It had to be a bit of a bittersweet day for Buffalo, N.Y., last month when the Toronto Blue Jays announced they would play most of their 2020 home games in the border city.
Aug 10, 2020 12:12 PM By: Canadian Press 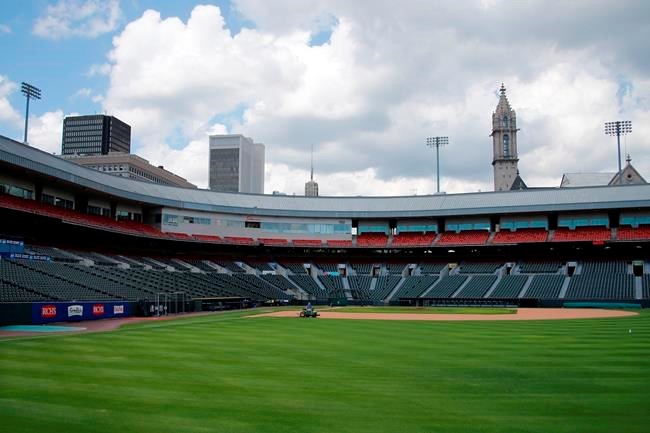 It had to be a bit of a bittersweet day for Buffalo, N.Y., last month when the Toronto Blue Jays announced they would play most of their 2020 home games in the border city.

But a smaller headline further down the page told another important part of the story: "Fans will have a hard time getting a glimpse of the Jays."

Because of restrictions by the federal government during the COVID-19 pandemic, the Blue Jays are calling the city just across the Peace Bridge from Fort Erie, Ont., home, starting Tuesday against the Miami Marlins. But there will be no fans at Sahlen Field — normally the home of Toronto's triple-A affiliate — preventing the kind of community gatherings and reactions that have been such a big part of Buffalo sports history.

One of the smallest cities in the United States to have teams in major North American pro sports leagues — the NHL's Sabres and NFL's Bills play in the 52nd biggest television market in the country — Buffalo fans have experienced their fair share of ecstasy and heartbreak over the years.

Both franchises were in danger of leaving town at times over the past few decades, with the latest potential move averted when Sabres owners Terry and Kim Pegula bought the Bills after founder Ralph Wilson died in 2014, beating out Donald Trump as well as a group featuring Toronto's Larry Tanenbaum and rocker Jon Bon Jovi. When the purchase was finalized, one fan burst into tears of joy when calling sports radio station WGR.

Here are five of the most memorable moments in Buffalo sports history:

Trailing 20-19 against the New York Giants in the 1991 Super Bowl with eight seconds left, the Bills lined up for a 47-yard field goal.

The kick had the distance, but Scott Norwood's attempt was wide right, giving the Giants the win in Tampa, Fla.

Back in Buffalo for a post-Super Bowl rally, the city's fans embraced Norwood.

"We're struggling with this right know. You know I am. But I know I've never felt more loved than right now," Norwood said.

It ended up being the first of four consecutive Super Bowl losses for the Bills.

Trailing 35-3 early in the second half of their 1993 AFC wild-card game against the visiting Houston Oilers without injured star quarterback Jim Kelly, the Bills' hopes of advancing to a third straight Super Bowl seemed shot.

Many fans left then-Rich Stadium in Orchard Park, N.Y., before backup quarterback Frank Reich led the Bills on a rally for the ages, giving Buffalo a 38-35 lead before Houston forced overtime with a field goal.

"Well, there was a lot of time left and there was a glimmer of hope, but it's about the same chance you have of winning the New York lottery," said former Bills coach Marv Levy, who got his start in pro coaching with the CFL's Montreal Alouettes, winning Grey Cups in 1974 and '77.

Many people in western New York couldn't watch the famous game live because of the local television blackout rule when NFL games didn't sell out — about 5,000 seats went unsold at the then-80,000-seat stadium.

Entering the playoffs on a seven-game losing streak, the Sabres were heavy underdogs against the Adams Division-winning Boston Bruins in 1993.

But Buffalo won the first three games of the series before falling behind 5-2 at home in Game 4.

In another thrilling Buffalo comeback, the Sabres rallied to force overtime before Toronto native Brad May scored the winner on a pass from Pat LaFontaine, sending the fans at the Memorial Auditorium into hysterics and giving the team its first playoff series victory in 10 years.

The call of the goal by longtime Sabres play-by-play man Rick Jeanneret is considered a classic.

On home ice for Game 6 of the 1999 Stanley Cup final against the Dallas Stars, the Buffalo Sabres went all the way to triple overtime, trying to force a winner-take-all clash in Texas.

Brett Hull's goal for Dallas at 14:51 of the third overtime came with his skate in the crease, often a no-no at that time in the NHL. Despite that, the refs allowed the goal to stand, giving the Stars the title.

NHL commissioner Gary Bettman has maintained it was the right call.

The people of Buffalo felt otherwise.

"I'm going to leave you with two words, it will be the final two words this summer. No goal," then-Sabres coach Lindy Ruff, a native of Warburg, Alta., said at a fan rally.

Leading 16-15 after a field goal with 16 seconds left in an AFC wild-card game in 2000, the visiting Bills looked poised for an upset against the Tennessee Titans.

But on the ensuing kickoff, Frank Wycheck threw a long lateral to Kevin Dyson, who ran it back 75 yards for a shocking touchdown to give the Titans a 22-16 win.

A review confirmed it was not a forward pass, something some Bills fans still debate.

The Bills made a controversial decision before the game, starting Rob Johnson at quarterback ahead of Doug Flutie after the former CFL star guided Buffalo to a 10-5 record before sitting out a meaningless season finale.

Wade Phillips, the Bills' coach at the time, has since said that the team's owner, Wilson, called for the QB switch.

After that game, the Bills went 17 years before their next playoff appearance, the longest drought in North American pro sports at the time.

This report by The Canadian Press was first published Aug. 10, 2020.

Bayern Munich already looking too good for the Bundesliga
Sep 21, 2020 9:17 AM
Sunday's Games
Sep 21, 2020 12:48 AM
Comments
We welcome your feedback and encourage you to share your thoughts. We ask that you be respectful of others and their points of view, refrain from personal attacks and stay on topic. To learn about our commenting policies and how we moderate, please read our Community Guidelines.