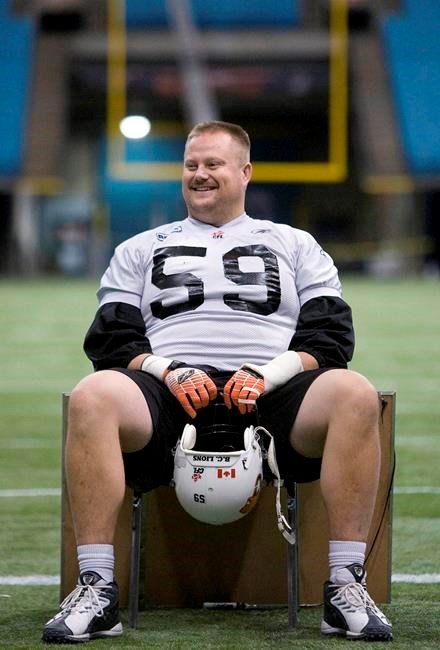 SURREY, B.C. — Kelly Bates knew he'd be starting a new job this week. He just didn't expect that job would be as the new offensive line coach for the B.C. Lions.

The club announced Saturday that the former Lions guard had been hired to replace Bryan Chiu, who was fired after the team started this season with a dismal 1-9 record.

Bates had been preparing for a new role as a teacher and football coach at a Vancouver high school when he was offered the position.

The 44-year-old was looking forward to teaching but couldn't pass up the opportunity to re-join the team where he played for seven seasons.

"I'm a professional coach. This is what I want to do," he said after his first practice with the Lions on Monday. "I've been out of work since the end of last season. And this is the position I play, the position I love. I have yet to do this on my own so I just felt this was a tremendous opportunity to grow myself, to come in and make a difference here and be part of an organization that's given me a lot over the years."

After wrapping up his playing career, Bates joined the Lions as an offensive assistant in 2011. He went on to coach the club's running backs for three seasons before taking over as head coach at Simon Fraser University in Burnaby, B.C., in 2015. Last season he worked with the Edmonton Eskimos as a quality control coach.

Now the Lions are hoping Bates can ignite an o-line that has allowed star quarterback Mike Reilly to be sacked a league-high 43 times this season.

"(Bates is) one of those old-school, no-nonsense guys, just one of those straight-laced guys," said B.C. coach DeVone Claybrooks. "We've got to develop that toughness and that moxie and that's what we're bringing him in for, to try and change the tide."

Reilly — who signed a $2.9-million, four-year deal with the club in February — has escaped serious injury so far this season despite the barrage of sacks, but his numbers have been impacted.

After leading the CFL in passing three seasons in a row, the 34 year old currently sits third in the league with 2,437 passing yards, nine touchdowns and 11 interceptions in the first 10 games of the year.

"Mike doesn't deserve — no man deserves — to stand back there and have those type of performances happen in front of him," said Lions GM Ed Hervey. "Regardless of what number of dollars he's making, the quarterback should be protected. The offensive line's job is to protect and that comes not only from man-to-man but scheming included."

The club's front office spent last week's bye thoroughly evaluating every aspect of the team and breaking down the priorities. They determined that the o-line, stacked with CFL veterans Sukh Chungh, Joel Figueroa and Hunter Steward, wasn't living up to expectations.

Instead, the group looked "confused" at times and seemed to be plagued by miscommunication, Hervey said.

He added that making a mid-season coaching change isn't ideal, but it was necessary to improve the team going forward.

"The toughest job on this team (this season) probably wasn't the head coaching job," Hervey said. "It was probably protecting Mike because that's where all eyes were going to go from the outset just because of the significance of the move this season. Unfortunately, so far, it hasn't panned out the way we had hoped."

Bates got his first opportunity to work with his new charges on Monday and immediately stripped the training back down to basics. He described his system and philosophies as being similar to former Lions o-line co-ordinator Dan Dorazio.

"It's like going to training camp again. You're trying to amalgamate your terminology with their terminology, make sure everyone can get on the same page quicker," Bates said. "Everything is based off basic technique with the addition of detail. And it's got to start somewhere."

The Lions are set to play the Alouettes in Montreal on Friday.

Ace Canadian esports driver Brooks tearing up the track online during COVID-19
May 24, 2020 1:03 PM
Comments
We welcome your feedback and encourage you to share your thoughts. We ask that you be respectful of others and their points of view, refrain from personal attacks and stay on topic. To learn about our commenting policies and how we moderate, please read our Community Guidelines.