WINNIPEG — Andrew Copp may have found his calling playing centre. Moving from the wing to the middle due to injuries, the Winnipeg forward has been a force for the Winnipeg Jets lately.
Feb 9, 2020 10:58 PM By: Canadian Press 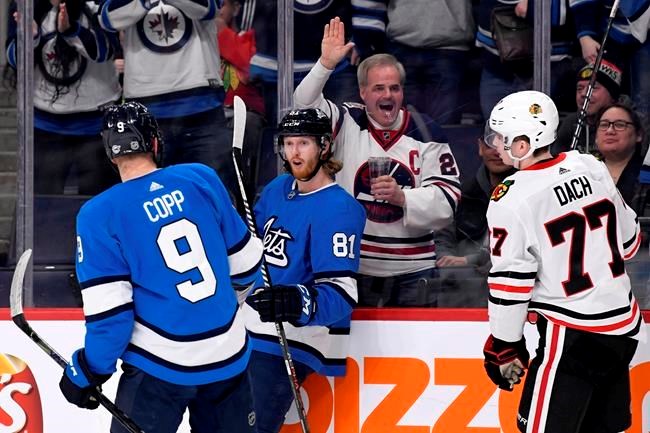 WINNIPEG — Andrew Copp may have found his calling playing centre.

Moving from the wing to the middle due to injuries, the Winnipeg forward has been a force for the Winnipeg Jets lately.

Copp scored the go-ahead goal as part of a four-goal third period, and the Jets came from behind to beat the Chicago Blackhawks 5-2 on Sunday.

Copp, who also set up the first goal, gave Winnipeg a 3-2 lead when he beat Chicago netminder Corey Crawford up high from in close with 6:33 left in regulation after taking a perfect pass from forward Jack Roslovic.

“I just tried to make a quick move and go upstairs,” Copp said. “Great, great pass by Jack. That’s a play where guys stay in the slot and look for that one-timer a lot, but (Erik) Gustafsson came out and really took that way, so I just saw some space behind him. And that pass was just fantastic, just to be on the same page as that. Great play by Rosie.”

“It’s getting better. Confidence is huge,” he said. “The role kind of changes sometimes, depending on matchup and obviously, linemates are all new. We’ve figured out a little bit of chemistry together between the three of us, every other game.”

Kyle Connor had a pair of goals while Blake Wheeler and Patrick Laine also scored for the Jets (29-23-5), who trailed 2-0 after 20 minutes.

Dominik Kubalik and Brandon Saad scored for the Blackhawks (25-21-8).

Connor, with his team-leading 28th goal of the year, and Laine scored empty-net goals to secure the win.

Connor Hellebuyck made 24 saves for the Jets, who won their third straight game, while Crawford stopped 33 shots for Chicago.

Just 16 seconds after Chicago captain Jonathan Toews went off for hooking in the third, Wheeler took a pass from defenceman Neil Pionk and snapped the puck past Crawford to tie the score 2-2.

The Jets had pulled to within 2-1, scoring while shorthanded.

With defenceman Sami Niku off for tripping, Copp pounced on a loose puck inside his own blue line, skated the length of the ice, then backhanded a saucer pass to Connor, who shot the puck on the bounce past Crawford.

“I think Copper might be a centre, you know?” Wheeler said. “He seems to thrive in the middle … I think there’s a 200-foot element to his game. He makes a lot of really good plays, the little detailed plays that keep the puck moving in the right direction. Offensively, he’s getting more confidence with that puck and making some good plays.”

Kubalik scored just 15 seconds into the game when he converted a pass from behind the net from centre Drake Caggiula.

Toews assisted on that first goal to give him his 800th career point.

“That’s a nice stepping-stone, nice to get a big number like that here in my hometown of Winnipeg, but unfortunately, we couldn’t get the two points,” Toews said. “We were looking good the first shift of the game. I thought it was going to be one of those nights, but I think they bounced back and obviously played their best late in the game.”

The Blackhawks simply relaxed after taking the 2-0 lead.

“I think we just lost a lack of focus there,” said Saad. “We need to play all 60 minutes. We know how big the game is. Just because we started off well, we obviously took our foot off the gas. They scored a nice short-handed goal and kind of took it to us the rest of the game.”

It was the second of a six-game homestand for the Jets. They are now 14-12-3 at home this season.

NOTE: The Jets will induct Thomas Steen and Randy Carlyle into their Hall of Fame when they host the New York Rangers on Tuesday.

This report by The Canadian Press was first published Feb. 9, 2020

Flames defeat Jets 4-0 to win NHL qualifying series three games to one
Aug 7, 2020 2:14 AM
Thursday's Games
Aug 7, 2020 1:37 AM
Comments
We welcome your feedback and encourage you to share your thoughts. We ask that you be respectful of others and their points of view, refrain from personal attacks and stay on topic. To learn about our commenting policies and how we moderate, please read our Community Guidelines.