OTTAWA — One of the companies making ventilators for the federal government is expanding its production capacity more than tenfold to meet demands created by the COVID-19 pandemic.
0
Apr 9, 2020 5:30 PM By: Canadian Press 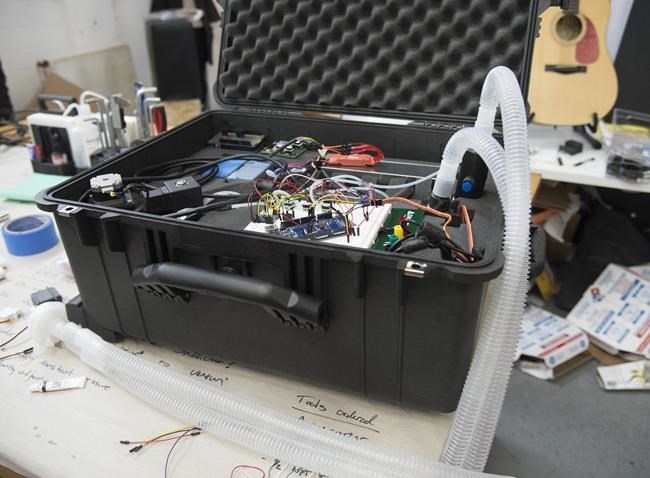 OTTAWA — One of the companies making ventilators for the federal government is expanding its production capacity more than tenfold to meet demands created by the COVID-19 pandemic.

Another one has never been part of making ventilators before but is working with several other companies to update an old prototype and get as many as 10,000 new ventilators built in a matter of months.

It's all part of the federal government's drive to add as many as 30,000 ventilators to Canadian intensive care units in the battle against COVID-19. Prime Minister Justin Trudeau announced the plan Tuesday, saying Ottawa was working with Thornhill Medical in Toronto, CAE in Montreal, Starfish Medical in Victoria, and a consortium known as Ventilators for Canadians.

Ventilators are artificial breathing machines which help people who are too sick to breathe on their own. The most critically-ill COVID-19 patients require ventilators when pneumonia attacks their lungs too harshly.

In Italy and Spain, two of the countries hit hardest by the pandemic, the number of patients needing ventilators quickly exceeded the number of devices available, forcing doctors to make gut-wrenching decisions about who would get the artificial support and who would be left to almost certainly die.

Thornhill Medical CEO Lesley Gouldie said Wednesday normally her Toronto-based company would produce at most 50 ventilators in a month, but is scaling that up to as many as 500 a month with help from Guelph, Ont.-based manufacturer Linamar.

"It's been an extremely intense period for our company," Gouldie said in an interview with The Canadian Press.

"We're working very hard in conjunction with our manufacturing partners to get these into the hands of Canadians as soon as possible. People are literally working night and day to make that happen."

Thornhill has already shipped eight and Gouldie said more will go out this month and most of the ones Linamar produces will begin to be available in May. In all, Thornhill has a contract for 1,020 devices, with the government considering an order for 900 more.

Canadian hospitals had an estimated 5,000 ventilators at the outset of the outbreak and every province is trying to get more. Several hundred patients are already on ventilators in intensive-care units, and thus far the health system has coped.

If physical distancing is strictly adhered to, most models of the pandemic in Canada already released suggest there will be an adequate supply of ventilators. If Canada doesn't stay close to the best-case scenarios, Canadian doctors will face the same drastic choices of their Italian and Spanish counterparts.

Scott Phillips, CEO of Starfish Medical, said his company is the "pre-eminent" medical-device design company in Canada, but until now ventilators were not among its products. In mid-March, a government-funded industrial "supercluster" group approached Starfish about working with a Winnipeg company that created a ventilator prototype 20 years ago that it thought could help, with some updating.

Starfish and Winnipeg's Cerebra Health are now working together to bring the "Winnipeg ventilator" back to life and, within weeks, start producing thousands of them.

"It's crazy," Phillips said, of the speed with which it is all happening.

Starfish is working with multiple manufacturers to actually produce the machines.

Gouldie said the key element for her company is partnering with Linamar, which normally makes machine parts and motors for cars, boats, wind turbines and farm equipment. Thornhill has the design and technical expertise, while Linamar is bringing its skill at sourcing needed materials, and manufacturing in larger numbers, said Gouldie.

Gouldie said one of the key challenges is finding the supplies for the 1,500 components that go into each ventilator.

"Every day there has been a different challenge and every day we have worked through the challenge," she said.

Both Thornhill and Starfish say they are getting lots of calls from people all over the world wanting help to fight COVID-19, but both are focused on Canada's needs first.

"We've absolutely been approached by companies or organizations on every single continent," Gouldie said. "It's been quite extraordinary, the range, the geographic diversity of people that have reached out to us, wanting to know if they can access our technology."

Note to readers: This is a corrected story. A previous version that the government had signed a letter of intent for 900 more ventilators from Thornhill Medical.