StatCan to detail March jobs and WHO on defensive; In The News for April 9 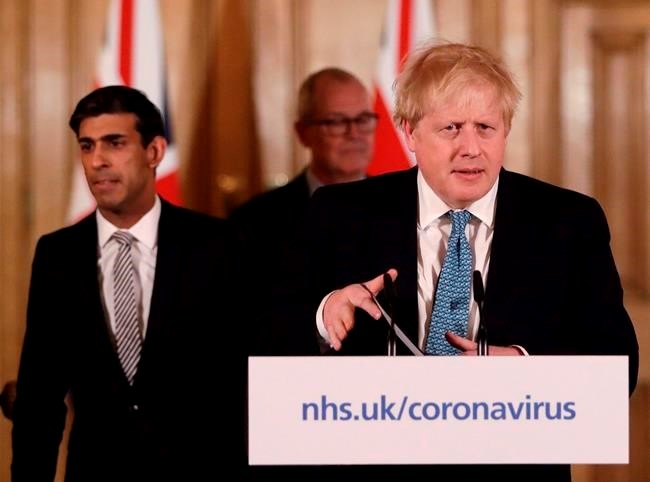 In The News is a roundup of stories from The Canadian Press designed to kickstart your day. Here is what's on the radar of our editors for the morning of April 9 ...

Canada's national statistics agency is set this morning to release a snapshot of the labour force from March as the COVID-19 virus plunged the country into economic uncertainty.

The report will provide a picture of employment for the third week in March just as companies began closing shop and laying off staff to curb the spread of the novel coronavirus disease.

Statistics Canada says it has retooled some of its usual measures to better gauge the effects of COVID-19 on the job market because its traditional definitions of employed, unemployed and not in the labour force "may not fully capture some aspects of the impact" from the pandemic.

The survey, for example, will exclude the more commonly observed reasons for absent workers — such as vacation, weather, parental leave or a strike or lockout — to better isolate the pandemic's effect.

Still, there is a general expectation that the figures will show massive losses and a large spike in the national unemployment rate.

BMO chief economist Douglas Porter wrote in a note last week that his team was predicting 600,000 jobs lost in March, which would be five times higher than the worst single-month drop in the survey's history, recorded in January 2009.

Canadians will get a double-barrelled blast of grim news today: the first jobless numbers since the COVID-19 pandemic shuttered businesses from coast to coast as well as the first national picture of how bad the crisis could get and how long it could last.

Statistics Canada, meanwhile, is poised to release the first jobless numbers since the pandemic started tossing millions of Canadians out of work.

The unemployment rate stood at 5.6 per cent in February.

But since those heady days, unemployment has skyrocketed as governments ordered all but essential businesses to close and their workers to stay home in an effort to contain the spread of the virus.

The government says it received 966,000 applications for the Canada Emergency Response Benefit on Monday alone — the first day a new web portal for applications was open.

In a heartfelt plea for unity, the World Health Organization's chief sought to rise above sharp criticism and threats of funding cuts from U.S. President Donald Trump over the agency's response to the coronavirus outbreak.

The vocal from the WHO director-general came a day after Trump blasted the U.N. agency for being "China-centric" and alleging that it had "criticized" his ban of travel from China as the COVID-19 outbreak was spreading from the city of Wuhan.

Tedros Adhanom Ghebreyesus, an Ethiopian and the WHO's first African leader, projected humility and minimized his personal role while decrying invective and even racist slurs against him amid the organization's response to the disease. The new coronavirus has infected more than 1.4 million people and cost over 83,000 lives around the globe.

"Why would I care about being attacked when people are dying?" he said. "I know that I am just an individual. Tedros is just a dot in the whole universe."

He dodged questions about Trump's comments, while acknowledging the agency was made up of humans "who make mistakes," and insisted his key focus was saving lives, not getting caught up in politics.

"No need to use COVID to score political points. You have many other ways to prove yourself," Tedros said. "If you don't want many more body bags, then you refrain from politicizing it."

British Prime Minister Boris Johnson remains in intensive care with the coronavirus but is improving and sitting up in bed, a senior government minister said, as the U.K. recorded its biggest spike in COVID-19 deaths to date.

Johnson, the first world leader diagnosed with the disease, has spent two nights in the ICU at St. Thomas' Hospital in London.

"The latest from the hospital is the prime minister remains in intensive care where his condition is improving," Sunak said at a news conference. "I can also tell you that he has been sitting up in bed and engaging positively with the clinical team."

That glimmer of good news came as the number of COVID-19-related deaths in Britain approached the peaks seen in Italy and Spain, the two countries with the greatest number of fatalities.

The figures may not be directly comparable, however. Not all the U.K. deaths reported each day occurred in the preceding 24 hours, and the total only includes deaths in hospitals.

Broadway producers have extended the suspension of all shows on the Great White Way, saying musical and plays will stay shuttered through June 7 in accordance with latest medical guidance.

Broadway abruptly closed on March 12 and announced plans to reopen the week of April 13.

But that timetable is increasingly looking too optimistic as the city saw an alarming surge in deaths.

"Our top priority continues to be the health and well-being of Broadway and the thousands of people who work in the industry every day, including actors, musicians, stagehands, ushers and many other dedicated professionals." says Charlotte St. Martin, president of the Broadway League.

Already some shows scheduled to open this spring have abandoned plans of ever returning, including "Hangmen" and a revival of Edward Albee's "Who's Afraid of Virginia Woolf?"

Others — like revivals of "Caroline, or Change" and "Birthday Candles" — have been moved to the fall.

CCM has joined the list of hockey equipment manufacturers contributing supplies to front-line health care workers in the COVID-19 pandemic.

The Montreal company and its player endorsee roster that includes Connor McDavid and Sidney Crosby will donate 500,000 surgical masks.

CCM "is in the process of procuring this protective equipment from its established network of partners that normally collaborate in the production of CCM hockey gear," the company says.

"CCM will arrange for transport and is co-ordinating with government authorities to ensure the protective medical gear is distributed to Canadian healthcare workers as early as the week of April 27th."