TORONTO — COVID-19 has slammed Canada’s fashion sector like a hurricane, causing serious damage and likely leaving a few casualties in its wake.
Jul 3, 2020 11:15 AM By: Canadian Press 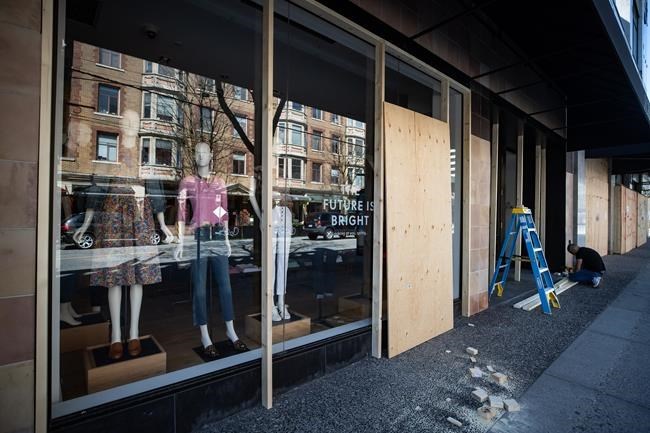 TORONTO — COVID-19 has slammed Canada’s fashion sector like a hurricane, causing serious damage and likely leaving a few casualties in its wake.

The mass closing of malls and offices along with the cancellation of celebrations and big events has been devastating, says the head of Harry Rosen, one of the country’s leading men's clothing retailers.

"It's been very, very strong, but it still doesn't make up for our national retail footprint."

Rosen said the coronavirus has accelerated trends facing the sector, including the growing "casualization" of the workplace and e-commerce sales.

"I mean, people aren't wearing a sports jacket when they're working from home," he said.

While some office-wear sales may never come back even after offices reopen, Rosen believes most will because there will always be times for people to dress up for business or special occasions.

The company has responded to the challenges by taking advantage of federal support programs, cutting costs, shoring up its liquidity and marking down products earlier, with the summer sale starting before Father's Day.

Rosen said the 66-year-old company will continue but competitors that came into the crisis with a lot of debt will be at risk.

"I think a number of companies will seek statutory protection. I don't believe it's over. I believe there's still more to go."

Reitmans (Canada) Ltd. announced last month that it will close two of its retail chains and lay off roughly 1,400 workers as the company continues a restructuring amid the pandemic.

The Montreal-based retailer plans to shutter its 77 Addition Elle stores on Aug. 15 and 54 Thyme Maternity locations on July 18.

Modasuite Inc., which operates Frank and Oak, recently filed a notice of intention that it plans to file a proposal under the Bankruptcy and Insolvency Act.

Total retail apparel sales will decrease 28 to 32 per cent in 2020, while luxury apparel sales should drop 16.8 per cent, says Trendex, a marketing intelligence company specializing in the Canadian and Mexican apparel markets.

It expects 10 to 15 major apparel chains will either close or drastically reduce their retail footprint.

"Bottom line apparel retailing five years from now will be almost the same as it is today," it wrote in its monthly report, adding that sales will not revert to 2019 levels until 2023.

Luxury brands like Harry Rosen aren't likely to be hurt as much as the mid- to lower-end apparel and footwear retailers, says Bruce Winder, a retail analyst and author of the book "Retail Before, During and After COVID-19."

"Some of the losers will be sort of those folks who are living at the margin," he said in an interview.

"They're not the best brand, they have a bit of a weak value proposition and their balance sheet was a little weak before all this hit. All this is doing is it's pushing them over the edge."

Among the chains that are likely hurting is Hudson's Bay, said Winder, which may be forced to reduce its national footprint by 30 to 40 per cent.

"They are hurting big time. The Bay is literally sinking quickly and we don't see the carnage because they aren't public anymore."

The chain, which recently reopened its Canadian stores and Saks locations, didn't respond to requests for comment.

Strong fashion retailers like Aritzia Inc., H&M and Zara have been hit but will survive, Winder added.

Vancouver-based Aritzia said while interest in casual wear has increased as clients adapted to working from home, it believes there will be an appetite to refresh wardrobes as social and work environments reopen.

He noted that e-commerce sales grew by more than 150 per cent after its 96 stores were closed in mid-March.

The virus's impact on the retail industry has been "without precedent" but the company's financial position is strong and the affinity for its brands will help it to weather the storm, Hall recently told analysts, adding he's expected a "long slow ramp" to a new normal.

Working from home has also been positive for yoga pants maker Lululemon Athletica Inc,. which has seen one of the largest quarterly gains in market share in recent years, says CEO Calvin McDonald.

"A new normal emerged, and we were encouraged to see how quickly our guests were embracing both working and sweating from home," he said during a quarterly earnings call.

Unlike some fashion retailers, Lululemon has a high percentage of core products with a shelf life beyond the current season and has limited markdown risk.

McDonald believes virtual workouts will continue even as studios reopen and be part of the lifestyle shift to less formal wear.

Roots Corp. said it experienced the same benefit from a change in individual habits as business shifted to work from home.

"We benefited from higher demand for our extensive sweats offering in our online channel. To capitalize on this demand, we created a new sweats focus section of our website," said CEO Meghan Roach.

She said there was a little extra pickup in sales of sweats for men as they sought comfort "below the screen."

One of the tools retailers have used to offset the challenges is to renegotiate monthly rents.

Roach said Roots didn't pay its April rents and will assess each store's profitability to determine "the right store footprint for us to have in Canada, and how we balance it off ... with our e-commerce business."

Rosen also expects to see its retail footprint reduce over time after closing one store when the lease expired.

"Over time, I think it'll be reduced and particularly as online is becoming such a much bigger share of our business."

This report by The Canadian Press was first published July 3, 2020.

Materials sector weighs on Toronto market as gold price falls again
Aug 14, 2020 4:55 PM
Comments
We welcome your feedback and encourage you to share your thoughts. We ask that you be respectful of others and their points of view, refrain from personal attacks and stay on topic. To learn about our commenting policies and how we moderate, please read our Community Guidelines.