Cruise stranded by virus fears ends with roses in Cambodia

SIHANOUKVILLE, Cambodia — After being stranded at sea for two weeks because five ports refused to allow their cruise ship to dock, the passengers of the MS Westerdam were anything but sure their ordeal was finally over.
0
Feb 14, 2020 8:14 PM By: Canadian Press 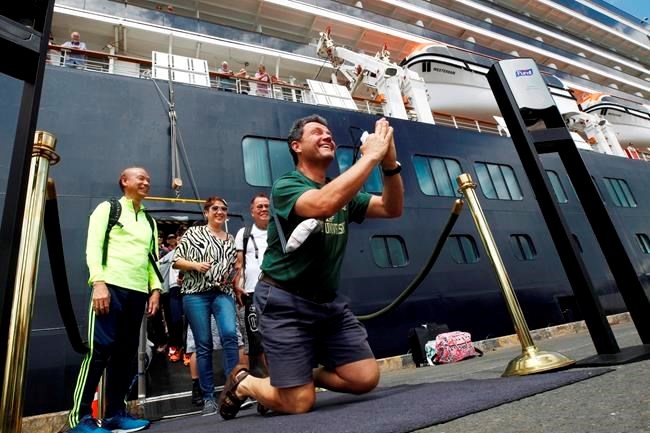 SIHANOUKVILLE, Cambodia — After being stranded at sea for two weeks because five ports refused to allow their cruise ship to dock, the passengers of the MS Westerdam were anything but sure their ordeal was finally over.

Then the authoritarian leader of Cambodia, Prime Minister Hun Sen, agreed to let the Westerdam dock. Thailand, Japan, Taiwan, the Philippines and Guam had earlier turned the ship way because they feared its passengers and crew could spread the deadly new virus from China, but Hun Sen declared he would welcome them.

The first batch of hundreds of passengers who disembarked Friday saw the Cambodian leader arrive by helicopter and then personally hand them flowers as they made their way to land.

“Today, although Cambodia is a poor country, Cambodia has always joined the international community to solve the problems that the world and our region are facing,” Hun Sen said as the first passengers disembarked.

The grateful passengers sang his praises.

“How wonderful it is to be here. Thank you very much to the prime minister. He has a wonderful heart,” said Anna Marie Melon, from Queensland, Australia. “I’m very excited (to be here)," she said as she waved a rose Hun Sen had handed to her.

The passengers cheered as they walked toward waiting buses and waved goodbye to other passengers watching from the ship’s deck.

"Cambodia alone, even the United States, Guam, did not let us land, but Cambodia did, so that’s wonderful. Absolutely wonderful," Joe Spaziani, from Florida, told reporters. "We appreciate it very very much. It’s been a long struggle and we appreciate everyone being here.”

He and many other passengers wore a krama, a traditional Cambodian scarf, around their necks.

John Stanley, of Evesham in England, who with his wife Olive had been on the ship since it departed from Singapore in January on the first leg of its journey, recounted some of the stresses of the last two weeks.

After some uncertainty, they came to accept the ship's doctor's declaration that none of the passengers had the feared COVID-19 viral illness.

But there was concern that some people's supplies of necessary medication would run out and there were many text messages from worried family members back home..

“So it was a question of being really, really thankful to the Cambodian government and really, really relieved that we can go home," Stanley said. “To be honest, until we'd actually gone off the ship, we didn't really believe it because we had one or two situations before where we thought we were getting off.”

The Westerdam's operator, Holland America Line, had said no cases of the virus had been confirmed among its 1,455 passengers and 802 crew members. Some 20 passengers reported stomachaches or fever, but tests for the virus done at the Pasteur Institute in Phnom Penh showed none had the illness.

Hun Sen said he acted for humanitarian reasons and that he wanted passengers to be able to return to their home countries.

“If Cambodia did not allow this ship to dock here, where should this ship go?” he said. "I want to inform Cambodians and the world that I coming here even for a short time means this is no time for discrimination and to be scared, but a time for everyone to be in solidarity to solve the problems we are facing now."

A strong supporter of China, Hun Sen has downplayed threats from the new virus, and unlike other Asian nations, he declined to ban direct flights between Cambodia and China, saying that would disturb bilateral relations and hurt his country's economy. Cambodia has only one confirmed case of the virus, a visitor from China, despite its popularity with Chinese tourists.

The decision to let the passengers disembark also won Cambodia praise from President Donald Trump, who tweeted: “Thank you to the beautiful country of Cambodia for accepting the @CarnivalCruise ship Westerdam into your port. The United States will remember your courtesy!”

Acting as a good Samaritan is an unusual role for Hun Sen, who has been in power for 35 years. His party swept 2018 elections that drew sharp condemnation as neither free nor fair after a court dissolved the only credible opposition party.

The U.S. has imposed diplomatic sanctions due to Cambodia's repressive political climate, and the European Union earlier this week declared its intention to do the same, citing human rights and trade union violations.

Taking advantage of the opportunity to boost his country's tourism profile, Hun Sen said the passengers were free to go to the beach, go sightseeing in Sihanoukville, where the ship docked, or even visit the famous centuries-old Angkor Wat temple complex in the northwest.

Mang Sineth, the vice governor in Preah Sihanouk province, told reporters 414 passengers were to leave the port Friday and fly to Cambodia's capital before to their final destinations. Three flights from Sihanoukville to Phnom Penh were arranged to take all the ship's passengers.

He said that if the flying arrangements went smoothly, all passengers would probably be leaving Sihanoukville by Sunday.

The COVID-19 illness has sickened tens of thousands of people in China and a few hundred elsewhere, including 218 on the Diamond Princess cruise ship, which made stops in Hong Kong and other ports before arriving in Japan last week, where it has been quarantined.

The Westerdam began its cruise in Singapore last month and its last stop before it was refused further landings was in Hong Kong, where 56 cases of the disease and one death have been confirmed. Several hundred new passengers boarded the ship there for the second leg of the planned monthlong cruise.

Gildan boosts dividend despite weaker Q4, 2019 profits and revenues
Feb 20, 2020 1:34 PM
Comments
We welcome your feedback and encourage you to share your thoughts on this story. We ask that you be respectful of others and their points of view, refrain from personal attacks and stay on topic. To learn about our commenting policies and how we moderate, please read our Community Guidelines.