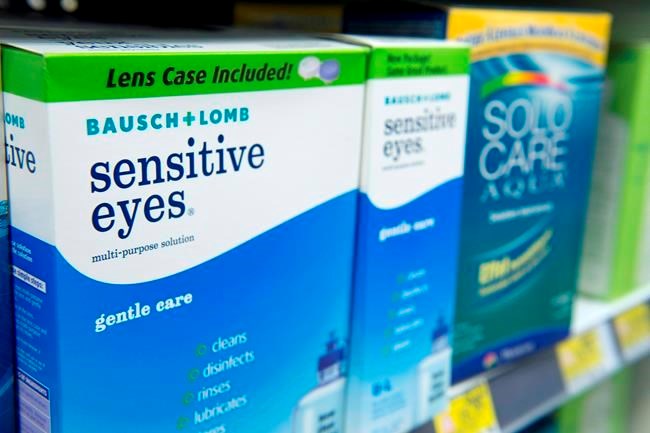 The firm, based near Montreal in Laval, Que., said the spinoff of Bausch + Lomb would allow it to focus on its gastroenterology, aesthetics/dermatology, neurology and international pharma business.

Bausch Health also said Thursday it sold about US$4 billion in non-core assets, paid down more than US$8 billion of debt, resolved many legacy legal issues and lost patent protection on about US$1.4 billion of products.

Chairman and CEO Joseph Papa said details of the spinoff, including its leadership and capital structure, have not yet been determined.

"We've looked at the value of our pure health companies like Alcon and Cooper and believe that Bausch + Lomb would compare very favorably when investors have an opportunity to make a judgment about the relative value of the stand-alone business," Papa said.

He declined to offer a timeline, but said during a conference call that "it usually takes somewhere around one-and-a-half years" to carry out comparable spinoffs.

The spinoff has positive credit implications, according to Moody's Investors Service.

"This is because the transaction has the potential to be deleveraging if meaningful cash proceeds are used for debt repayment," the credit rating agency said in a statement.

"However, the capital structures of the two entities have yet to be determined. In addition, the business risks of the remaining entity would increase because of significantly smaller scale, reduced diversity and lower organic growth."

On Wednesday, Bausch said it wrapped up key legal issues that date back to its time under the Valeant banner, agreeing to pay $94 million plus administration fees to settle a class-action lawsuit.

The 2015 case in Quebec Superior Court alleged violations of Canadian securities laws in the wake of a plunge in the company's stock price roughly five years ago.

As part of the settlement, the company and the other defendants admit no liability and reject all allegations of wrongdoing.

On Thursday, Bausch announced it lost US$326 million or 92 cents per diluted share in the second quarter, compared with a loss of US$171 million or 49 cents per share in the prior year as it felt the effects of the COVID-19 pandemic.

Bausch had been expected to report a net loss equal to 59 cents per share on US$1.79 billion of revenues, according to financial data firm Refinitiv.

Companies in this story: (TSX:BHC)