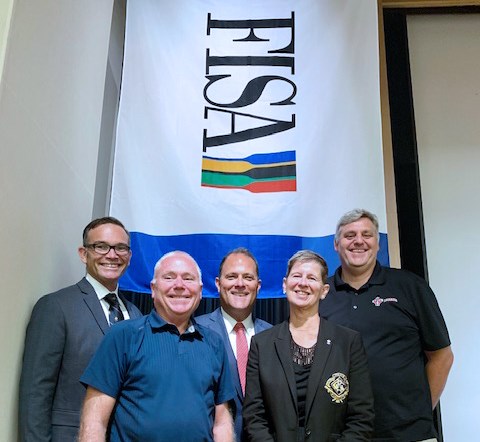 “This is a great day for rowing in St. Catharines and Canada,” said Mayor Walter Sendzik, who was in Linz, Austria for the vote. “There have been a lot of people working hard to secure this bid led by Bill Schenck, co-chair of St. Catharines World Rowing. It was a true St. Catharines team effort.”

Schenck, a member of FISA and a leader in the St. Catharines rowing community, joined Mayor Sendzik in Linz for the event.

“I am very excited that today the FISA Congress voted to support the decision of FISA Council that Canada was the most suitable candidate to host the World Championships in 2024. I would like to acknowledge the hard work of the team that has prepared the bid, especially the City of St. Catharines staff,” said Schenck. “It was a pleasure to have Mayor Sendzik accompany me as we worked to secure votes from the federations for winning this bid. His presence at this year’s World Championships helped put us over the top. The St. Catharines World Rowing Committee looks forward in welcoming the world of rowing all back to St. Catharines in 2024.”

St. Catharines has hosted two World Rowing Championships, in 1970 and 1999.

“We are pleased and excited to see that the 2024 World Rowing Senior, Under 23 and Junior Championships were attributed to St. Catharines at Congress in Linz,” said Terry Dillon, CEO of Rowing Canada, who was also at the World Championships. “Rowing Canada would like to thank the community in St. Catharines for its support and hard work in putting together such a strong and successful bid. We know how important it is for athletes to get the chance to compete on home soil and for our next generation of rowers to be inspired by seeing, firsthand, competition of the highest level. We look forward to welcoming the world of rowing to St Catharines and know that we will enjoy an amazing event."

“I am thrilled that we are going to be bringing the World Championships back to St. Catharines,” said Purcer. “We know that we have an amazing facility and a passionate community that will make for another memorable event for the athletes, the supporters and for World Rowing.”

The St. Catharines bid – built on the success of previous World Rowing Championships held in the city, along with the 137 years of the Henley Regatta, 2015 Pan Am Games and the upcoming 2021 Canada Summer Games, demonstrates that St. Catharines is world-class ready when it comes to hosting and organizing events of this magnitude.

“The bid from St. Catharines was of the highest quality,” said Matt Smith, executive director of FISA. “We were impressed by the care and commitment we witnessed in the attribution process and we are pleased to be looking forward to another successful World Rowing event in Canada. Congratulations to St. Catharines and Rowing Canada.”

Now, the preparation to welcome the world to St. Catharines begins.