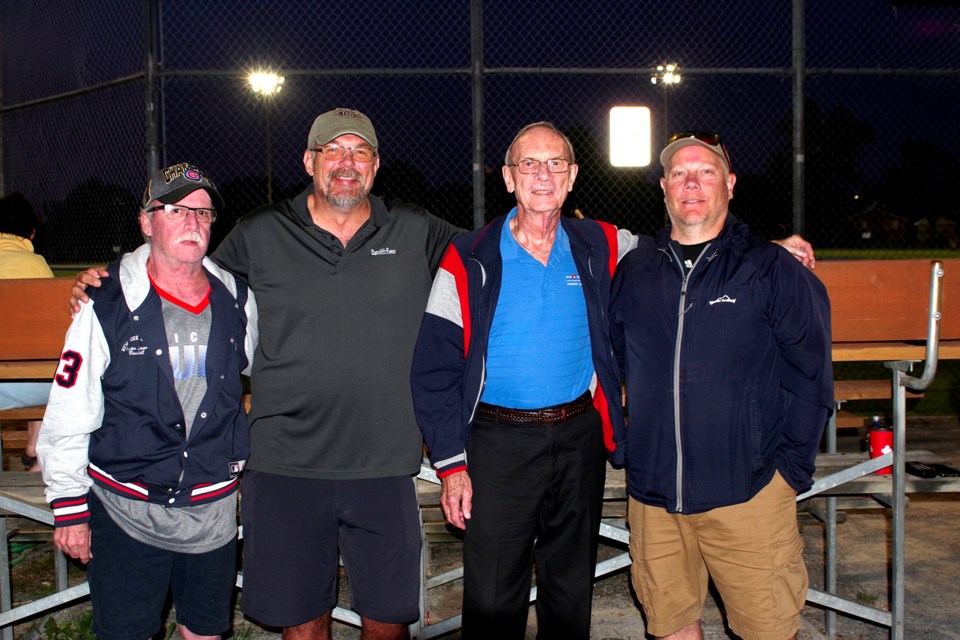 Legion ball alumni gathered for a reunion and shared some memories with the Thorold News. Bob Liddycoat / Thorold News

The Thorold Legion Minor Baseball executive invited alumni back to McMillan Park for its first reunion.

The gathering took place during the OBA Senior tournament over the Labour Day weekend and president Fred Matheson hopes that it will become a tradition.

A few of those attending shared some memories with the Thorold News.

Steve Babela was a Legion Ball executive member for 10 years.

“For me, the best times were when the Northeast, Pennsylvania (league) came up here to play at Sullivan Park; watching the kids play and the camaraderie with the boys and girls. It was fantastic,” he said.

“I was also president for two years and enjoyed it immensely. I haven’t been out here in a few years, so being at the ball diamond brings back a lot of memories,” he said.

Ken Sentance played ball most of his life, continuing in junior and senior baseball after minor ball.

He shared, “My best baseball memories were always playing on Labour Day; either here or playing away. My closest friends are still my former baseball friends, and Labour Day was my favourite time of year.”

Babela and Greg Cosgrove recounted how they became involved,

“Around 1990, the executive of the day were all leaving so a group led by Darrin Hale stepped up to make sure baseball didn’t fold in Thorold. We said we were going to keep it going. When your kid looks at you and says, ‘Dad can you save baseball?’ of course you say yes,” he explained.

Cosgrove was among that group of new executives.

“I played in Merritton when I was younger, but moved to Thorold, where I played and coached,” he said.

He, too, remained on the executive for about 10 years.

“It was a lot of work but it was fun with a lot of good times.”

Paul Price had to dig a little deeper for his memories.

“It was some 60 years ago so it’s a bit tough to remember everything,” he laughed.

“I played for two or three years and always at McMillan Park. I either pitched or played centre field. Dave Riddle was my coach and he was a great coach. He taught me a lot. Of course, in those days there was not a lot going on on the mound. We just had a curve ball or a fast ball; there was nothing like a slider or anything fancy.”

And although his memories stretch back into the 1950s and 60s, he will never forget, “We had a lot of fun with a lot of good guys. And it was right here at this park.”

And the Corvairs keep rolling along
Jan 10, 2020 3:00 PM
Comments
We welcome your feedback and encourage you to share your thoughts on this story. We ask that you be respectful of others and their points of view, refrain from personal attacks and stay on topic. To learn about our commenting policies and how we moderate, please read our Community Guidelines.