The third-place Falcons stay six points ahead of the fifth-place Hawks
0
Jan 3, 2020 8:00 AM By: Bob Liddycoat 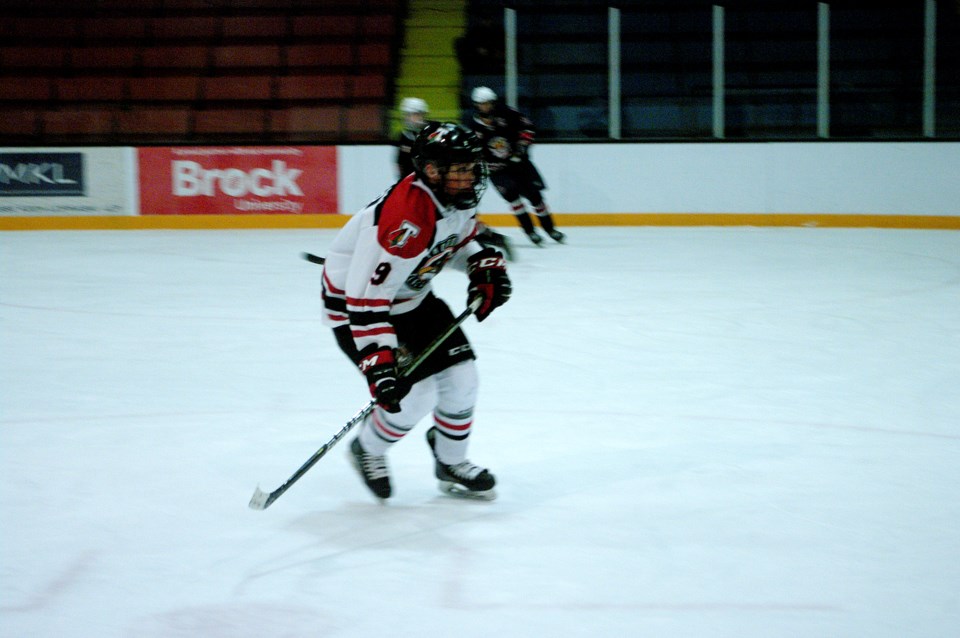 Nicholas Rubino got Thorold on the scoreboard first, but the Falcons took the win. File Photo Bob Liddycoat

If there was no second period last night, the Thorold Jr. B Blackhawks would have edged the visiting St. Catharines Falcons by a 3-2 score. Unfortunately, there was a second frame and the Falcons went home with a 7-4 win.

Thorold headed into the dressing room with a 2-0 lead after the first period on goals by Nicholas Rubino and Dylan Scriver.

The second period was all St. Catharines as they notched 5 goals on 12 shots and took a 5-3 lead by the end of the period.

Penalties hurt the Hawks as three of the Falcon goals were on the power play.

St. Catharines got two more in the third from Adam Cherepacha and Zavier Drummond while Mitch Britton replied for the Hawks.

Chase Grsic started in the Thorold goal but was pulled in favour of Noah Fortuna after allowing 6 goals on 19 shots. Fortuna blocked eight of nine.

Blair Coffin stopped 24 of 28 shots to get the win in the Falcons' goal.

Falcon Curtis Egert was the game's first star, Zavier Drummond was second star and Brett Bessette of the Hawks was the third star.

On Thursday, Jan. 9 the Hawks will host the first-place Caledonia Corvairs. Game time is 7:07 p.m.

Hawks hold off Meteors
Dec 20, 2019 8:00 PM
Comments
We welcome your feedback and encourage you to share your thoughts on this story. We ask that you be respectful of others and their points of view, refrain from personal attacks and stay on topic. To learn about our commenting policies and how we moderate, please read our Community Guidelines.