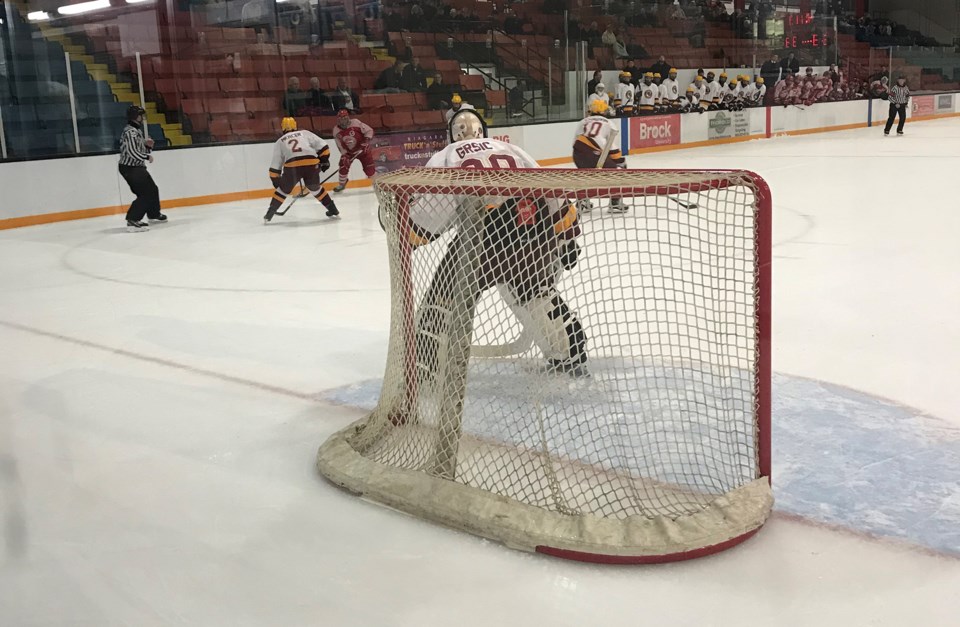 Thorold's Chase Grsic blocked 36 of 40 shots but it wasn't enough as the Hawks dropped a heartbreaker. Ethan Wong / Thorold News

In the Battle of Burleigh Hill, the St. Catharines Falcons nipped the Thorold Blackhawks 4-3 last night at the Thorold arena.

The game could hardly have been closer. The match was decided in the second overtime period.

Besides the one goal difference there was also a one-shot difference with Thorold getting the edge, outshooting the Falcons 41-40. It wasn’t until midway through the second period that Michael Santini broke the scoreless tie, giving the Falcons a 1-0 lead.

The Hawks outscored the Falcons 3-2 in the third period to send the game into overtime knotted at 3.

Then Xavier Drummond scored, unassisted in the second overtime period, to give St. Catharines the win.

The game featured hockey as the teams stayed away from the penalty box. St. Catharines was assessed a total of 8 minutes, while Thorold took 4 minutes in penalties.

Chase Grsic stopped 36 of 40 shots for Thorold while Blair Coffin blocked 38 of 41 for the Falcons. The game's three stars were Drummond, Nicholas Rubino (Thorold) and Coffin.

With the win, the Falcons pulled into a tie with the Hawks in the standings. Each team has 19 points tied for fourth place in the Golden Horseshoe Conference.

Thorold travels to Fort Erie for a 7:15 game on Saturday before returning home Thursday, Oct. 31 to host Hamilton.