It’s the first time in the history of the Brock women’s basketball program the award has been won
0
Mar 5, 2020 6:00 PM By: ThoroldNews Staff 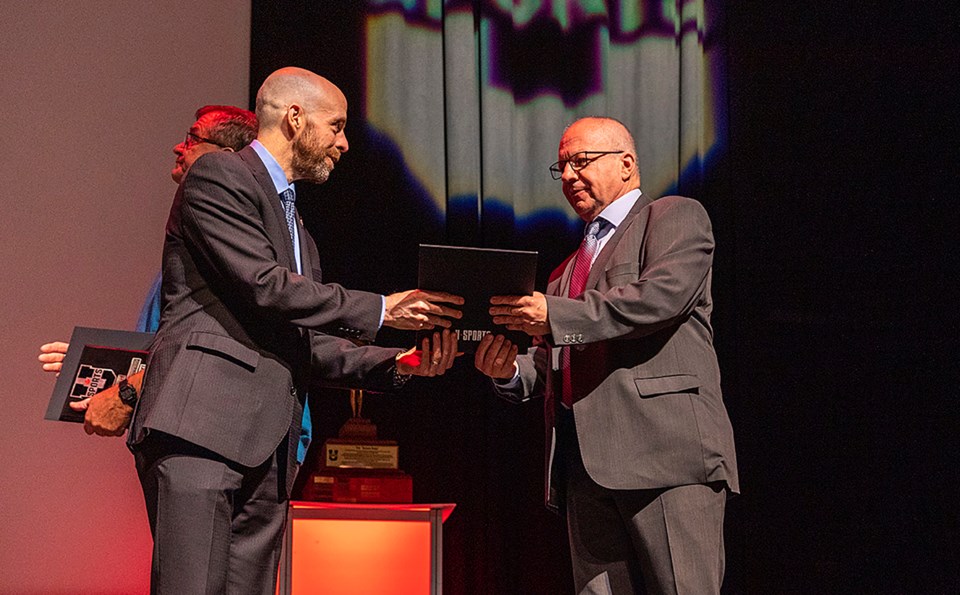 Brock women's basketball head coach Mike Rao is awarded the Peter Ennis Award as the Women's Fox 40 Coach of the Year by Carleton University President Benoit-Antoine Bacon during the All-Canadian Gala at the 2020 U SPORTS Final 8 Basketball Championships at the Canadian Museum of History on Wednesday, March 4. Photo provided by Brock University

Anyone in the hallways of the athletics department at Brock University in St. Catharines, Ontario will tell you how loyal Rao’s team is and just how much respect they have for the Welland native, who took over the reigns as head coach in 2018.

Not surprisingly, the Badgers erupted on Wednesday night in Ottawa when Rao was awarded the Peter Ennis Award as the Women’s Fox 40 Coach of the Year during the All-Canadian Gala at the 2020 U SPORTS Final Eight Basketball Championships.

It’s the first time in the history of the Brock women’s basketball program the award has been won. It was another addition to the Badgers’ growing list of women’s basketball accolades this season, which also included point guard Melissa Tatti being named a First Team All-Canadian Wednesday night.

“Him being recognized means a lot to us, because we all believe he deserves it,” said senior forward Jessica Morris. “He’s incredible. He means so much to me, because he’s been the greatest coach I’ve had in my career.”

In just his second season at the helm of the Brock women’s team, Rao guided the Badgers to a 17-5 record, including their first OUA Critelli Cup title since 1983 and first appearance at the national championships since 2001-02.

The Badgers added nearly eight points per game to their team scoring (70.9 ppg), allowed almost five fewer points per game (61.0 ppg), and most importantly, managed to add six wins to their record in two fewer games.

Rao, who was named OUA Coach of the Year last week, had the Badgers consistently in the Top 10 national ranking conversation.

Assistant Coach Courtney McPherson, who played for the Badgers under Rao last season, said he takes the complexity out of the game of basketball.

“Instead of standing around and talking about a problem, he’ll make us play it out,” she said. “Why talk, ask questions and make things more complicated when you can just play basketball and figure it out on the court?”

McPherson said this approach strengthens players ability to problem solve on the fly when the Badgers aren’t in a position to call a timeout.

“Mike has had a tremendous influence on me,” she said. “He has helped me transition from a player to a coach and helped me find the line between coaches’ responsibilities and players’.

“I think as a coach, Mike has proven that hard work and effort really does pay off. From last year to this year, the word I’ve heard the most has been ‘effort.’”

For Samantha Keltos, Rao has played a significant role in helping her make the move to U SPORTS basketball from playing with an NCAA Division 1 school in the U.S.

“Coming back from the NCAA was a big change and Mike Rao made the transition a lot easier for me,” said Keltos. “He took me in and believed in me from our first meeting. He has probably given me so many chances and opportunities to be great that no other coach would’ve thought twice about doing.”

Keltos, a 6-foot-3 centre, said unlike Rao, a lot of coaches mistake her style of play.

“Being a tall and slender post player, coaches always thought that I needed to gain muscle mass to be able to play in the post,” she said. “Rao recognizes and fits how I play into our sets, which has been working for us all year. Melissa Tatti and I work really well with each other and he’s figured out new ways to expose other teams.”

Morris has always hoped for a good playoff run during her four years at Brock, so she’s thrilled with how the year has gone.

“We’ve had an amazing playoff run and pulled off some amazing comebacks,” said Morris. “Taking the final so handedly was incredible, so to be here at nationals with Mike as our coach is the cherry on top.”

The Badgers open the Final Eight tournament against the Calgary Dinos on Thursday, March 5 at TD Place in Ottawa. Tipoff is set for 3 p.m.

The Final Eight will be livestreamed on CBCSports.ca, CBC Gem and the CBC Sports app for iOS and Android devices. The games will also be broadcast at Brock University on screens in the Guernsey Market, Hungry Badger and Walker Sports Complex.