Everyone’s favourite column (cleverly penned by Public Services Librarian Rebecca Lazarenk) makes its triumphant return! Fine, one person’s okayest column is back. And we’re actually getting close now. Only several dozen sleeps until our 125th anniversary in 2020. Fair warning: #90-86 in our 125 Fun Fact Countdown may be our most shocking yet. Read on at your own risk.
Nov 23, 2019 8:00 AM By: Rebecca Lazarenko 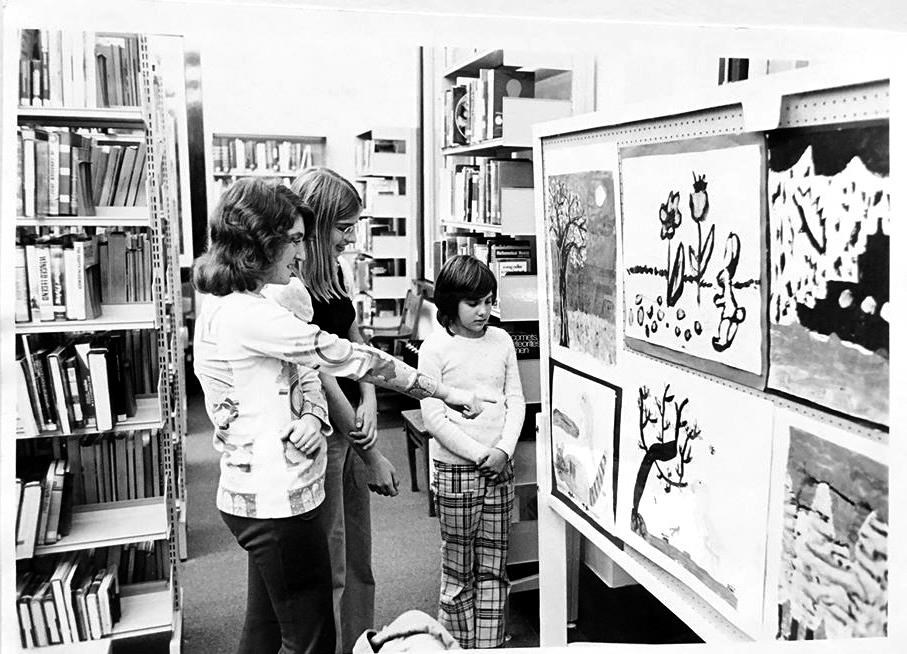 The above photo is a children’s art exhibit from 1974, organized under the direction of Miss Gertrude Syrotuik. According to our archives, these works were on display in the Adult Department in November, then moved to the Children’s Department in December. Nothing in the record on whether anyone noticed it was just the same thing in a slightly different location. So that secret was safe for a good 40 years.

In a Thorold News article from Thursday, Oct. 29, 1981 Ursula Grosse (a well-known columnist, TPL supporter, and longtime board member) introduced readers to her nickname for Thorold Public Library, 'Miss Libby.’  She would later clarify that Miss Libby was a doll in a rocking chair that represented the library to her, and would use the moniker in countless future articles – even penning a few “written by Miss Libby” herself.  The title never appeared to gain traction elsewhere in the community.  But we suppose that’s a good thing, since our current e-book Overdrive app is called Libby, has a young female mascot, and the confusion would prove irritating at best, insurmountable at worst.

Okay, here’s the real shocker.  Embedded right in the middle (that’s smart).  This whole 125 thing we’re on about?  Might be a complete farce.  What we mean to say is that according to an official TPL reference scrapbook, 1983 was the 125th anniversary.  Hmmm.  Now how could that be?  Well, at that time they were counting from the establishment of the paid membership Mechanics Institute, NOT the move to a free lending library for the community at-large.  Somewhere between 1983 and 1995 (our then “100th” celebration), someone decided to switch up the date of establishment to the latter. Who did it? Why? Where?  Well, probably here at the library.  But as for the other two questions, we’ve found no official explanation.

To clear up a common misconception, no one working in a library actually gets paid to read. Our book club titles are read outside of work and double as a good excuse to clean “tomorrow.” This myth likely originated from what we call the Starey McStarerson patron, who does not have a question of any kind, but simply enjoys the staring. At which point, the only polite and logical solution is to pick up whatever is around and put it in front of your face, slashing the awkwardness of the whole situation by at least half. In our case, this just so happens to be a book. If you worked in a grocery store, this might be a bushy top carrot or extra firm block of tofu.

Given that we're weeks away from 2020, we’re going to have to stop saying that 1999 was “not that long ago.” It will feel unnatural at first, but we’ll eventually come to terms with the fact that it was more than 20 years ago. That said, we're still very much in line with our core values from ‘back in the day.’ A Thorold News piece from February 13, 1999 discussed TPL's efforts to increase availability of banned titles from the last century through participation in the popular Freedom to Read Week.  In other words, eliminate censorship in favour of access. And that’s still our mandate. Fair warning, in case you planned to come in and get offended by Thomas’s Snowsuit (yep, that made the banned list).

St. Catharines man faces serious charges after Brant Township traffic stop
Aug 10, 2020 7:00 PM
Comments
We welcome your feedback and encourage you to share your thoughts. We ask that you be respectful of others and their points of view, refrain from personal attacks and stay on topic. To learn about our commenting policies and how we moderate, please read our Community Guidelines.