The return of the legendary Flying Fathers 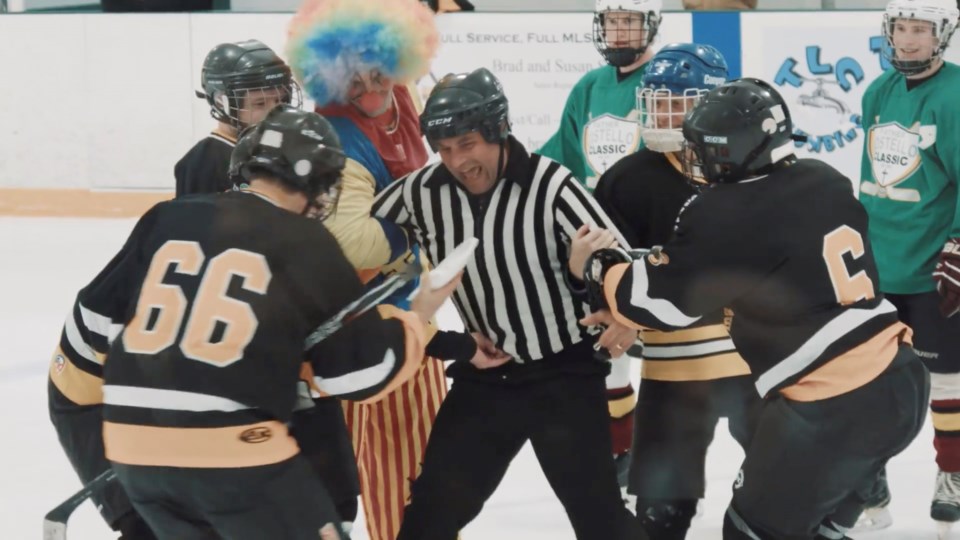 It's the old "pie in the face gag," for this sinning referee. Photo Knights of Columbus

An iconic Canadian hockey team will be making its way to Thorold this November. After a 10-year hiatus, the Flying Fathers Hockey Club has been resurrected and will face off against the Thorold Mounts Old-timers.

The Niagara Foundation for Catholic Education and Knights of Columbus councils are partnering to bring the Flying Fathers to Thorold and Niagara Falls.

A press release from the Foundation noted," For 45 years the Flying Fathers were known as the Harlem Globetrotters of Hockey, touring North America and Europe and raising millions of dollars for various charities while keeping fans laughing with as many outrageous stunts as they could get away with on the ice."

The team has not appeared since 2009 but earlier this year, "Father John Perdue, vocations director of Peterborough Diocese, decided to resurrect the team with a new group of priests who have met with tremendous success, playing to a sold-out delighted crowd on their first appearance," said the release.

The game will be a fundraiser and Mounts representative John Kenny noted, "Our team will include current members with some help from alumni."

The game in Thorold will take place on Wednesday, Nov. 20 at 7 p.m. Tickets will cost $10 each, with plans to have them available in area Catholic parishes, NCDSB schools, and other selected locations including Front Row Sports in the Gale Centre for the Niagara Falls game and at Front Row Sports in Thorold, and starting Oct. 1, at the Thorold Arena for the Thorold game. The game in Niagara Falls is scheduled for Nov. 19.

Besides the ticket revenue, "The Mounts will pay for the ice and make a donation afterward," Kenny told the Thorold News. "All money raised will stay in Thorold, with half going to the St. Vincent de Paul food bank and the rest to Thorold school breakfast clubs."

Kenny said the Mounts try to do a fundraiser every year.

"Last year, we raised $6,000 in a game to help bring a refugee family to Canada. We hope to exceed that amount this year," he said. "There will be prizes, a 50/50 draw, and puck toss. And, like last year, in between periods we plan to have a tyke or hockey school game."

The games will feature enjoyable hockey and all of the traditional Flying Fathers’ antics such as pies in the face, Sister Mary Shooter, the hockey playing nun, Smitty the Clown, the Flying Monk and much more in slaptstick surprises.

Armed robbers in St. Catharines assault elderly man and woman
Jan 22, 2020 7:53 PM
Comments
We welcome your feedback and encourage you to share your thoughts on this story. We ask that you be respectful of others and their points of view, refrain from personal attacks and stay on topic. To learn about our commenting policies and how we moderate, please read our Community Guidelines.