The hospitality worker hopes to pay bills, put a down payment on a house and help out family
Oct 16, 2020 1:46 PM By: ThoroldNews Staff 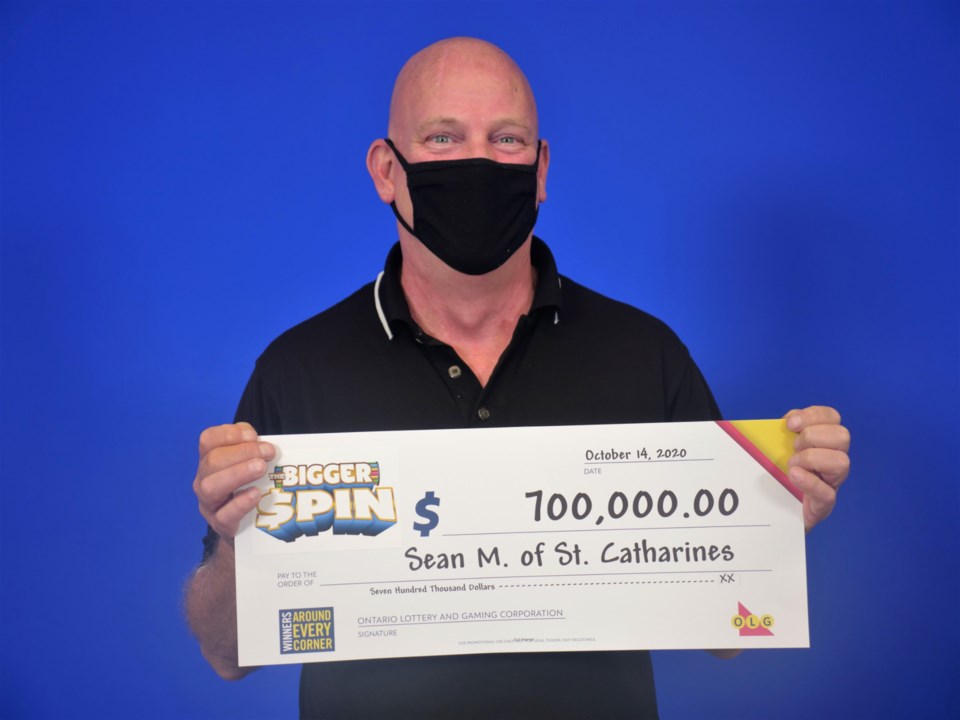 Sean, a 53-year-old hospitality worker, said he’s a regular lottery player. “I normally play Lotto 6/49, Lotto Max and the big/bigger spin instant game,” he shared while at the OLG Prize Centre in Toronto.

Sean said he wasn’t paying attention when he handed his ticket to the retailer to scan. “When I looked back and saw it landed on BIGGER SPIN, I was in disbelief!”

The win didn’t hit Sean until he went to the OLG Prize Centre to spin Bigger Spin Instant Wheel. “I walked into the room to spin the wheel and that’s when I said, okay it’s real – it’s really real!”

Plans for his win include paying bills, putting a down payment on a house and helping family. “This win allows me to help family – It’s all about family,” he smiled.

OLG is now accepting in-person prize claims by-appointment only for customers with prizes of $1,000 or more who wish to claim at the OLG Prize Centre. To best protect customers and staff, OLG has put in place appropriate health and safety protocols in accordance with guidelines from public health officials, which include physical distancing measures, the mandatory use of personal protective equipment (PPE) and the pre-screening of visitors before granting entry. Players should contact the OLG Support Centre at 1-800-387-0098 to discuss available prize claim options or to schedule an appointment.

Bigger Spin Instant game is an exciting $10 game that combines popular scratch play with prizes revealed in-store by an animated spinning wheel on the lottery terminal screen and potentially, an in-person spin on THE BIGGER SPIN Wheel at the OLG Prize Centre in Toronto.

2.    Watch – If the prize won is SPIN, visit any OLG retail location to validate the ticket and watch the animated wheel spin on the lottery terminal screen. Every “SPIN” is a guaranteed win! SPIN prizes range from $10 to $150,000 or a bigger spin.

3.    Spin – If the animated wheel stops on “bigger spin,” the prize won is an actual spin on the bigger spinn wheel at the OLG Prize Centre for a guaranteed prize of $500,000 to $1 million!

The winning ticket was purchased at Avondale on Saint Paul Street in St. Catharines.

NRPS have issued five provincial fines for violators of pandemic rules, says police chief
Oct 22, 2020 1:49 PM
Comments
We welcome your feedback and encourage you to share your thoughts. We ask that you be respectful of others and their points of view, refrain from personal attacks and stay on topic. To learn about our commenting policies and how we moderate, please read our Community Guidelines.