'Socks for Change' dives in feet first to end poverty

Sam Baio, a devoted local philanthropist and the founder/CEO of West49 and the Boathouse clothing stores, kick-started the Socks for Change program to help poverty-stricken people in Niagara
Jan 24, 2019 2:00 PM By: Cathy Pelletier 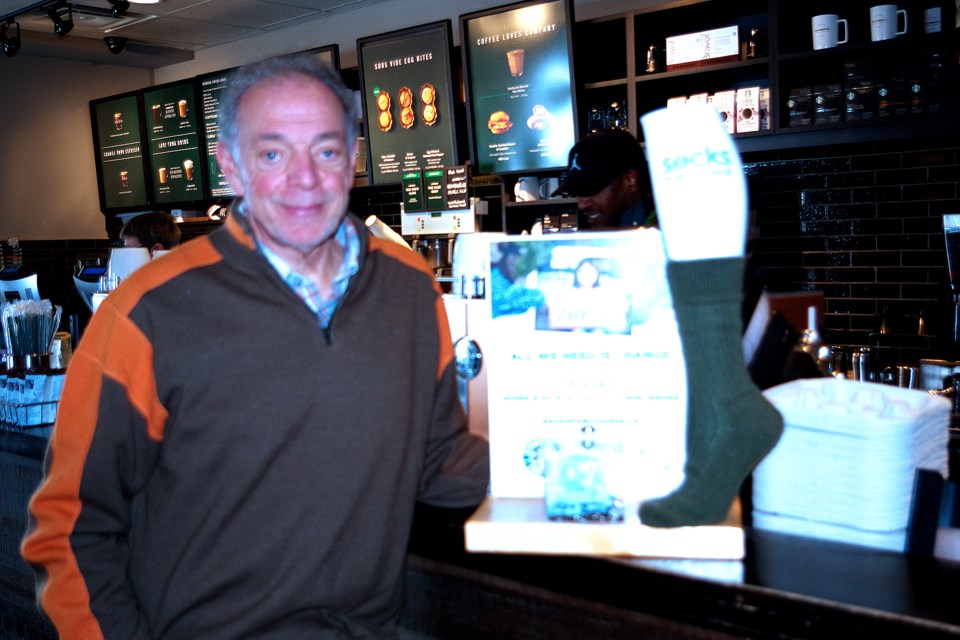 “I heard how shelters get clothing (donated) but never enough socks; they get a lot of cotton tube socks, and they’re just no good in the wintertime. And that just haunted me,” he told ThoroldNews.

A skier, Baio knows firsthand, “If your feet are cold, you’re miserable.”

Jumping in with both feet, the philanthropist and founder/CEO of West49 and the Boathouse clothing stores, kick-started the Socks for Change program.

“I hunted down a knitting mill in Etobicoke, called MacCormack Textiles,” he said. “They knit for the Canadian military and were kind enough to sell me 2,500 pair of socks” at a discount.

“I wasn’t even aware of the Niagara situation, how bad it was,” he stated.

Venditti told him “The socks only lasted 10 days, and never even made it to the shelters. I started with a lack of awareness, but I’m learning.”

There are more than 25 shelters in Niagara.

“Predominantly, our mandate is to put warm socks on people’s feet,” he said. “Principals are telling me there are kids coming to school with no socks. Working with the head of communications with the DSBN and Catholic School Board, and through teachers, I’m finding out the need.”

Socks for Change donated 3,500 pair of quality socks through back-to-school programs, and supported Thorold resident James Symons with his Toolbox campaign to help the homeless.

“We’re probably already in 25 shelters and homes, and this year, will also have socks in EMS and police cruisers in Niagara, and I’m starting to penetrate poorer high schools and elementary schools," explained Baio. "I think it has to evolve, become much more of a school-based charity. We’re going to primarily do schools, but we will have to do toques and mitts for kids, too.”

For the first two years, Baio financed the Socks for Change project entirely from his own pocket. This year, he sought out partners to help with fundraising, and the sheer logistics of continuing the program.

“I have a few volunteers that have been helping me pick them up at the warehouse and deliver socks to different locations.”

He also approached PenFinancial, “Because I knew they had a mandate on poverty.”

PenFinancial’s Director of brand development Jody Vizza “instantly fell in love with it and said, ‘We’d like to be title sponsor’.”

Baio set up sock displays and donation boxes in Boggio pharmacies, Starbucks cafes, and the Zehrs grocery on Geneva St., as well as other Niagara stores. Students from the St. Catharines Collegiate high school shop class helped make the displays.

“Every single penny of this fundraising goes to Niagara schools and shelters,” he said. “This isn’t a Christmas charity; it’s a winter charity, and it’s a long season. I’m really conscious about not competing with other charities. The great thing about this is it’s funded by nickels and dimes. Only $2 buys a pair of German wool socks.”

The socks come pre-washed so they won’t shrink in the dryer, and have “a bit of acrylic to strengthen the fabric; and it still has warmth when it’s wet.”

With roots in Sicily, Baio grew up in the fabric business in New York before moving to Canada in 1975.

“We knew what made people warm, so I was educated about that. You can’t live in cotton socks. I always said, I’ve got to put it back in the community. At West49, we’d help kids complete their wishes through the Make a Wish foundation, and I paid my staff to go build houses for Habitat for Humanity, so they could learn there’s more to life. We gave 15,000 coats to the Coats for Kids campaign.”

However, “This is not going to stop with socks,” he added. “I have dreams. I want to support low-cost housing in Niagara. There’s so much need for it and I would love to help down the road with clean temporary housing shelters for people getting their lives in order, as well as safe, warm places to sleep.”

After seeing someone sleeping on the floor of a St. Catharines ATM, Baio gave the man some socks.

“I have some young filmmakers we’re going to commission to make a film about poverty in Niagara. Awareness is really important. I’m learning every day about facilities I never heard of. People ask me, ‘Doesn’t it make you happy to know you’re helping?’ I was happier before I started, because you get angry when you see the amount of poverty here. It’s all about doing the best we can for Niagara. There’s so much need. People think it’s just in the south end, but it’s everywhere.”

Donations can be made online at www.socksforchange.ca.

Gift cards are also available, he said, “when you’re buying for people who have everything, and don’t know what to get them.”

Three local YMCA's set to open tomorrow, despite Niagara virus surge
Sep 29, 2020 2:45 PM
Comments
We welcome your feedback and encourage you to share your thoughts. We ask that you be respectful of others and their points of view, refrain from personal attacks and stay on topic. To learn about our commenting policies and how we moderate, please read our Community Guidelines.