Co-owners of A Yellow Flower Basket awarded for their inclusive hiring practices
Nov 4, 2019 11:30 AM By: Cathy Pelletier 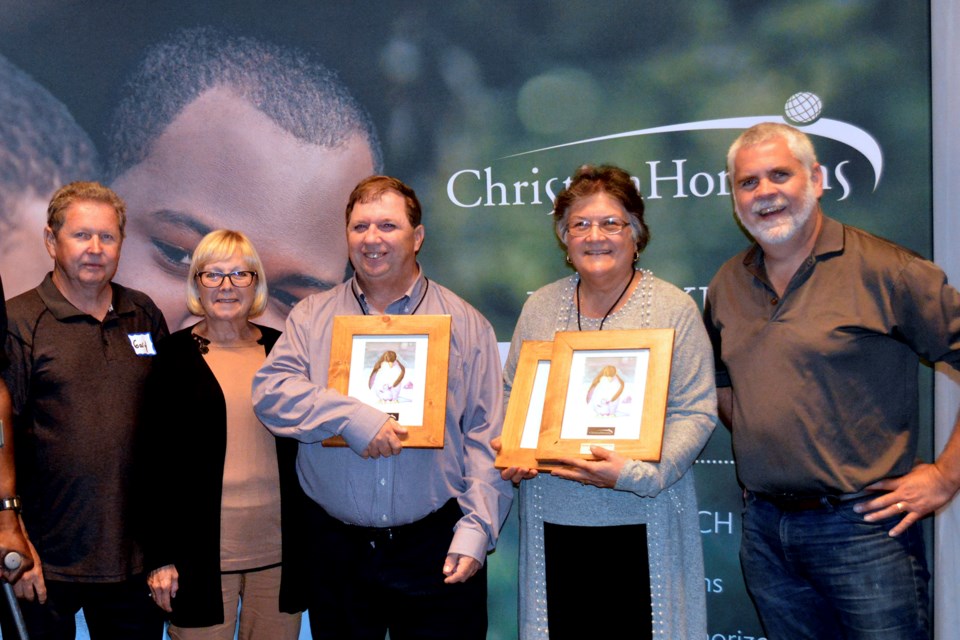 Every Friday, you’ll find Terry Isherwood washing the windows at A Yellow Flower Basket, and making the store sparkle.

A couple years ago, co-owners/sisters JoAnne Maiorano and Diana D’Intino were asked to consider hiring the 62-year-old Thorold resident to work in their Front Street flower shop.

“We became involved with Christian Horizons through Niagara Pathways, who approached us” about hiring Isherwood, one of the agency’s clients, D’Intino told Thorold News.

The sisters met Isherwood, said D'Intino, "and after an initial trial period were pleased to offer him a position with our store. Terry is a great employee. He is pleasant, focused and efficient.”

The sisters have been doubly happy with their decision. Not only does he keep their store spotless; they recently received an "Excellence in Action" award from Christian Horizons for hiring him.

D’Intino said they were “honoured,” and “pleasantly surprised by this. We didn't even know we were nominated until we received a letter congratulating us on being chosen for the award.”

Isherwood also won an award for his efforts. According to Kevin Isaac, Program Coordinator at Christian Horizons, “Terry has a long history of being a loyal and diligent employee,” having worked many years at an Arc Industries in St. Catharines, building pine furniture, then spending more than 10 years with Christian Horizons’ Niagara Pathways cleaning crew.

“Terry has always made life easier for staff and fellow crew members because of his great work ethic, dependability, and his great sense of humour.”

Isaac reported that "Terry found a job," working every Friday “for a great local small business, named ‘A Yellow Flower Basket.’ Owners Diana and JoAnne appreciate the well-cleaned floors and sanitized flower pails taken care of by Terry. Terry's excellent ability to clean the showroom windows was noticed by an adjacent tenant, and this landed Terry another job just down the street at a local Pizza Pizza. Terry, with his wonderful smile and warm personality, has been a great ambassador for both Niagara Pathways and Christian Horizons.”

Isaac nominated the two sisters for the award. His nomination letter follows:

“JoAnne and Diana are wonderful sisters who own and operate a small flower shop on the main street in Thorold. JoAnne and Diana were introduced to the Niagara Pathways Program in the fall of 2017. Pathways staff approached them about possible job opportunities for Terry Isherwood, a person supported by NP. JoAnne and Diana were excited by the opportunity to hire someone to do some of the work that they were finding too strenuous for themselves. They also recognized the last name of Terry (Isherwood) and made connections with Terry's family. Terry has been hired to work every Friday, cleaning and sterilizing flower pots, cleaning showroom windows and making the showroom floors shine. Terry overcame his initial doubts about working alone in the community and now looks forward every week to his work and paycheck.

“Natural spinoffs have occurred due to JoAnne and Diana's willingness to give Terry a chance. An employee of the local Pizza Pizza was so impressed with Terry's window cleaning at A Yellow Flower Basket that they hired Terry to clean the windows once per week. The work at Pizza Pizza was big enough work for two people...so a second Niagara Pathways participant, Liz, began helping Terry clean windows at Pizza Pizza. That second employee has moved on to another position and a third Niagara Pathways participant, Shane, is now working with Terry at Pizza Pizza.

“Niagara Pathways staff was also thankful for a recent email from Diana. They belong to the local Thorold BIA and wanted NP staff to know of job opportunities for the spring and summer in the downtown area. JoAnne, Diana and A Yellow Flower Basket have been a real blessing to both staff and participants. They have been great promoters of Christian Horizons and the Niagara Pathways program.”

One arrested in series of Niagara Falls storage unit break ins
Sep 25, 2020 7:57 PM
Comments
We welcome your feedback and encourage you to share your thoughts. We ask that you be respectful of others and their points of view, refrain from personal attacks and stay on topic. To learn about our commenting policies and how we moderate, please read our Community Guidelines.