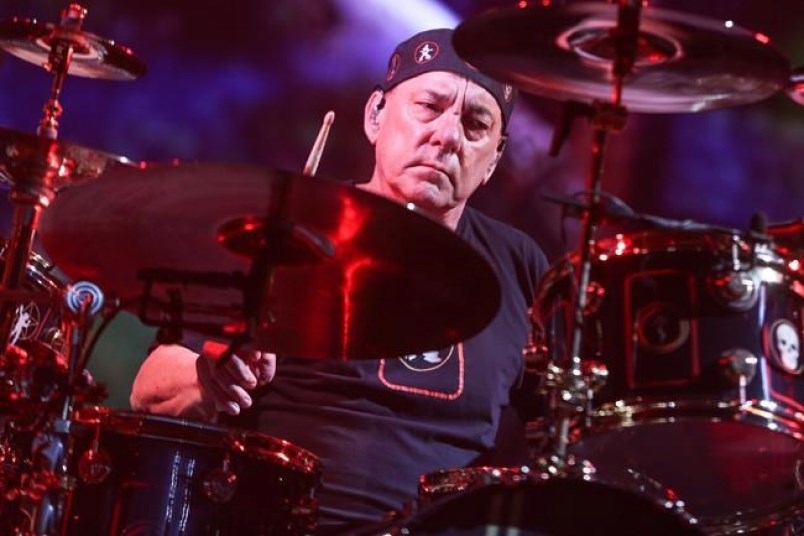 Neil Peart of Rush performs during the final show of the R40 Tour at The Forum on Saturday, Aug. 1, 2015, in Los Angeles. Peart, drummer of Canadian rock band Rush died at 67. (THE CANADIAN PRESS/Rich Fury/Invision/AP)

“Lakeside Park, Willows in the breeze

Lakeside Park, So many memories,

These poetic reminiscing placed Lakeside Park in Port Dalhousie, St. Catharines in the hearts and minds of millions of people around the world in 1975 when Rush’s third LP, “Caress of Steel” was released by these prog-rock giants.

The song also became a radio hit among a litany of others in the band’s remarkable legacy that spanned five decades. Rush ranks third for releasing 24 gold and 14 platinum albums behind the Beatles and Rolling Stones for most record sales by a rock band.

“Lakeside Park” like most of Rush’s lyrics were written by drummer and percussionist, Neil Peart, a native of St. Catharines, recalling his heartfelt youthful days of summer working in the midway there.

Peart’s passion for writing extended beyond composing lyrics as he authored a half a dozen books on his extensive travels on his motorcycle and bicycling to destinations across the globe in order to explore and heal from the many personal tragedies in his life.

His journeys are well documented and for those who want to know Peart – recommended reading.

Peart, tragically passed away in California last month at the age of 67, after three years of struggling with brain cancer.

According to Phil Cristi, Director of Community, Recreation and Culture Services with St. Catharines, the pavilion was a part of a major upgrade to the many features in the park several years ago, which included a bandshell, beach sun shelter, playground, washrooms and lighting to the tune of $2.4 million.

The newly renovated pavilion remains nameless, so there have been suggestions to name it after Peart, explained Cristi.

While he couldn’t give the exact dimensions of the pavilion, he described it as: “pretty large,” and the renovations “significant”.

The city has a virtual suggestion box on this link until March 9.

Participants can also make other suggestions and ideas on how to honour Peart on this link, which could include other locations where monuments should be placed at Lakeside Park or other areas, like an art centre, for example.

“We’ve had submissions for a statue, a drum set, those are the most popular ones off the top of my head,” said Cristi, also noting the city may be honouring Peart in other ways, as well.

Once all suggestions have been received, staff will review the names and present a shortlist of finalists to the public. This is also pending approval of the family and the remaining members of the Rush entity: guitarist, Alex Lifeson and bassist, Geddy Lee.

Preference will be given to names that reflect the area history, heritage and environment, states a report by the city.

A public meeting will also be held for others to weigh-in on the idea, which Cristi said is a part of the “democratic process” that fosters transparency.

Voting on the finalists is expected to take place in mid-to-late March, which will help council make its decision when the report is presented in April 2020.
Cristi expects many creative ideas to surface for Lakeside Park. Noting Peart’s international fan base and popularity around the globe, he realizes there is a possibility of receiving private funding for additional memorials and dedications to be made.

According to the city’s policy for prioritizing names, the hierarchal order is as follows:

Given that Peart is also a member of the Order of Canada, and he was inducted into the Rock and Roll Hall of Fame in 2013, chances are optimal his name will soon be emblazoned on Lakeside Park, where our memories of him will last forever.