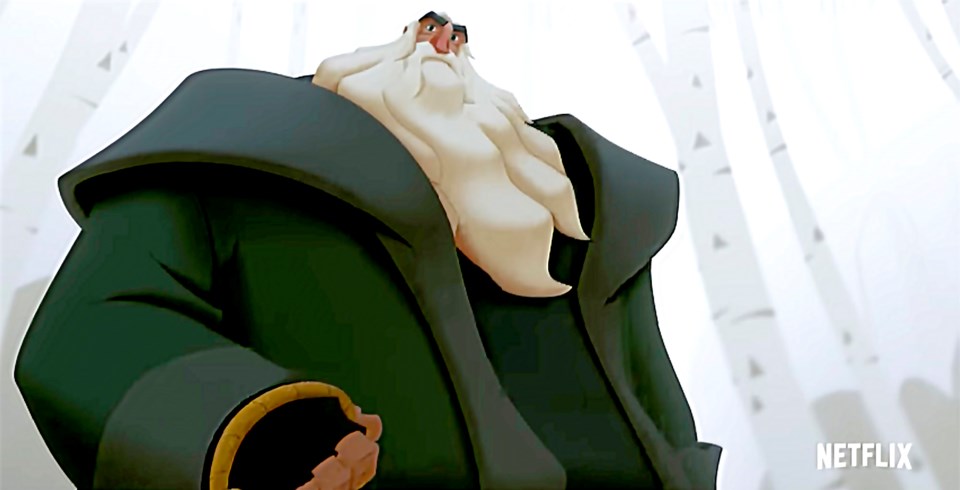 Who can recount learning about the Christmas movies they watched and growing up with, or watching brand new specials that give you a glimpse of nostalgia at the same time? With all the talk of this particular film, it's time I talk about the Netflix animated film, Klaus (2019).

The movie focuses on Jesper, played by Jason Schwartsman, who is a selfish, pampered brat and has no ambitions in life, due to his family being rich within the postal business. Determined to teach Jesper that hard work pays rather than mooching off a wealthy family, his father stations his son to an island above the Arctic Circle in a town known as Smeerensburg, with the proviso that if Jesper doesn’t post 6,000 letters within a year, he'll be cut off from the family. Facing feuding locals with a tradition of bitter conflict that lasts generations, Jesper finds himself at odds with his goal until a fateful encounter occurs: a reclusive man who lives in the woods, skilled in woodworking and his house filled with handmade toys, whose name just happens to be Klaus.

If that premise didn’t tip you off, this movie is another retelling of the origin of Santa Claus. But rather than being a retread of other popular Santa Claus origin stories, like Rankin Bass’s Santa Claus is Comin’ to Town (1970), this movie focuses instead on the creation of the character’s myth through accidental means by Jesper and his selfish goals. It's actually very refreshing to see as a narrative, since the actions of the characters is what makes the change within the town positive, intentional or not. There are some traditional elements of the Santa Claus lore, such as delivering toys, sleigh and reindeer, but here it doesn’t feel forced; it goes along smoothly within the film’s own story. Not to mention that Klaus’s character is a unique take on Santa as a reclusive woodsman. J.K. Simmons gives a wonderful performance of a man who's intimidating at first but slowly reveals a kind, gentle soul.

There are so many positives with this film it's hard to talk about them without giving away the entire story, though even this film has some flaws.There are moments when modernized songs come in to emphasize a comedic moment that don’t last long but can be a little distracting. My main issue is with the leaders of the opposing sides of Smeerensburg, who serve as the main antagonists of the film. The setup for the town makes sense as the audience would see how many of the residents would change, and yet the reason the leaders want the town to keep feuding is comical to the point of being absurd. To make a comparison to the previously mentioned Rankin Bass special, I’d say the villain of that movie probably inspired them; the grouchy Burgermeister Meisterburger, who wants to keep everyone as miserable as he is. But considering what this film is going for with its narrative, it does make sense that they would be that way; it just feels a little too forced for my taste.

On a technical level, Klaus is a film that attempts to bring back traditional 2D style animation, and as someone who grew up with this style of animation, it is MUCH appreciated because this film is beautiful! The style is unique, characters are expressive, and the colours are used masterfully to create the right mood when the specific scene demands it. This makes sense, since Klaus is directed by Sergio Pablos, a former animator at Walt Disney Studios who worked on some of their biggest animated films during Disney's Renaissance period in the 1990s, including Aladdin (1992), The Hunchback of Notre Dame (1996) and Tarzan (1999). Pablos had help from other former Disney animators, like the legendary James Baxter, who worked on other films, such as Beauty and the Beast (1991), as well the late Mary Lesher, who worked on other films like The Lion King (1994). Sadly, she passed away earlier this year due to cancer, and this film is dedicated to her in memory of her hard work and contribution.

It's a shame that Klaus was not released in theaters due to fear of competition from Disney, but thanks to Netflix, everyone can now see this wonderfully crafted movie, anywhere they go. I think it goes without saying that Klaus is already destined to be another holiday classic. In addition, this film helps demonstrate that traditional animation still can be an engaging experience compared to 3D animation. Klaus’s philosophy is something I hope can carry on in years to come, best exemplified with these words: “A true act of goodwill always sparks another.”

With the world feeling much more cynical, selfish, even self-destructive these days, it's always heartwarming to be reminded that people still believe in that philosophy. Like the myth itself, I hope that this film will last for future generations.

Good morning, Thorold!
Jan 29, 2020 6:00 AM
Comments
We welcome your feedback and encourage you to share your thoughts on this story. We ask that you be respectful of others and their points of view, refrain from personal attacks and stay on topic. To learn about our commenting policies and how we moderate, please read our Community Guidelines.