The initiative is to create a warm, welcoming environment for tourists and remind visitors of the town's health and safety protocols around masks, social distancing
Sep 8, 2020 6:00 PM By: Bryan Levesque 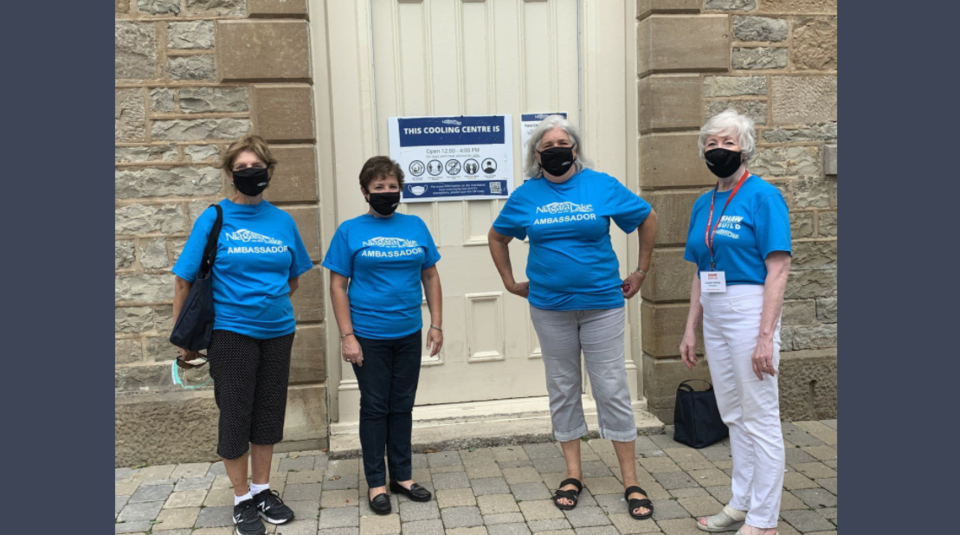 There have been a few more friendly faces around Niagara-on-the-Lake lately.

Two weeks into their new Ambassador Program pilot project, an initiative to create a warm, welcoming environment for tourists and remind visitors of the town’s health and safety protocols around masks and social distancing, the town has so far delivered safety with a smile.

The town has teamed up with the Shaw Guild, made up of 325 volunteers who support and promote the annual Shaw Festival, to deliver the program.

Beginning Aug. 29, volunteers in blue shirts have lined Queen Street as the program begins its run until Sept.13.

“The town approached us and said we would like to have an ambassador program, so we had the volunteers who were gung-ho to be doing something. We had the organization and structure to do it quickly. We were approached in early August, so we had about two weeks to put the program together.”

As an organization of volunteers who have been without their typical Shaw Festival duties, Harley said, the guild and its members were happy to assist and lend a friendly face as ambassadors to the town – work most of its volunteers are already comfortable with.

“The idea was the friendly face, someone to greet and welcome visitors to Niagara-on-the-Lake, and also ask them if they are familiar with the protocols when it comes to wearing masks and social distancing.”

In the first few weeks of the pilot, the program has seen 30 ambassadors participate across three shifts on Wednesdays, Fridays, Saturdays and Sundays.

During the orientation stages of the process, one of Harley’s main concerns was the impact weather could have on the program, largely made up of seniors and retirees volunteering during the afternoon hours. But so far, Harley says, the cooler weather has been a benefit.

One of the Shaw Guild members volunteering as an ambassador for the town is Vlad Haltigin, who joined the guild as a fairly new resident looking to give back to the town.

Haltigin said his experience with the program has been positive overall, with most visitors being friendly and respectful of health and safety protocols.

“We found that most people were either on Queen Street or in the parks. So we would walk around each area, and people were generally very friendly and very thankful there was a program like this.”

Although created in a COVID-19 environment, with the purpose of ensuring proper protocols, both Haltigin and Harley agree the benefits of the program could be expanded into a post-pandemic world and benefit the tourist town in the future.

Haltigin says that in his experience, visitors have been respectful of the rules and welcomed seeing a friendly face.

“We have had two or three positive comments, and people were very respectful about distance.

“I think it represents Niagara-on-the-Lake very well. It is a very positive community, and this just enhances it.”

Harley said that from her experience with the program, as well as a resident of Niagara-on-the-Lake, having something like the ambassador program could greatly benefit the town moving forward; the question comes down to how the program is delivered, and how it develops after the pilot stage.

“I think the idea is good; it is all about how to manage it. In theory, they have picked the guild for the pilot because we were sort of ready to do it. How you manage it on an ongoing basis is up to the town.”

One of the observations Harley has already seen in the first few weeks is that adaptability is key. She said while the program started out as a series of fixed routes volunteers would walk, the program quickly shifted to more flexible options.

After the program completes its pilot run on Sept. 13, Harley and the Shaw Guild will take their findings back to town councillors, where a decision will be made whether to continue the program and what that program may look like moving forward.