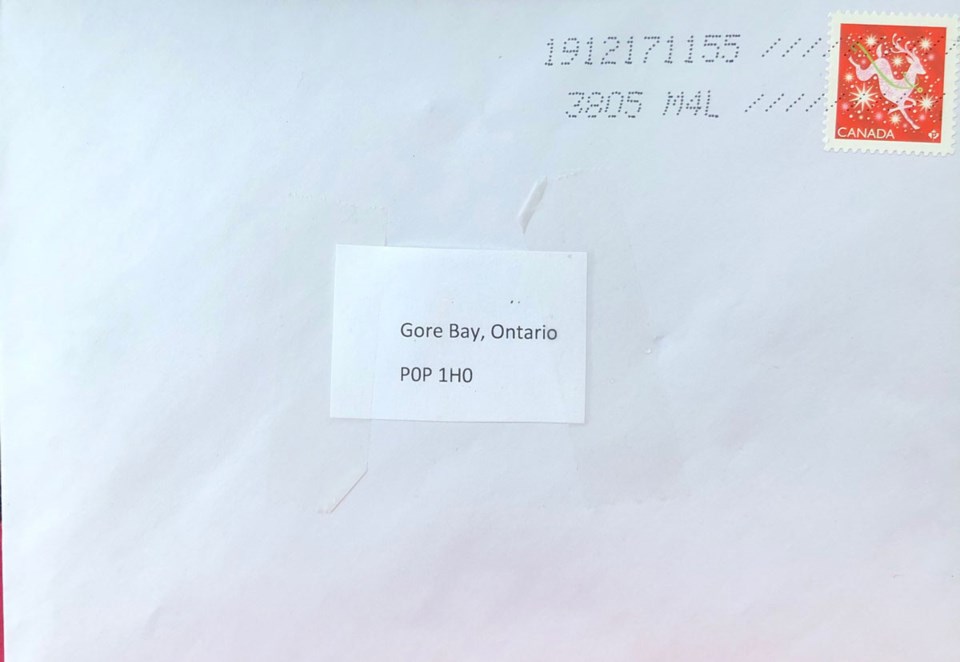 Upwards of 50 addressed envelopes like the one above appeared in mailboxes across Gore Bay. (Photo: Courtesy of The Manitoulin Expositor)

While 2020 is well underway, an investigation stemming from the holidays will reach the courts next month.

It was right before Christmas that Gore Bay artist Perry Patterson received mail.

The letter, sent in a plain white envelope with a typed label taped on, was posted from Toronto.

Inside was a Christmas card along with a typed note in a folder piece of paper, Patterson told the Manitoulin Expoisitor.

But what was inside shocked him.

The message on the note was a symphony of “vulgar words”, venomous, lewd messages and name-calling of both Patterson and his family.

The message allegedly also said that “Everyone in town hates you, why don’t you *expletive) die.

As it would turn out, he was not alone in receiving these nasty greetings.

“Whoever has done this has been meticulous in putting them together and obviously knows a lot of people in town. The messages are really, really nasty”, another recipient told the paper, adding that the messages made the community come together as opposed to turn on each other.

On Friday, OPP announced charges have been laid against 49-year old Tracie Thomas from Niagara Falls.

She is due to appear in Ontario court of Justice in Gore Bay in the middle of February, charged with 20 counts of mailing an obscene letter as well as criminal harassment and threatening conduct.

Some Sealtest milk recalled because it may contain sanitizer
Jan 25, 2020 8:59 AM

Good morning, Thorold!
Jan 25, 2020 6:00 AM
Comments
We welcome your feedback and encourage you to share your thoughts on this story. We ask that you be respectful of others and their points of view, refrain from personal attacks and stay on topic. To learn about our commenting policies and how we moderate, please read our Community Guidelines.