John Brown house determined to be a non-heritage site, can be demolished to make room for town houses 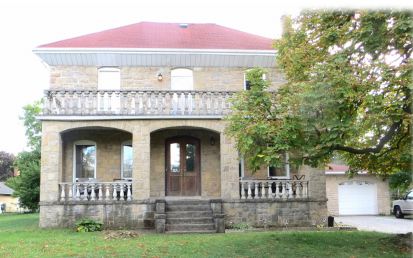 A legal battle over the historical value of a local stone building has come to an end after city council determined that the property will not end up on the list of historical buildings in Thorold.

The building on 205 St David's Road, commonly known as the 'John Brown House' sits on the site of a planned townhouse development and would need to be demolished in order for the plan to move ahead.

The house had been listed as a 'potential heritage property,' but an actual designation was never made, council heard.

Developer Anthony DiFruscia told council that he had been asked numerous years ago about a possible designation of the site, but had declined and thereafter not heard anything about it.

He gave it little thought until the matter came up to the surface again this summer when he was moving forward with his plans for the development.

"If I had any knowledge of the list or possible designation, I would have never purchased the property," DiFruscia told council about the land investment that he made with his late wife, intending to take up residence in one of the planned houses.

"This puts mine and my family's financial situation at risk."

Despite a report by local historian Sarah King Head to the Heritage Committee found that the house did have historical value and would fulfill the criteria for a heritage site, council chose to side with DiFruscia after agreeing that designating the property after the purchase would be an unfair move.

"To put this burden upon him this time and stop a possible development is totally unfair," stated coun. Jim Handley, who said he could never recount a historical designation of a property being imposed on the initiative by anyone other than the homeowner.

"I have never seen a situation like this," coun. Victoria Wilson said, adding that the timeline for the concerns over designation came up again, despite DiFruscia declining the designation the first time, and in the '11th hour' of the application process.

"It sounds fishy to me."

Councillors also noted that the report concluded that Brown never actually had lived in the house.

The decision is separate from the proposed development, which is dealt with in a separate process.

BEYOND LOCAL: Ways you can reduce your baby’s pain during medical procedures
Nov 28, 2020 9:25 AM

BEYOND LOCAL: How flaws emerge in modeling human genetic diseases in animals
Nov 27, 2020 8:55 PM
Comments
We welcome your feedback and encourage you to share your thoughts. We ask that you be respectful of others and their points of view, refrain from personal attacks and stay on topic. To learn about our commenting policies and how we moderate, please read our Community Guidelines.