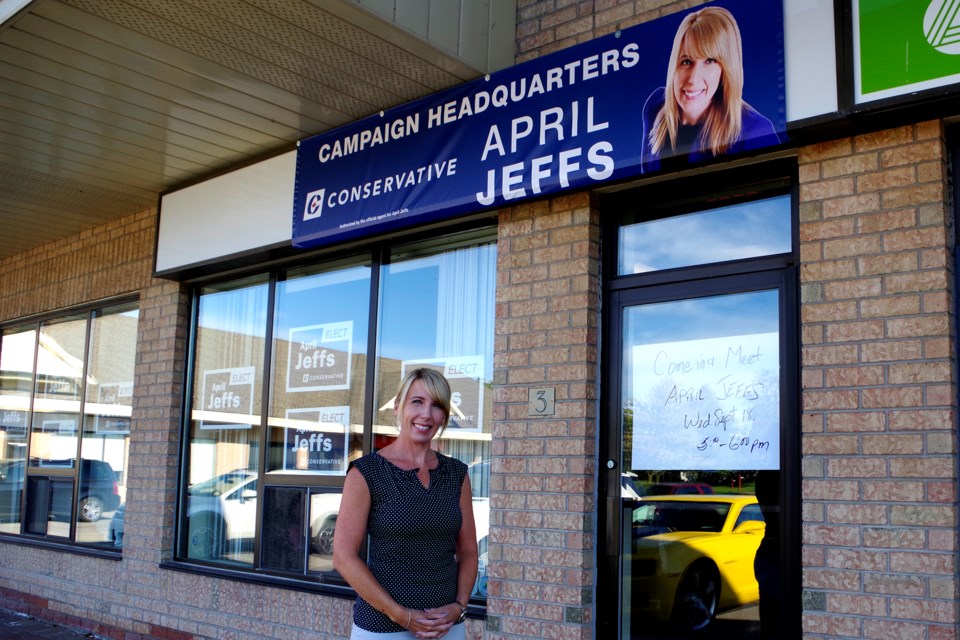 April Jeffs, Conservative candidate for the upcoming federal election, opened a Thorold campaign office this week, and invites residents to come meet her in the Schmon Parkway plaza, which can also be accessed from Merrittville Hwy.

A former mayor of Wainfleet for eight years, and mother of two sons, aged 16 and 19, Jeffs has operated a wedding and portrait photography business for the past 16 years.

“We had a goal this campaign to have an office in each municipality,” she told the Thorold News, “just to get to know members of the community.”

And although she believes “There’s that common thread” among Niagara municipalities, “I think every municipality is unique and has unique issues.”

While knocking on residents’ doors, “I’ve been hearing all kinds of issues at all different levels,” she said, many of which involve “affordability,” including “tax and gas increasing, and parking at the local level.”

She sees her role as “Just being cognizant of what issues affect people and pointing them in the right direction.”

On town council, Jeffs led the charge against allowing wind turbines in Wainfleet, a process she described as “painful at times, but it just makes you stronger as a leader, and I have that drive to fight.”

She’s “not a fan of amalgamation,” she said, referring to the looming possibility coming down from the provincial government.

“There’s a feeling that South Niagara tends to be ignored, and I want to bring that stronger voice for South Niagara.”

Homelessness and poverty, as well as mental health, the opioid crisis, and other health care issues, particularly with respect to seniors, and concerns about pensions and fixed incomes, are prominent.

“When you’re a senior and you want to scale down, it’s getting more and more difficult to do that with the movement from the GTA increasing the housing market,” she said, adding that she’s against the mortgage stress test that the Liberals put in place, calling it “a barricade to home ownership for younger people and single parents and self-employed people.”

Jeffs, who was a candidate for the provincial Conservatives, came in second place in the 2018 spring provincial election, with just over 18,000 votes, while NDP MPP Jeff Burch won the riding with 21,000 votes.

“Vance and I both have municipal experience,” she said, “and I have talked to so many people and I feel like I bring that local grassroots perspective. A lot of people will say, ‘That’s a provincial issue; that’s a federal issue,’ but I think they all go hand in hand.”

“The Conservatives are going to continue the health and social transfer payments and continue with the existing increase of three per cent. I’m getting asked about the Welland Hospital, which is so far promising to stay open, especially with the boon in population. That was something I fought for when I was mayor, and it’s important to all of us in the riding.”

With respect to infrastructure funding, she said, “It seems like the bulk goes to the north. There’s the sense that we could be receiving more and we’re in dire need of some modern replacement infrastructure, and those are some of the things I’ve been hearing from people.”

While canvassing with her team since January, she said, “There’s a lot of energy and a lot of support, and I feel like we’re firing on all cylinders. A lot of people are concerned about what’s going on in Ottawa, with the Ethics Commissioner’s report coming out," referring to the Trudeau's government involvment with the SNC- Lavalin corporation.

The federal election is scheduled for Oct. 21.

BEYOND LOCAL: The danger of overusing the word 'hero' when describing survivors of trauma
Feb 17, 2020 9:25 AM

Good morning, Thorold!
Feb 17, 2020 6:00 AM
Comments
We welcome your feedback and encourage you to share your thoughts on this story. We ask that you be respectful of others and their points of view, refrain from personal attacks and stay on topic. To learn about our commenting policies and how we moderate, please read our Community Guidelines.