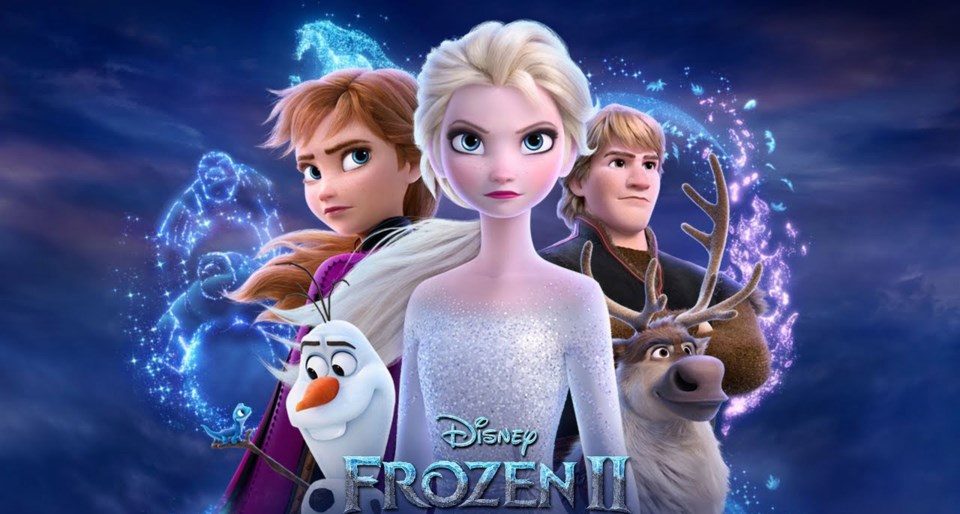 The following movie review was submitted to ThoroldNews by Ryan Walsh:

In 2013, nobody could have predicted that Disney would catch another lightning in a bottle with the release of Frozen. Very loosely based on the Hans Christian Anderson tale, The Snow Queen, Frozen quickly became such a cultural phenomenon with its memorable characters and catchy songs that it dethroned The Lion King (1994) as the highest grossing animated film of all time. Six years later, Disney has released a sequel that continues the journey of Anna and Elsa in Frozen 2.

The story takes place three years after the events of the original film, as Elsa hears a mysterious calling that makes her venture forth to find the source. Upon doing so, she learns of events that transpired in the past, hoping to find out how her ice powers came to be. Elsa’s relationship with her sister is put to the test as she constantly places herself in harm’s way to discover the mystery of her family’s past, which will determine the fate of Arendelle and its citizens.

This is Disney’s second attempt at animating a direct sequel to one of their previous works for theaters since last year’s Ralph Breaks the Internet (2018). Considering that their original films were huge successes years ago, like its predecessor, Frozen 2 suffers from a few issues that may make this hit-and-miss for some viewers.

On the positive side, Frozen 2 expands its own world and characters, consistently keeping the main focus on Elsa and Anna. In Elsa’s case, the sequel delves into more about the origin of her famous ice powers, which was barely examined in the first movie. Anna’s stake is learning more about her family and hoping to always remain with her sister.

The songs are enjoyable too, in their own way, especially with the fantastic vocals of Idina Menzel reprising her role as Elsa. And visually, this film is gorgeous! If you thought the first Frozen was beautiful with its breathtaking winter setting, the sequel takes it up a notch to make the experience a tantalizing treat for the eyes.

On the negative side, the biggest problem affecting this film is how convoluted the story is. Watching Frozen 2 on opening day, I was able to understand and follow what was going on, but thinking about it afterwards, I saw the story’s cracks starting to show. Every conflict or problem presented somehow ends without much tension. Even with another plot twist near the end of the film, it's predictable what the twist is and how it will be resolved. This felt more like a film that wanted to answer questions audiences had from the first film, but made up the plot as it went along, without much thought.

Another problem I had was that while the characters were consistent, most of them weren’t even really needed. Olaf, in particular, teeters between being lovable to obnoxious, depending who you ask, though I personally enjoy him, and most of my laughs came from him, especially during attempts to explain past events to newcomers. On the other hand, because he has more screen time and very little purpose in this film, I can see some people barely tolerating Olaf.

Kristoff suffered the most in this film. Not only does the B plot focusing on his relationship with Anna not mesh well with the main story, but it was actually done better more than 30 years ago in The Rescuers Down Under (1990), another Disney animated sequel that hit theaters. Considering that Kristoff’s back story was barely glanced at in the last film, you’d think he'd be offered his own shining moments, but sadly, that's not the case.

Upon reflection, Frozen 2 is a very mixed bag for me. I knew I was going to enjoy it more than Ralph Breaks the Internet since I have more issues with that movie than this one, though ultimately Frozen 2 suffers the exact same problem as the sequel. Overall, this film felt like it didn’t need to be made. At worst, this movie is like a direct to video sequel but with a bigger budget.

Personally, I’m in the camp of those who feel that even if a sequel is not as good as the one before it, it doesn’t ruin my experience with the original film. However, considering how Frozen is such an important brand for Disney right now, I honestly expected more. I did have fun, but it's a tough film to recommend. I can say that some people will enjoy it, flaws and all, but other viewers may be frustrated with its mediocrity. I’d say at least see it once and decide for yourself.