Enjoyable hockey, along with comedic antics, such as pies in the face; “Sister Mary Shooter,” the hockey-playing nun, and more slapstick surprises are in store when the Flying Fathers square off against the Thorold Mounts at the Frank Doherty Arena on Nov. 20.
0
Nov 7, 2019 10:21 AM By: ThoroldNews Staff 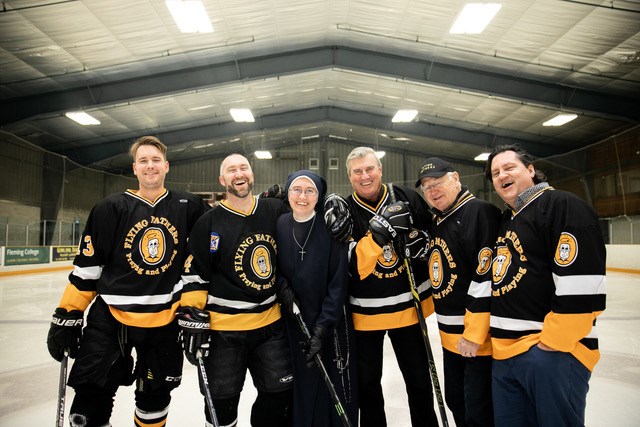 For 45 years, the Flying Fathers, AKA “the Harlem Globetrotters of hockey,” have toured North America and Europe, raising millions of dollars for various charities, all while keeping fans laughing with as many outrageous stunts as they can get away with on the ice.

On several occasions, the original Flying Fathers—including Father Les Costello, who before entering the seminary, was a member of the Toronto Maple Leafs—brought their hockey skills and comedy show to Niagara.

And now, they’re doing it again.

Following a game versus the Niagara Catholic All Stars staff and parish priests at the Gale Centre in Niagara Falls on Nov. 19, the Flying Fathers will square off against the Thorold Mounts at the Frank Doherty Arena on Nov. 20, 2019. The puck drops at 7 p.m. for both games.

Tickets cost $10 for each game, with proceeds supporting the Niagara Foundation Catholic Education, and other local charities.

Both games will feature enjoyable hockey, and all of the traditional antics, such as pies in the face; “Sister Mary Shooter,” the hockey-playing nun; Smitty the Clown; the Flying Monk, and more slapstick surprises.