Depression: back from the brink

After decades of hiding his heartbreaking struggles with depression, Darcy Patrick dug himself out of the depths and has written three books about the subject to help others
Jul 15, 2019 12:15 PM By: Cathy Pelletier 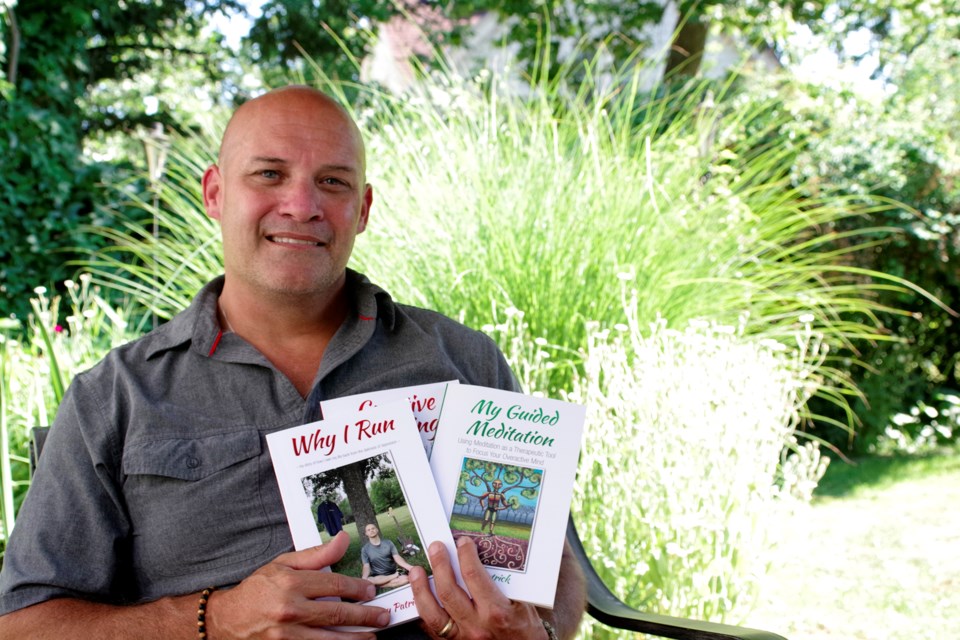 St. Catharines author Darcy Patrick will sign copies of all three of his books about how to combat depression at Coles at the Pen Center this Saturday. Bob Liddycoat / Thorold News

Six years ago, depression had such a stranglehold on Darcy Patrick that suicide seemed like his only option.

Thirty-eight years of struggling with crippling darkness, coupled with severe stress at work, are what “brought me to the breaking point,” he told the Thorold News.

Working at Long & McQuade Music Store, “I was eagerly taking every job I could at the time to show my worth and to hide the fact that I was struggling.”

Gripped by feelings of self-loathing, panic, doubt and worthlessness, he described his state as viewing life through “depression goggles,” when “you see nothing that’s actually truly there, and you feel that the world is against you and you can never succeed in life, and you just reach a point where the only solution is to leave. There’s no common sense. There is no proper thought. It all gets lost when depression takes control, and the more time you spend in that severely depressed state makes it worse, and you feel that that there’s no way out. And because you don’t have any options, committing suicide becomes the only option that you see.”

Luckily for him, his wife Sherri and son Dylan, he was able to dig himself out of the depths. Those dark feelings are far more fleeting now, lingering for mere moments or hours, as opposed to days, weeks, months, years, and decades.

“It’s hard to do and it takes practice, but after 38 years of struggling, and six years of therapy, I’ve been able to turn it around.”

Patrick never dreamed that in the process of healing his depression he’d become an author; his first book prompted by a bet.

“I started running as a bet that I couldn’t lose 80 pounds in six months, and when I started running, I was alone with my thoughts, which at the time, were toxic. So I cycled through those thoughts. I was also running from my emotions, so it’s symbolic,” he explained, that his first book was titled, Why I Run.

This was “the very first step for me,” he said, “where I had to acknowledge that I had these things going on inside me, and my physical and emotional reactions. People don’t know how to deal with negative emotions.  Anyone who is struggling with severe depression or anxiety needs to get it out.”

Depression and anxiety sufferers are “often brilliant,” he added, “but they’re either stuck in the past or worried about the future. They’re never in the present.”

The energy it takes for people to “add up the bad things in their lives over and over again could power a city. We give so much value to the bad things, and the greatest thing to fight depression is adding up the good. Give them sports, arts, music, to focus their overactive minds.”

Patrick said for him, writing worked wonders, “and it was completely new to me. When my therapist told me I should write a book, I laughed at her.”

Documenting his daily life gave him insight into what was triggering his downward spirals.

Immediately after the release of “my story of how I won my life back from the darkness of depression,” people came into the music store daily “to talk to me about their struggles, because they felt more comfortable with me” than a doctor or psychologist, he said. “It made them feel they weren’t alone, and my story resonated with them.”

“It just emphasizes the need that’s out there for proper mental health. The number of people coming to my signings and speaking openly about it rather than hiding it, is huge” in terms of reducing the stigma.

And while that’s encouraging, he said, “People aren’t educated when it comes to mental health; that’s the barrier we need to break. People fear it. They misunderstand it. When someone reaches the point of taking their own life, it’s not an option that popped into their head that day. People who have reached this stage all have people who love them, but this is a result of years of struggling, with no tools to fall back on. Mental illness has dominated their life for so long, they see nothing but darkness. It’s not something you snap out of, pull your boot straps up, or just let go. They don’t know how to let go the bad things in their lives. Even when something good does happen, they don’t see it. They have to re-wire their minds and that only happens when you dedicate time to creating.”

Enter his second book:  Creative Writing for the Mind, Body and Soul, which came about as a result of Patrick’s many public speaking engagements to promote his first book.

“I was hearing so many struggles and wanted to show people the same tools that I used but in a journal type format, but doing it their own way, and making it personal. That turned into the writing course that I teach. I just asked how I could help more people, and it’s taken off ridiculously well.”

Writing trained him to focus his overactive mind; “not allowing my mind to bounce from place because it was fully concentrating on the experience and the writing out of each detail, each word; each sentence. When you write, you connect your Mind, Body & Soul.”

Patrick now uses his book as a basis to teach a four-night course for the Family and Mental Health Support Network. He also teaches at the Community Addiction Services Niagara, the Southwestern Ontario Family Military Resource Centre and for the Niagara Falls Library, and is waiting to hear about teaching at the Toronto Public Library.

After 20 years, he said, “In September, I’ll be dropping down to part-time at the music store to further my career” in the mental health field.

“Eighty per cent of my classes I teach are women,” Patrick said. “Men are so guarded they think that showing emotion is not being a he-man, and they fear exposing themselves. The biggest boundary I feel is reaching males.”

Historically, children have been taught, “Get over it,” and “Boys don’t cry,” but “The cool thing is, we can talk to youth and totally change how we talk about mental health now. My parents had no idea how to deal with it but we can change the way we approach people with issues and not shy away from them. We can create a whole new world.”

Listening is key to helping, he said. “We all have the best intentions, but when someone wants to talk about their depression or anxiety, be the best friend you can be, and listen. If you automatically give advice, you are driving them away. Be non-judgmental, and sit with them, and show them love, and that they’re not alone.”

This builds a bond where the depressed person learns to trust and confide in you, over time.

As an added tool to combat depression, four years ago, he began meditation, and found it extremely helpful as well.

Patrick’s third book, My Guided Meditation, “Picks up where the second one left off, using meditation as a therapeutic tool to ease an overactive mind, specific meditations to cope with depression, with stress, for healing past traumas in life, and learning to focus.”

“When you practice the mindfulness and self-care,” depression has less power over you, he has found.

This Saturday, July 20, Patrick will be signing copies of all three books at Coles at the Pen Center in St. Catharines from noon to 4 p.m.

“I will be talking openly about depression and breaking the stigma behind it,” he said. “Join me and help change the way mental health is seen.”

More information is available at www.darcypatrick.com

Two facing drug trafficking charges after arrest in Welland
Jul 3, 2020 7:39 PM
Comments
We welcome your feedback and encourage you to share your thoughts. We ask that you be respectful of others and their points of view, refrain from personal attacks and stay on topic. To learn about our commenting policies and how we moderate, please read our Community Guidelines.