Competing on the world stage nothing new to Julia Longo 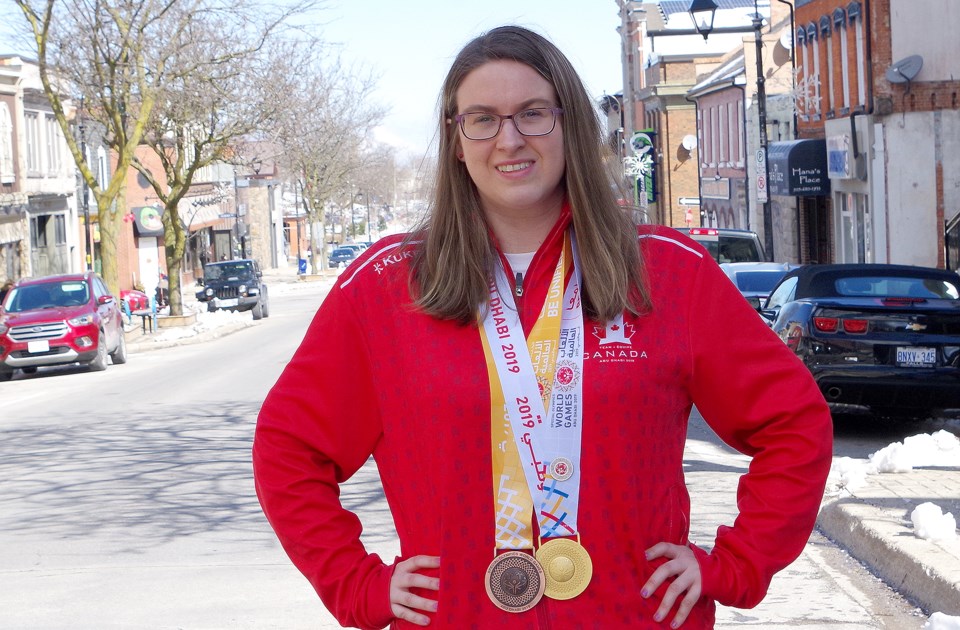 Some people thrive on competition and some people excel at it.

A  very select few are able to do both, and Thorold's Julia Longo is one of those rare athetes.

Julia told ThoroldNews, "I don’t like training but I enjoy competing. I feel good afterwards. I get a little nervous but I like it. I tend do to my best performances in front of crowds."

Dad Anthony added, "I'll vouch for that. Her best times are at the biggest competitions."

Longo just returned from the Abu Dhabi Special Olympics World Summer Games with two more medals for swimming. The veteran swimmer captured a gold for the 4X50 medley relay, and a bronze medal in the 100m individual medley. That brings her Olympic total number of medals to nine. She now has six gold medals, two silver and a bronze, captured at three Olympic appearances.

Julia competed in the Athens summer games in 2011 and again at the Los Angeles games in 2015.

"It's rare for any athlete to make it to three world games in a row," observed Anthony.

But that doesn't deter Julia from setting her sites on the next games. "I'm hoping to make it four in 2023 in Berlin, Germany."

In addition to the two medals this time, Julia finished fourth in two other races in which she was involved; an impressive performance, for sure.

But even more remarkable is that she was fighting an infection for two weeks during the trip.

"They have a team doctor which is really good because they were able to get her on antibiotics," explained the senior Longo.

During the interview Julia recounted, "I probably liked Los Angeles best; I swam a good 200m race. I finished sixth in the prelims, but came second in the finals."

Anthony and Julia, along with her mom Stacey and sister Amanda, enjoyed the three-week trip to Abu Dhabi.

They managed some sightseeing, drove dune buggies in the desert, and travelled to the 147th floor of Burj Khalifa, the tallest building in the world.

"It was a great experience; travelling to a different county is a once-in-a-liftime chance," said Julia. "Abu Dhabi is like Toronto on steroids," she said referring to its massive area. "But it's clean. It's a cultural thing to be so clean."

"When you get there it's not what you've read on the Internet. Sure it's culturally different but we saw no graffiti, no garbage, no homelessness. And I never felt so safe in my life," said Anthony. "They are a beautiful people."

Julia concurred, "They were very nice."

"The opening ceremony entertained 30,000 people in a huge cricket stadium, presided over by the Crown Prince of Dubai. It was a show you wouldn’t believe," said Anthony.

They added that the pool facility was a $250 million build and was "Just incredible."

Julia said this was her biggest competition and Anthony added, "The facilities over there were the best we've seen."

Julia trains at the Kiwanis pool in St. Catharines, and with her sights set on the next Olympics, she took two weeks off upon her return but is already back in the water to train.

Anthony explained, "By the third games it's harder to get up for it but she's been able to do it. She has a regional meet at the end of April to start all over again. She has to qualify regionally, nationally and provincially all over again to get to the worlds. Nobody hands her a ticket to get on that plane."

The Canadian swim team included 24 athletes from across the country but the final crew is not selected to represent a province or region; they must be the best in the country.

Julia has a history of competition and success. She began 17 years ago and swam OFSAA for the Denis Morris team.

"She might be the most decorated OFSAA athlete from Denis Morris," Anthony speculated.

In addition to training, Julia works full-time at the YMCA in St. Catharines as a lifeguard and swimming instructor. She really enjoys her job and thinks she may want to coach after she retires from Olympic swimming.

Anthony said the support from the community has been great, "We've had a lot more people reach out to us than ever before."

"I am very thankful for all the support from the community," added Julia.

Community Care launches online 50/50 raffle
May 31, 2020 8:24 PM
Comments
We welcome your feedback and encourage you to share your thoughts. We ask that you be respectful of others and their points of view, refrain from personal attacks and stay on topic. To learn about our commenting policies and how we moderate, please read our Community Guidelines.