COLUMN: Glad to be back?

Cathy Pelletier: We never thought we’d be posing with rolls of toilet paper, but things have changed since January
Mar 24, 2020 1:28 PM By: Cathy Pelletier 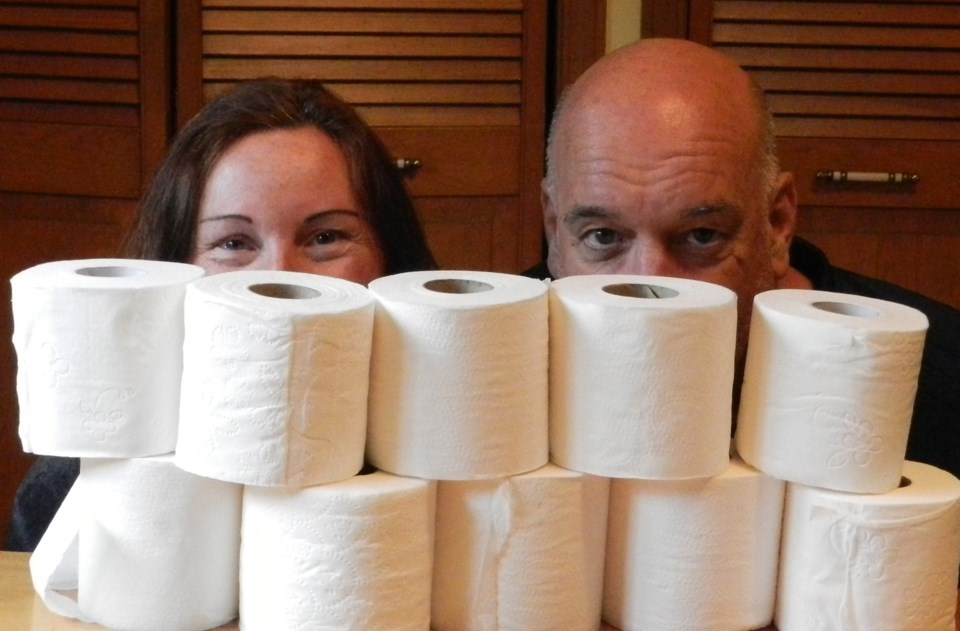 It’s a surreal scene, standing what we deem to be a safe distance apart and pawning off our potatoes and perishables on the U.S. citizens who will stay in our seniors' village a bit longer. Though we’d originally planned to return home April 7, we joined the hordes of Canadians who decided to flee Florida last week.

On our front balcony, I hold out a bag of brussel sprouts for our one neighbour; eggs and onions to another.

Wishing each other safe journeys home, we bid a final fond farewell to our friends from our car by waving solemnly, foregoing the traditional hugging.

We place all our frozen meat—including a pack of bacon given to us by a fellow Canadian who’d left earlier—on ice in our brand new cooler, bag up six or seven rolls of toilet paper, and head north.

Having cancelled my flight home, I brace myself for certain death and buckle up with Bob, self-isolating into the back seat, terrorized at the thought of being on the road for two long days. The last time I was in a back seat for a two-day road trip, I didn’t have car phobia, and was perched happily between my brother and sister—all seatbelt-less, about 50 years ago.

Now I’m like those horses they put blinders on during parades. If they can’t see the crowds, they’re not skittish, and if I can’t see the traffic, I won’t hurl (at least, in theory).

The world’s worst car passenger, I’m 10 times more terrified of dying in a car crash than I am of Coronavirus, but I’ve vowed not to be a nervous wreck and make Bob want to file for divorce before we reach Jacksonville.

With our trunk crammed so full of crap it barely closes, we hit the road, joining a Canadian caravan; spying hundreds of Quebecers fleeing Florida on day one.

At rest stops, we run in to restrooms only, dousing ourselves with sanitizer and trading tales of cutting our trips short with fellow countrymen—from a distance.

From time to time, we look for toilet paper, but everywhere, store shelves are empty.

After 10 or so hours, we pull in to a hotel in Statesville, North Carolina, but neither of us sleep much, so after being handed a bagged to-go breakfast by a gloved lady in front of the closed hotel dining room, we hit the road around 6:30 a.m., heading into the early morning mist of the scenic mountains.

A sign in the hotel parking lot blazes: “THANK YOU. STAY SAFE.”

Other signs along the highway blink dire warnings:  “STOP THE SPREAD. SAVE LIVES. STAY HOME.”

John Denver’s Take Me Home, Country Roads plays incessantly in my head as we wind our way through the idyllic Virginia countryside. The constant hairpin curves and twisting turns in West Virginia are stunning but make my stomach lurch, so I pop a Dramamine and move up to the shotgun seat, as Bob gives me a dubious glance.

It seems impossible to me that all these people—whose backyards are majestic mountains—could be worried about being wiped out by simply touching their faces.

On day two, we pass hundreds of Ontarians heading north. I’m sure none of us in this sizable Canadian convoy imagined we’d return under such dire circumstances when we set out in early winter: that the entire world would shut down; that a cough or sneeze from a stranger could kill us; that toilet paper would become the world’s most valuable commodity.

We avoid the fast food joints who are operating only with drive-throughs, all the way until we’re near the border, where we wolf down a Mcsomething or other, just to have something hot. I never dreamed there’d come a day when that would be such a treat.

Once we hit the cold climate, Bob takes off his shorts—right in the parking lot—changing into jeans.

“Desperate times call for desperate measures,” he tells me, “so I dropped my drawers.”

At long last, we happily cross the border into Canada, courtesy of our Nexus cards.

Texting and emailing all our family and friends, they’ve all offered to get us groceries, but we ask Bob’s brother, Gord, who lives two doors down, to get us bare bones supplies to last us through the two weeks.

“Let us know when Bob runs out of bologna,” texts my sister, LouAnne.

Feeling a physical ache at not being able to hug my fam and friends—who we haven’t seen since Christmas—we hunker in, pretending a jar of beets is dessert, and settle into the new world order, where video chats replace visits, and everyone’s afraid.

“Happy you’re back safe,” everyone texts. Ironically, we were probably safer in Florida, where incidence is lower per capita than Ontario.

Opening the bathroom vanity, I discover we have 12 rolls of toilet paper.

Port Colborne man faces more charges in sexual assault investigation
Aug 14, 2020 3:22 PM
Comments
We welcome your feedback and encourage you to share your thoughts. We ask that you be respectful of others and their points of view, refrain from personal attacks and stay on topic. To learn about our commenting policies and how we moderate, please read our Community Guidelines.