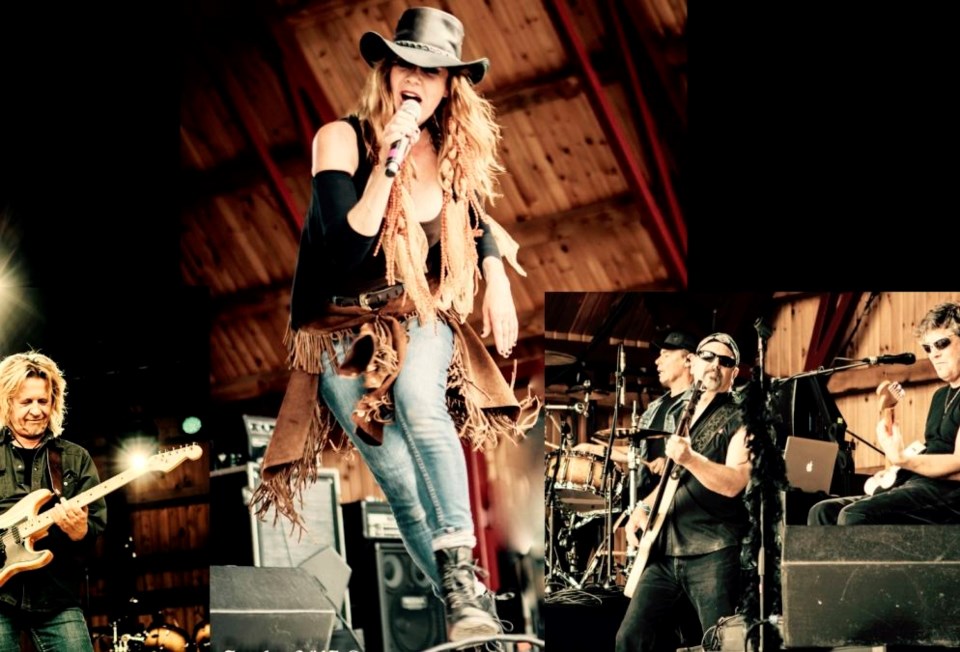 ‘Hurricane Jane’ Sowerby and her songwriting/life partner met a musician with a “particularly bad energy” while holding auditions for their band.

And thus, One Ugly Cowboy was born.

Described by manager Cam Butler as “a high-energy kick-ass country-rock band” that “puts people on their feet every time they play, and always gets standing ovations throughout their show,” the Toronto band will bring its gritty country and “in-your-face-rock” blend to the Seneca Queen Theatre this Valentine’s Day.

Guitarist Richard Zwic was bandleader/principal songwriter for Juno winner Lydia Taylor, and has opened the show for headliners Bryan Adams, Steppenwolf, and Nazareth, among others.

The couple has been writing songs together for years but their independent careers took precedent. Sowerby is an award-winning actor with more than 100 film/TV credits and has appeared in Murdoch Mysteries, Degrassi, Little Mosque on the Prairie, Sue Thomas, F. B. Eye, Dark Angel, Da Vinci’s Inquest, and numerous other TV shows and movies.

“I have been passionate about music and acting since I was a kid,” she told the Thorold News, “and over the years the focus went from acting to music. I still have an acting agent in Vancouver but with the formation of OUC, I’ve put 100 per cent of my focus on our music.”

While she and Zwic—a —were sitting in fellow Toronto native their home recording studio in 2014, they decided to get their “babies” (tunes) off the shelf and hunt for players to complete One Ugly Cowboy.

OUC soulfully blends upbeat, sometimes funny, with heartfelt tunes. According to Sowerby, “Get Yer Ugly On is the title of our debut EP (released 2015). It's a positive spin on the word 'ugly' in that the phrase is about taking a chance on your dreams.”

Lyrics from the song include: Self-doubt is a hangman’s knot; Ugly stuff – shake it off.

“Richard and I write independently as well as collaborate together,” said Sowerby. “Both of us write music and lyrics. Richard is also the producer and arranger of all our recordings. We’ve never given up belief in our tunes, or ever stopped writing, even when sometimes it seemed impossible to find an outlet to share our music. Over the years I've passionately pursued my dreams from Los Angeles to Vancouver to Toronto to Nashville to New York City and there ain't one moment I would ever change because that journey has defined who I am. I'm a fighter driven by that ‘fire in my belly’ that won’t go out. As a musician and an actor I’ve had my share of rejection—big time—but the flame’s never dwindled. And despite some ‘hard knocks,’ we’ve never given up, and never will. And at the end of the journey, it’s that kind of tenacity that (for me) makes a life full.”

Lyrics from One Lucky Break from Lucky sum it up: When the dust finally settles, and I look back on my life, if I didn’t bet the right horse, at least I rolled the dice.

“I can honestly say that I’m having the time of my life and that One Ugly Cowboy is the best and most satisfying band I’ve ever fronted,” she added. “The guys are amazing and with this band there’s a freedom in me to express that deep part of my heart and soul that I used to draw on as an actor but now bring to every OUC show.”

They’ll perform songs from their new album coming out this month, Ride with the Wind, and also from their debut EP on Feb. 14.

She describes Love Me Harder, as a song for “anyone who’s ever loved someone who can’t love you back,” and their new single, Trading in My Cowboy (for a pair of cowboy boots) as an “empowering song goin’ out to anyone who’s ever had a cheatin’ cowboy.”

They’ll balance some of their funnier songs, like: Fat ‘N’ Drunk, Ain’t Looking for Love (Just Buy Me a Drink), and I Aint’ Drinkin’ More (I’m just drinkin’ faster), with the heartfelt, I’m Sorry I Couldn’t Love You, “our version of Hallelujah.”

“The show will be geared to couples since it’s on Valentine’s Day,” she added. “It’ll be a country/rock night full of hurtin’, cheatin’ longin’ songs inspired by love. We’ll also be including some ‘love-infused’ covers that we’ve put our OUC country/rock spin on, such as Shallow, It’s Raining Men, and Hallelujah.”