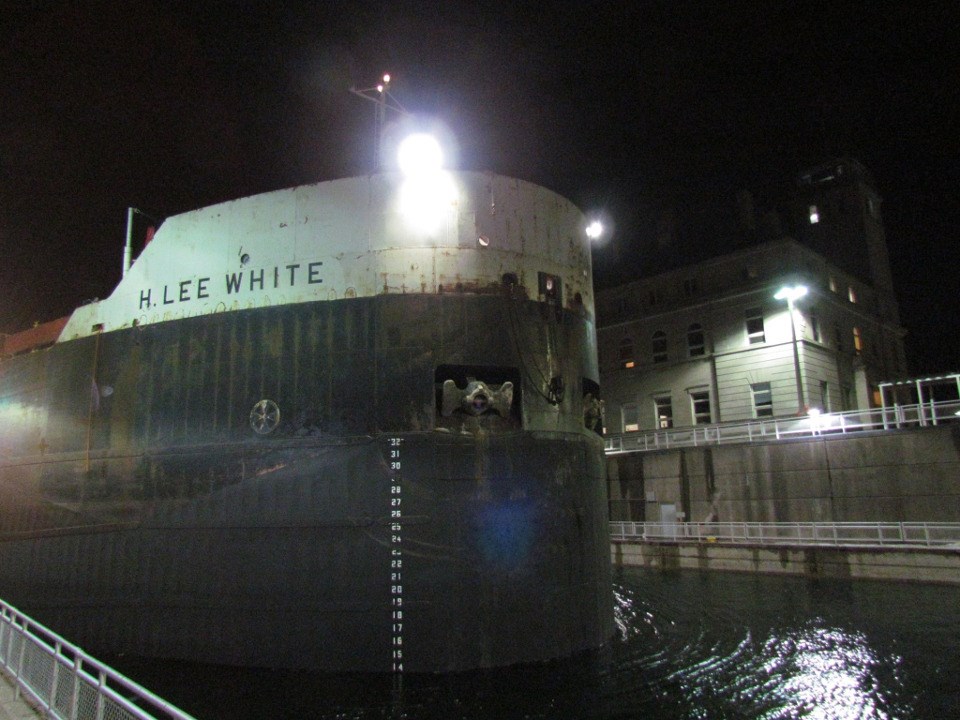 The H. Lee White was the first ship of the 2020 shipping season to transit the Soo Locks in the early hours of March 25. (US Army Corps of Engineers Facebook photo)

Tim Heney is preparing for an opening to the Great Lakes shipping season like no other.

“It’s not a normal season but we hope it goes well,” said the CEO of the Thunder Bay Port Authority.

The spread of COVID-19 has the entire Great Lakes and international shipping community sailing into uncharted waters with regards to crew safety and the state of the economy.

But Heney expects an otherwise smooth flow of Western Canadian grain through the Lake Superior port to start the 2020 season.

Shipping on the upper lakes has come alive with the opening of the Soo Locks in Sault Ste. Marie during the early hours of March 25. The locks had been shut down for a 10-week winter maintenance break.

The Welland Canal is also open to navigation.

Heney was expecting the first vessel to arrive in Thunder Bay by late March 26 or March 27, but was unaware of its identity based on a number of ships expected to get underway this week.

A glance at Marine AIS, the global ship tracking website, on the morning of March 25 indicated the 225-metre Algoma Sault had left its winter berth in Port Colborne and was making its way north on lower Lake Huron with Thunder Bay tagged as its destination.

The port authority’s traditional top hat ceremony, awarded to the captain of the first ship entering harbour, has been cancelled.

The annual general meeting and season-opening luncheon has been postponed.

Three ships, owned by Canada Steamship Lines, wintered in Thunder Bay and were loading grain on March 25 in preparation for departure within a day.

Out west, Heney said there remains a huge backlog of grain, stemming from the rail blockades earlier this year – “seems like a distant memory now.”

At the British Columbia ports of Vancouver and Prince Rupert, anchorages are chocked full of ships waiting to load cargo.

Heney suspects that could bode well for Thunder Bay as shippers and freight forwarders could begin making arrangements to send grain traffic east.

“That could be switched back this way. It’s going to be jammed up there for some time.”

Despite the delays, Heney isn’t anticipating a slow start to the season, based on the lineup of ships expected in port and the residual grain stored in Thunder Bay elevators from last fall’s harvest.

Last year, the port boasted one of its best seasons for volume in five years.

Grain made up 8 million tonnes of the overall 9.3 million tonnes shipped through Thunder Bay. The port authority reports a large winter carryover from last year’s harvest.

“If everything goes well, I think grain will start off fairly strong," Heney said.

Adhering to COVID-19 health and safety protocols of proper distancing between ships’ crews, stevedores, and elevator employees shouldn’t be a problem, he said, since work stations are usually spread out and cargo handling is mechanized.

He fully expects shipping companies are confining crews to stay on the vessel when in port.

“It’ll be interesting to watch the interface with the ocean ships. The trick will be if there are (COVID-19) cases on an ocean ship. What are the protocols?”

The port’s first saltwater vessel is tentatively scheduled to arrive in early April with a load of steel from Antwerp, heading for Western Canada.

The Montréal-Lake Ontario section of the Seaway opens April 1.

Heney was less optimistic about the upcoming 2020 schedule of inbound project cargoes of steel, rails and wind turbine components coming from Europe.

After attending a freight forwarders and supply chain conference in Calgary, Heney said many shippers are deferring cargoes to 2021.

“The economy’s in a bit of tailspin so nobody is committing to very much.”

One bit of good news for the port authority is that contractors were working toward completion of a new warehouse at Keefer Terminal on the city’s waterfront.

The 50,000-square-foot heated building is expected to be finished by June.