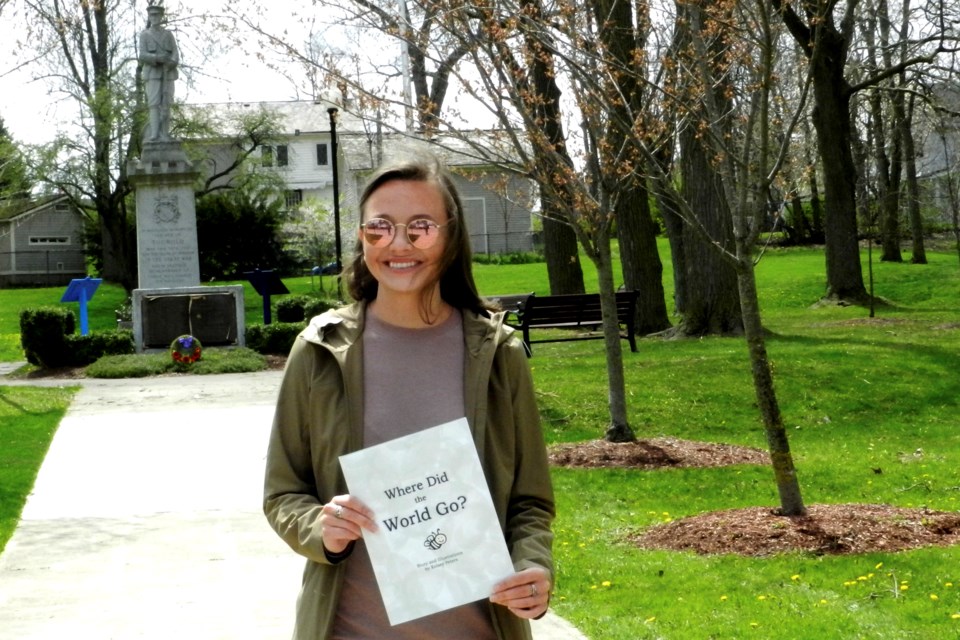 Had she not been forced to return to Niagara due to the pandemic, Kelsey Peters would be working side by side with her fellow health care workers in England right now, helping clear Covid-19 patients with ventilators.

“All my physiotherapists' friends do a lot of chest clearing in England,” said the Thorold native, who recently completed a Masters program in physiotherapy in the UK and was offered a job at West Midlands Hospital.

Feeling compelled to help in some way from her parents’ St. Catharines home, Peters was inspired to write a poem about the pandemic, to help children understand the current state of the world.

After reading it to her parents, Rob and Theresa, “They got emotional,” she told the Thorold News.

She also received favourable responses from her sister Carli and brother Alex.

The next thing she knew, she was “figuring out how to do Adobe” Illustrator, and within a week, she’d created a book, entitled, “Where Did the World Go?”

Peters, who grew up on Pine Street and attended Holy Rosary and St. Charles schools until her family moved to Oakville when she was eight, dedicated the book to her grandfather, Tommy Capone.

“He was my one of my best buddies,” she said, and because he was a World War II vet, she brought a copy of her book to the Thorold cenotaph, which she visits frequently in her grandfather’s memory.

Written through the eyes of a young girl named Rosie, the book is “really positive” and based on her own family. Friends of the Peters family will recognize Riggins, their Golden Doodle dog.

An excerpt from the book:

No dogs seemed to bark.

Not a single child laughing

Could be heard at the nearby park.

Where did the world go?

It’s been so long since I’ve seen anyone

Not only has she received heartwarming feedback and thanks for her uplifting book, but as an added bonus, Peters has also raised $550 for Food Banks Canada and Food4Kids.

“I’ve been getting really lovely messages from people who are using it to read to their elderly parents; some who have dementia” and are getting “frustrated being indoors,” she said, adding, “Food4Kids messaged me that 40 children will be fed this week” from the book’s sales so far.

All proceeds will be donated to charity.

Peters decided to help the food banks after reading a post from musical group The Arkells, that “For anything artistic you’re working on, Food Banks Canada will donate $100 per entry,” she said. “Food banks are such an important resource when everyone’s laid off. Being able to donate the money has been wonderful,” Peters added, “but the number of people who have sent messages saying, ‘That made me cry,’ or ‘My granddaughter understands what’s going on now’ … it’s made a crummy time much more palatable.”

Where Did the World Go? is available from Amazon online.

Alternatively, anyone wanting a copy of the book can contact the author via email at kelseyrosepeters@gmail.com