Fostering fur babies all in a day's work for the Gilbys

This is the first in a series of stories about local volunteers and other 'Helpers'
Jan 20, 2020 12:30 PM By: Cathy Pelletier 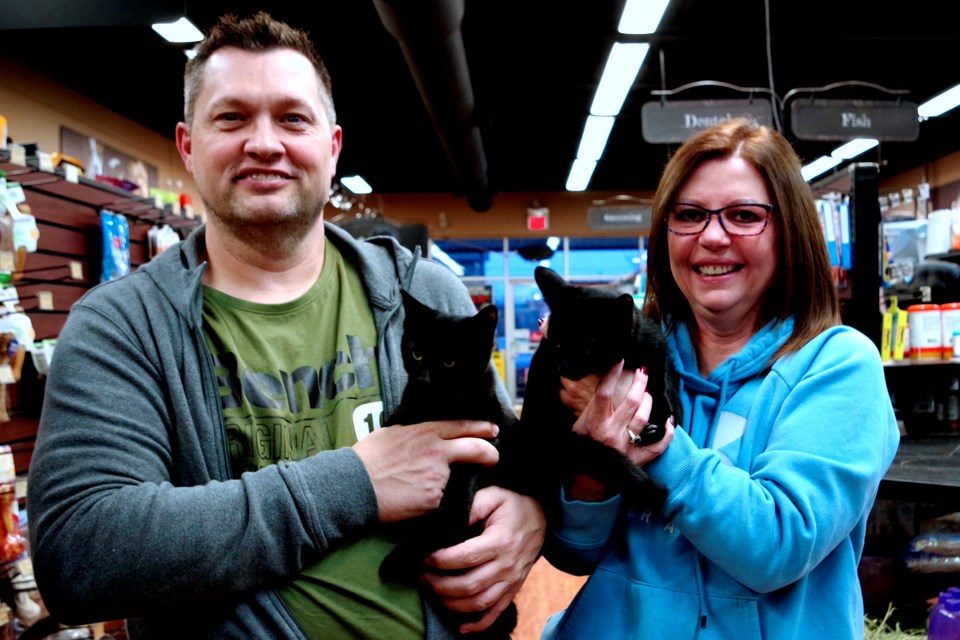 More than 50 cats have come and gone through the Gilbys' doors since they first became feline foster parents.

Oscar was their first rescue, 19 years ago.

“He'd been beaten up by a raccoon and had gouges taken out of his side," Denise told ThoroldNews.

“I had to put him down Christmas Eve. Whether they're in your house for two weeks or 10 years, it doesn't get any easier.”

For Denise and her husband Kevin, the loss of beloved pets comes with the territory of fostering their family of fur babies.

As vice-president of the Animal Assistance Society of Niagara (AAS), “I take the older cats that are more likely not to get adopted. Special food and medicines can scare people,” she said.

They once had a cat that couldn't stand up, “and we made a special box and helped her stand up.”

“Kevin will say, 'Just go get it,' when he hears of a cat in distress.”

Each morning, the Thorold South couple has their routine. Kevin cleans all the litter boxes while Denise tends to food and medicine.

“We have three diabetic cats and one who's allergic to his own saliva, and takes pills for allergies. It's an hour production for food and needles.”

Kevin's works full-time, and Denise somehow manages to cat-sit for another cat owner, in between juggling three part-time jobs and her menagerie. They've never been able to take a holiday together, and “Last year's bill for food and litter was $6,000, not counting cans of food or medicine, and we're okay with it, because this is what we like to do.”

Vets who work with AAS help them monitor medications.

“At first, I used to panic, and now I give needles and fluids in the back of the neck when they're dehydrated. Most cats with fatty liver tissue disease don't make it, but I've had two cats make it,” Denise said, proudly. “I wouldn't change it, because you see how happy they are when they bounce back. They all have part of you, but certain ones tug at your heart more.”

“Angel is my favourite,” she added. “She came to me as a foster through a veterinary clinic and has chronic upper respiratory
(issues). We didn't think she'd make it, and she's now 13. She's my favourite because every two hours, I had to force feed her and give her medicine,” during that initial rescue.

Denise and other AAS volunteers trap injured or wounded animals and bring them to safety, and pay the vet bills, funded through the non-profit society, now operating with about 10 volunteers.

“Cats have usually shown up in a yard and we get the call that a neighour has moved and left their cat. We look for a microchip,” which vets insert between a cat's shoulder blades, she added. “It's very important that they get it. A lot of vets can scan the cat's back, and the Welland Humane Society does it for $20. It's better to get it done when they're getting spayed or neutered and are already under anaesthetic.”

Anthony Savoia is president of AAS, and works with Thorold Pet Valu at the Pine Plaza to help facilitate rescues.

“You may have had your cat for years and it gets sick, so we try to help people keep their cats. There are always lots of people that can't afford surgery” or vets' bills, Denise said, and that's where AAS comes in. “We will not put a cat down if it can be helped. We don't put money toward putting them down if there's any other way.”

However, “We always need funding,” she said.

Anyone wishing to donate money, cat food, blankets, toys, treats, or their time; as well as people who need help with an animal, can call 289-271-1024, email animalassistsocietyniagara@gmail.com, or visit them on Facebook.