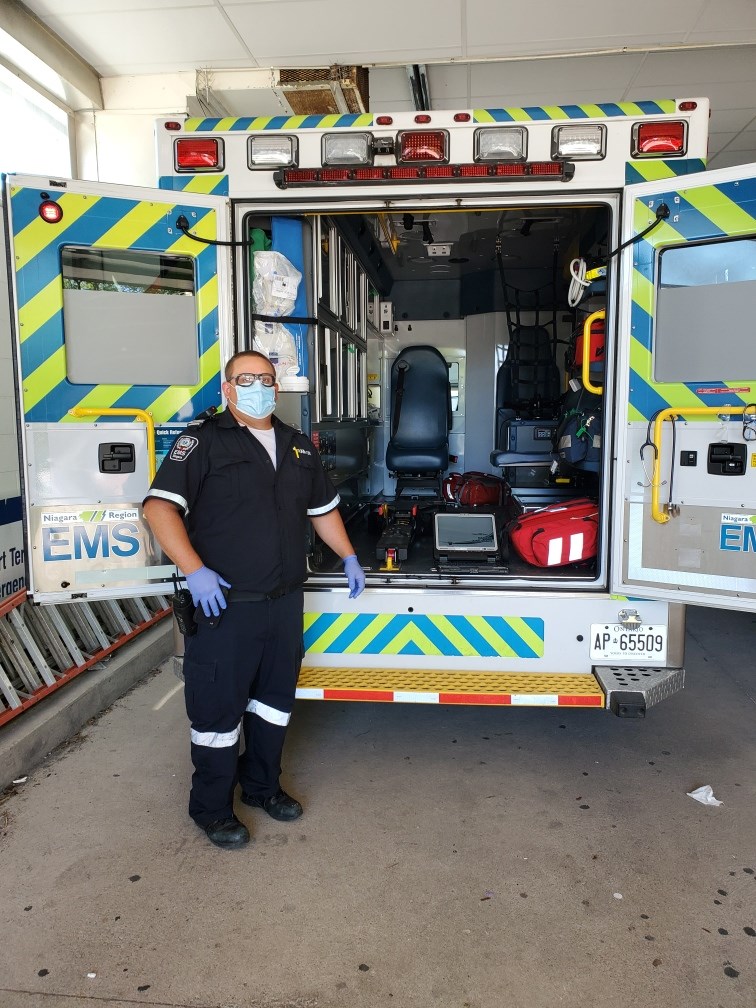 Aaron Motchka doesn’t consider himself a hero, despite his profession receiving unprecedented amounts of attention.

Instead, he calls himself a realist - it is what he relies on to get the job done when he comes to a scene.

The native Thoroldite, soon 38 years old, has a career as a first responder that goes back 12 years, 11 of which he has spent serving Niagara.

“Any day during your 12-hour shift, you have to expect that you could have to go on the worst call of your life. But I understand that bad stuff happens and that it what I signed up for. After 12 years you harden up a bit, there is not much that surprise me anymore,” said Motchka in an interview with Thorold News.

But, he admits, the past months things have been a bit different, with some calls nagging in the back of his head as he gets off his shift and drives home to his family.

The culprit in the drama: COVID-19.

“We responded to quite a few calls from retirement homes. Some of those calls were the most heart-breaking I have ever been to. There were a few where old married couples contracted COVID-19 and asking each other to stay alive. It was tough,” says Motchka.

But despite being faced with a traumatic scene, he still has a job to do.

“You just have to be extra careful, use personal protective equipment to not pass it to anyone there, and get them to the hospital.”

However, he said, things are actually looking up after some scary months of uncertainty as 30 or more new cases would present.

“The numbers now are fantastic. Our call volume has dropped dramatically since the start of the pandemic.”

He also thinks locals have finally gotten the message about social distancing.

“Driving around in Niagara Falls on a nice day now, and you only see handfuls of people. It seems people are getting it.”

What has not been talked about enough though, said Motchka, is what actually happens when a person contracts the virus that is still around.

“One of my relatives was on a ventilator for three days. It is horrible, it is long lasting. Some people don’t seem to understand that this can cause impairment for the rest of your life.”

That is also why Motchka and his wife, a nurse at the St Catharines hospital, are spending long hours by the laundry machine and keeping surfaces disinfected, making sure they don’t bring the virus home to their children, 1 and 5 years old, and to protect the third one that is expected to arrive in December.

It’s a grind – but the pandemic has not allowed for much else for the Thorold family.

The upcoming summer downtime with friends, watching ballgames in Cleveland, Ohio and a planned meetup with friends in Michigan in the middle of July have been cancelled.

While he is excited for the region to enter Stage 2 of the re-opening, Motchka said the most valuable time right now are the two hours each night he gets to spend with his partner Amber, who has had to take up the opposite shift to the one Aaron is working to take care of the kids.

They like to play cards together – a hobby Aaron introduced, unknowing he had faced a worthy adversary in the game of cribbage.

“She usually beats me.”

How a Thorold fitness trainer keeps in touch with her community during the pandemic
Jul 10, 2020 3:21 PM

Annual Peter Saracino Alzheimer Golf Classic cancelled
Jul 10, 2020 7:00 AM
Comments
We welcome your feedback and encourage you to share your thoughts. We ask that you be respectful of others and their points of view, refrain from personal attacks and stay on topic. To learn about our commenting policies and how we moderate, please read our Community Guidelines.