An entry in a brochure printed when Thorold hosted the Ontario Firefighters’ Convention in 1975 highlights how a dedicated group of St. John's residents raised money for--and built--Stn. 4, along with its equipment, to form a fire brigade.
Jul 21, 2019 8:00 AM By: Cathy Pelletier 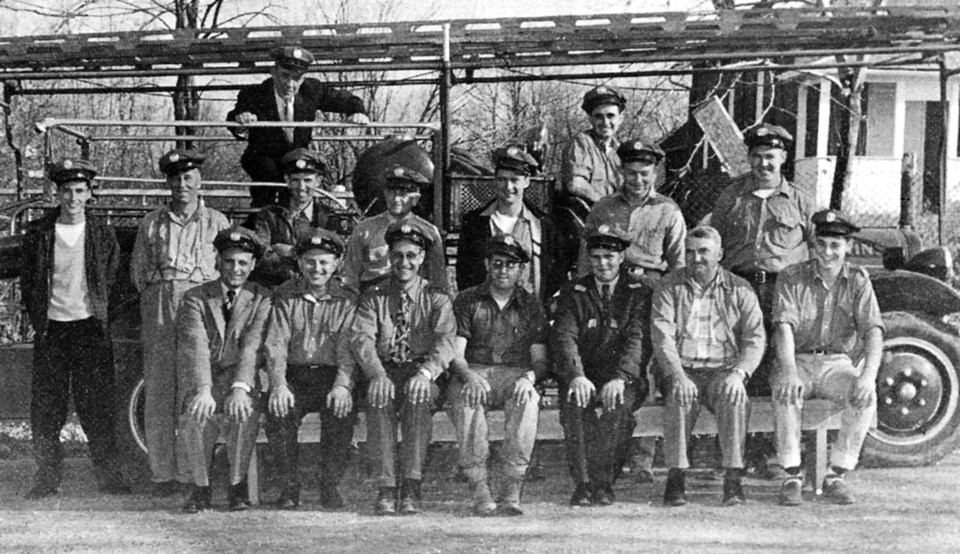 It all started almost by accident, which makes the St. John’s Volunteer Fire Department, now Thorold Stn. 4, unique among its fire companies.

It started way back in 1953, when a few residents of St. John’s, who felt more adequate fire protection was needed in what was then a remote corner of the Township of Thorold, met to discuss the problem. Only an auxiliary force was at first envisioned, which could assist in an emergency until regular firemen arrived in the area.

It was to consist of a portable pump, some hose that could be begged or borrowed, a phone call system, and as many willing hands as could be mustered. The pump and the hose would be rushed to the fire in a pickup truck, hopefully finding water at the site, and to do whatever could be done until regular firemen arrived, perhaps from Thorold South or Fonthill.

As St. John’s is on the boundary line between Thorold and Pelham, the risks were great as the back hill roads could tax men and machines to the limit; especially if the weather was bad.

The information of the fire department was brought about by the late William McLeod, who became its first Chief. Also in at the planning stage were James Abbott, Herb Cooper, Maurice MacPherson and Ron Rewbury. They called a public meeting in the now torn down St. John’s schoolhouse Feb. 27, 1953, to sell the idea to area residents living in both Thorold and Pelham townships. It did not take much selling due to several bad fires in the district during the previous months. That night, 18 volunteers joined to form the new fire department.

The unique part of the whole thing was that for a number of years after the original founding, the firemen had built their own hall from money they borrowed or raised, and had also purchased their own equipment without the aid of grants from the municipalities in which they operated.

Later, Thorold Township and Pelham came to their assistance by allotting standby fees and fire payments. But the going was tough. If the men had not worked continuously to raise money, the whole thing would have collapsed. Their tireless efforts produced dances, strawberry festivals,and auction sales, to say little of house-to-house canvassing. But it all paid off.

Eventually, the St. John’s Fire Department (Stn. 4) was well-equipped with modern firefighting apparatus and radio which connected it with all other Thorold Departments, to make if one of the town’s units that was ready and able to assists any of the other units upon call.

Then started the long arduous drive for funds, which included patrolling the Merrittville Speedway each night.  This proved a challenge for the fledgling members as car fires during a race often endangered the lives of the drivers, putting a great responsibility on the new firemen, but the experience made them grow up fast.

The first equipment was an old Reo Pumper, purchased for $400 on April 15, 1953. It certainly wasn’t the best, but it filled the immediate need. It had formerly been owned by the Falls View Fire Department at Niagara Falls and was purchased by a private individual to pump out basements before resuming its duties as a fire truck again. In June of that same year, the men bought a heavy duty truck and equipped it as a water tanker.

The erection of the fire hall started in October, 1953. Land for this purpose was donated by Keith MacLeod, father of the original chief. It was deeded over to the Township of Thorold, and during the fall, work on the building advanced at a rapid rate, much to the consternation of the firemen’s wives, who never knew when their husbands would be home for supper, or for anything else, for that matter. This continued all that following winter.

The building, although far from complete, was able to house the trucks by the middle of winter. A capacity turnout witnessed the official opening of the hall Nov. 12, 1954. The 50- x 32-foot building cost less than $5,000 to erect because most of the labour was donated by the firemen and their friends.

At the opening, work and money-saving efforts by the volunteers was highly praised by Reeve Hugh Summers of Thorold Township and Reeve Horace Kilman of Pelham Township. Deputy-Reeve Mel Swart of Thorold Township and Deputy-Reeve McGlashan of Pelham also took part in the ceremonies. Special guests at the event were Dr. W. McMillan, MP, and Ellis Morningstar, MPP, for Welland Riding. Herb Cooper, the first president, cut the ribbon officially opening the hall.

A Red Cross ambulance was purchased in Oct. 1955, to act as a service vehicle and one year later a 1942 Air Force pumper was purchased at a cost of $2,700. Today (1975), the department consists of a new modern pumper purchased by the Town of Thorold, a smaller modern pumper built on a new chassis by the firemen themselves, a new tank truck and a newer service vehicle. It also owns portable equipment, lighting equipment, fire masks and tanks, oxygen equipment for first aid, and a special metal cutting saw to assist in the rescue of persons that might be trapped in burning cars or trucks. Radio equipment has been installed and now the St. John’s Department is included in a one-fire alarm system covering all Town of Thorold departments.

Peter Bronn held the position of Chief for several years, and it was his drive that brought the fire company to its present modern level. The 1974 president Max Cook played no small part in a morale-building program, and the present executive has done its part in making the department a real working unit in the Thorold firefighting system.

Since its inception, the St. John’s Fire Department has fought its quota of fires and has saved numerous buildings. Barn fires provide the most harrowing times for country fire departments as water is at a premium. To help solve this problem, the men built a portable canvas water tank. Water is emptied into the tank by the tanker, which shuttles back and forth to the nearest water supply while the pumpers use the water from the canvas tank to fight the fire. During the past several years, a number of the men have attended fire schools to upgrade their training.

One of the most notable fires fought was the barn of Russell Yungblut of Hansler Road, which was completely destroyed and 22 head of cattle lost March 21, 1955, and then 10 years later almost o the day on March 22, 1965, the new barn on the same location burst into flames and 42 cattle were lost. At the first fire, three departments were called to assist. They were Thorold South, Thorold Township Area No. 2, and St. John’s brigade.

The fire broke out about 1:30 a.m. The Yungblut family was aroused by a motorist who was passing the farm at the time and noticed flames shooting out from the roof. At the second blaze in 1965, three fire companies again fought the flames in bitter cold weather. Firemen were on the scene all night, pumping water from a creek. A total of 60 men with eight trucks were on the scene.

Since its inception, the St. John’s Department has had four chiefs: William MacLeod, William Wellington, Herbert Cooper and Peter Bronn.

To help recruitment, at present, the department sponsors a Junior Fire Department. This is composed of teenagers of the neighbourhood who, under the direction of the firemen, study firefighting principles with the hope of some day joining their “big brothers” in helping to make the Town of Thorold a bigger and better town.