Welland Canal at Allanburg attacked 178 years ago this week 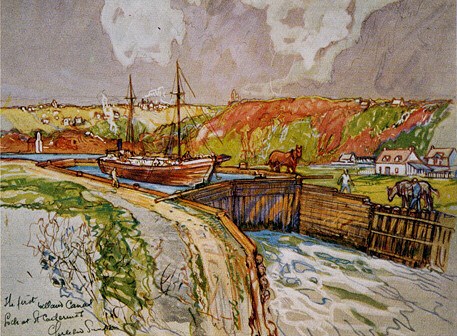 In his 'Looking Back' series, Thorold author Alun Hughes wrote an article entitled Terrorist Attacks on the Welland Canals. He described three attacks, with the first occurring at Allanburg in 1841. Following is an excerpt from that column.

The first attack on the Welland Canal took place on the First Welland Canal at Allanburg in the centre of Thorold Township. At about 11 p.m. on Sept. 9, 1841, a charge of gunpowder was exploded at the head of the upper of two locks in the village. One of the lock gates was completely destroyed, and a disastrous flood was averted only when the sudden rush of water caused the guard gate above the lock to slam shut.

A spare gate, stored nearby in case of  an accident, was quickly installed, and navigation resumed by noon the following day. A reward of £100 was offered for information leading to the arrest of the "evil disposed persons" responsible, but they were never identified, let alone caught.

There was much speculation as to who they were, most of it easily dismissed as wild rumour. But three strangers had been seen in the area prior to the attack and the local consensus was that they had come from Buffalo. Only the previous year in April 1840, the monument to Isaac Brock on Queenston Heights had been badly damaged by gunpowder.

Though nothing was ever proven, suspicion fell on Benjamin Lett, an Irish-born Canadian who as a member of Mackenzie's Patriots had been conducting guerilla operations from the United States since 1838, gaining him the sobriquet "The Rob Roy of Upper Canada." Though he was arrested by the American authorities on another matter after the Queenston incident, he escaped and was still at large when the lock was bombed. Lett, or others sympathetic to the rebel cause, may well have been responsible for the Allanburg attack.

Whoever it was, the assault caused considerable anxiety in the Niagara Peninsula. The War of 1812 was still in living memory, the Mackenzie Rebellion of 1837 was barely over, and after the attack on Brock's monument the frontier was patrolled by regular troops. Not only was the political situation unstable, but industry, commerce and finance were a mess.

Major changes were underway - the government had bought out the financially-strapped Welland Canal Company, construction had begun on the Second Canal, and Upper and Lower Canada had just been united into the Province of Canada. Change brought uncertainty, and the terrorist attack at Allanburg did not help calm nerves.
-------------------------------------------------
Alun Hughes' book, History Made in Niagara, is available at the Lock 7 Museum and Tourism Centre.