Thorold nearly had a car factory

This account of Thorold's near-miss with a car factory comes to us courtesy of Alun Hughes, History Made in Niagara.
0
Jul 13, 2019 10:00 AM By: Cathy Pelletier 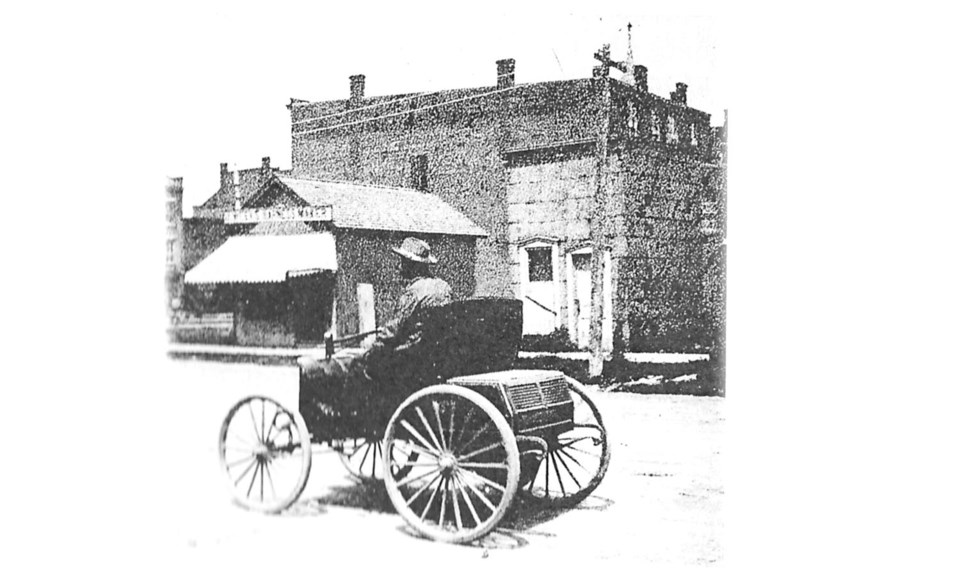 Duryea Wagon in Thorold, 1897. Photo History Made in Niagara

On Saturday, Aug. 7, 1897, the residents of St. Catharines and Thorold beheld a remarkable sight—a horseless carriage being driven through the streets. Very few people would have seen one before, for this was still early days in the evolution of the motor car.

The event was reported only briefly in the St. Catharines Standard and the Thorold Post, and the former did not even get the maker’s name right, writing Jurea instead of Duryea.

But subsequent issues featured long articles (one in the Post complete with a picture of the vehicle chugging along Clairmont Street) about plans to establish a factory in Thorold. This promised to be the very first car factory in Canada and one of the earliest anywhere in North America.

The 19th century was a period of intense experimentation in automobile building. Three technologies—steam, electricity and gasoline—vied for supremacy, with the gasoline internal combustion engine eventually winning out.

Development proceeded most rapidly in Europe, and by 1890, Germans Gottlieb Daimler and Karl Benz, working independently, had produced the first gas-powered vehicles. Meanwhile, various backyard tinkerers were at work in the United States, making their own (usually very short-lived) models.

Among the pioneers were the Illinois-born Duryea brothers, Charles and Frank. While they cannot claim to have built the first gas-powered car in America (it is uncertain who deserves credit for this), they were definitely the first to set up a company for the manufacture of such vehicles. This was the Duryea Motor Wagon Company, founded in September, 1895.

Early in 1892, when the brothers were in Springfield, Massachusetts, Charles drew up basic plans for a gas-powered car and engaged Frank to construct it. In September, Charles returned to Peoria, Illinois, to attend to his other interest, making bicycles. This left Frank to carry on alone and after a year’s work, he took the car for its first test drive. Charles would later claim that he had built the first Duryea, but it was Frank who did most of the construction and much of the design. This he made quite clear in his book, America’s First Automobile, published in 1942 in response to a proposal to erect a commemorative plaque to Charles on the State House in Boston.

In 1895, Frank brought out an improved model, and in November took part in a 54-mile race organized by the Chicago Times-Herald. There were six entries: three Benz cars from Germany, two electric vehicles, and the Duryea. Conditions were appalling, with deep snow and icy temperatures. Only two cars finished—a Benz, and ahead of it, the Duryea, which won despite having to stop twice for repairs. Fortunately, a blacksmith and a tinsmith were conveniently located en route (though the latter had to be roused from bed). The winning time was over 10 hours, including two hours for the pit stops.

In 1896, a newer Duryea won the Cosmopolitan Race in New York City and the inaugural London to Brighton Road Race in England, and it was this Duryea that came to Ontario in 1897. The objective was to find a Canadian factory site. Cars inherited the high tariffs imposed on carriages, which made exporting them to Canada uneconomical. A branch plant would solve this problem and also provide access to the lucrative British Empire market.

The company was granted permission to import a vehicle for three months, so long as it was not put to any commercial use. The brothers were evidently still cooperating at this stage (this ended the following year), for while the car was Frank’s from Springfield, the point man was W. P. Williams of the Canada Manufacturing Company of Carteret, New Jersey, with which Charles had become involved.

Events moved fast. An application was made for incorporation in Canada, with none other than Timothy Eaton as one of the directors, lists of proposed products were published (among them, omnibuses, delivery wagons, motor boats and stationary engines), and in September, Frank Duryea himself came to Ontario.

What the prospects were elsewhere is unknown, but a Thorold factory was a distinct possibility. Williams spent a couple of weeks surveying sites in town, and spoke of locating in Welland Mills and the casket factory. The initial labour force would be 200, increasing to 400 if exports to Australia could be secured. Following a presentation to the Town Council, a two-man delegation (Board of Trade members William McCleary, MP, and William Macartney) was sent on a fact-finding trip to Springfield and Carteret.

Their report was mixed. Springfield had good people, but the workforce was small and cautious about expanding. Carteret had a large factory built to make railway cars, which had been adapted  for automobile manufacture; none had been made yet, but a motor boat and omnibus were essentially complete. In a sense, the know-how and experience were in Massachusetts with Frank, but the get-go and resources were in New Jersey with Charles.

In the end, the Duryea brothers never came to Thorold. What may have killed their venture was their request for a $20,000 bonus, to be spent on land, buildings, water power and machinery, in return for which the company would remain in Thorold for 20 years and require all employees to live in town.

Such an incentive was legal under the Town of Thorold Improvement Act passed in April, 1897, which permitted bonuses of up to $30,000, subject to approval by two-thirds of the ratepayers. The Town Council Minutes and the Thorold Post are silent about what happened, but Council evidently did not pursue the matter. Since this was the same Council that refused to spend $20 to replace the police chief’s “shabby” uniform, and declared itself too “poverty-stricken” to donate even a token amount to the Lieutenant-Governor’s Indian and Famine Relief Fund, this is perhaps not surprising.

In December, 1897, the Post reported that W. P. Williams “is now in Toronto superintending the construction of motorwagon for the T. Eaton Co.,” but nothing “seems to have come of that, either.”