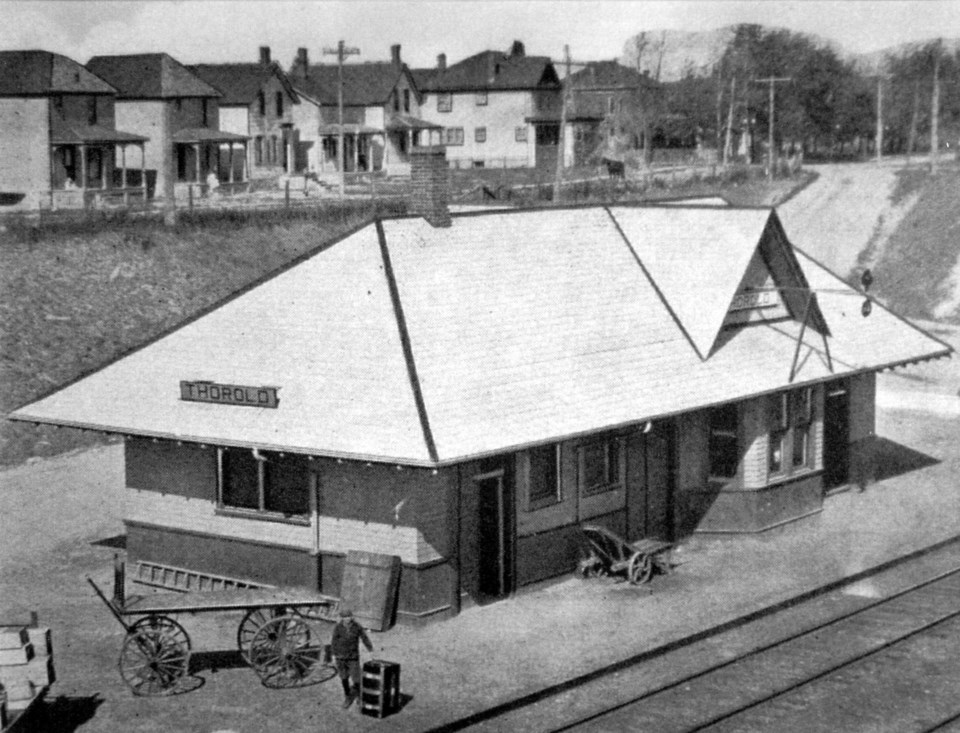 During the Civil War in the United States, Thorold shared in the general prosperity enjoyed by the Canadian manufacturing towns, which were constantly shipping goods to the neighbouring republic.

In 1850, Thorold was incorporated as a village, and in 1874 the act was passed by which it became a town.

It has several times suffered from fire: In 1857, the Parke & Cowan mill was destroyed; in 1858, several good dwelling houses were burnt; and in 1866, a great fire destroyed 40 buildings.

The latter catastrophe originated on the west side of Front Street, on a very windy Sunday in April. Most of the townspeople were at church when the fire broke out. When the smoke was first seen, the news was quickly sent to the Methodist minister, who at once quietly dismissed his congregation. All the people then turned out to try to check the fire.

The town possessed only a hand engine at that time, and although a St. Catharines hose company came up, it was impossible to check the flames until they had carried off all the business portion of Front Street. On Clairmont Street, too, the fire spread as far east as St. John’s Church, destroying nearly all the buildings in its path.

Since that time, many small fires have occurred; the most destructive being the one that occurred in 1891; but the town is now well-protected. The two canals furnish a never-failing water supply, and the very efficient fire company nearly always prevents the flames from gaining any headway.

On the 18th of April, 1882, a street railway took the place of the bus line that had for some years connected Thorold with St. Catharines. In 1887, the electric system was introduced, the first car being run to Thorold on Oct. 5 of that year. This was the first use of electricity for carrying passengers in Canada.

Before the trolley system was used on the St. Catharines and Thorold road, one car had been run by electricity at Windsor, Ontario, but it carried no passengers. Besides the distinction that its seniority gives it, the Thorold road is important because of the hilly nature of the region which it traverses.

The town has been lighted by electricity since 1887. The lights are particularly good, and can be seen distinctly from Upper Canada College at North Toronto.

The Lorne Curling Rink has been the first place in Thorold to use acetylene gas for lighting purposes.

Three times in the course of its history, Thorold has been honoured by a visit from the Governor-General. In 1850, Lord Elgin, accompanied by several members of the government, came to visit the Canal. He drove from Port Dalhousie to Thorold, and at this point, the steamer Brittania took charge of his party and conveyed it to Port Colborne.

In 1874, the whole town turned out to do honour to Lord Dufferin, who also came to inspect the great Government work. The 44th Battalion formed a guard of honour for His Excellency. The following address was presented by Mr. John McDonagh, the Reeve for that year:

“We, the Reeve and Council of Thorold, on behalf of the inhabitants, beg leave to approach Your Excellency with assurances of loyalty and devotion to the person of Her Majesty the Queen. We also take this opportunity of expressing our respect and esteem for yourself, both personally and as Her Majesty’s representative, and of welcoming you and the Countess of Dufferin to the Niagara peninsula. Your Excellency, during the visit you are about to make to the public works now in the course of construction in this place, will behold an undertaking creditable to the energy and enterprise of the Dominion, and destined, we believe, to be the great highway of the immense carrying trade between the great West and Europe, and to advance the interests and prosperity, not only of this part of the country, but of the whole of Canada. We have no doubt that Your Excellency will appreciate the importance to the general interest of the country of the manufactories, and other industrial establishments on the line of the Welland Canal. While knowing that your extended tour through the province of Ontario will be taken advantage of by you to increase your knowledge of the country and its people, we trust it will also be productive of pleasure to you, Lady Dufferin and the members of your family. W. T. Fish, Clerk. John McDonagh, Reeve.”

Lord Dufferin’s reply is thus given in the History of Welland County:

His Excellency expressed the pleasure it gave him to receive an address from the inhabitants of Thorold—a place to which, by its connection with the Welland Canal, considerable attention was at the present time directed, not only from all parts of the Dominion, but from the United States. It was impossible to over-rate the importance of those works now in progress, whose magnitude was a measure of the advancement which had taken place in the aspirations of the government and of the people of Canada since the present Welland Canal was constructed. During his present tour, he had visited the distant waters of Lake Superior, and he had arrived at t conclusion that no reasonable man could doubt that within a few years, the industry and energy of the Canadian people would conduct the waterways of the Atlantic to the head of Lake Superior (applause). Neither was it possible to over-rate the consequences that would flow from these great works. no one could look upon the navigation of the northern parts of North America without perceiving that the River St. Lawrence and the chain of lakes that empty their waters into it are destined to be the highroad along which all the productions, not only of the Canadian Northwest, but also of the northern valleys of the Mississippi and its tributaries, would pass (cheers). It must necessarily follow that a community located upon that great thoroughfare would immensely profit by the stream of commerce that would flow beside them, and he (Lord Dufferin) sincerely trusted that a great deal of the advantage to which he referred would stick to the fingers of the people of Thorold (cheers). In conclusion, he thanked them for their kind expressions in their address with regard to himself and Lady Dufferin, and assured them that he would always watch with great interest what he trusted would result in rapid improvement in their circumstances.