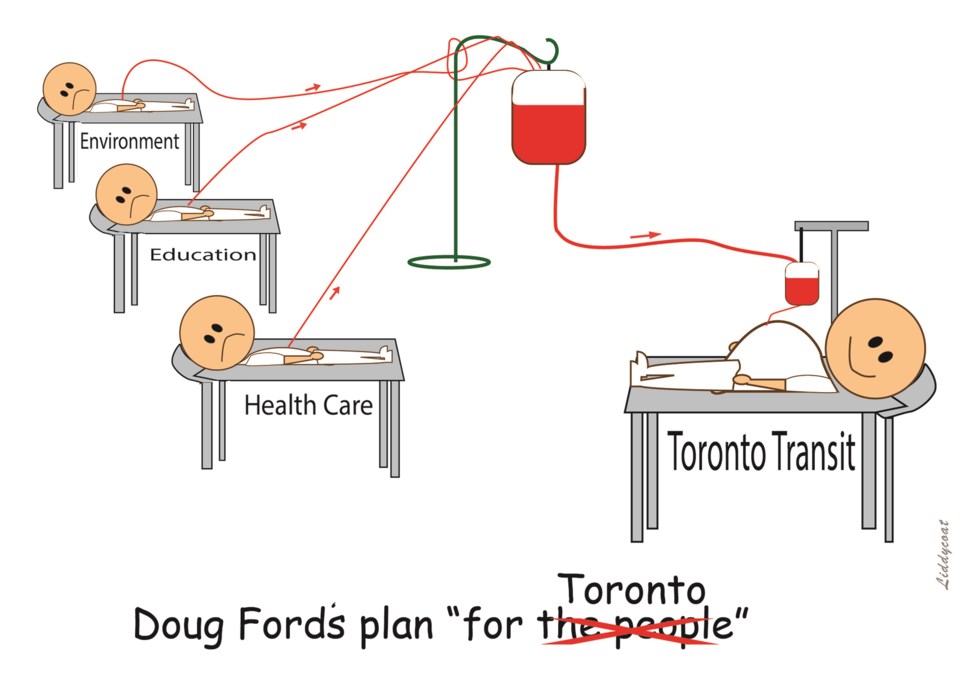 Anybody who believed that Doug Ford’s primary goal is to lower the provincial deficit better take another look - this time with open eyes.

The goal appears instead to become a hero in the City of Toronto, where he was shunned in his bid for mayor.

While this government has continued to slash and burn health care, education, environmental safeguards, libraries, legal aid, and endangered species protection, to name a few, Ford now wants to spend hundreds of millions on Toronto transit, effectively forsaking everyone in the province except TTC riders. It's ludicrous.

Uploading the cost of new TTC lines to the province is no way to lower the deficit in Ontario. How can that be argued otherwise - by anyone?

Adding insult to injury, he’s fighting the federal carbon fax, which Ford brought down upon us. He's now spending millions more of our tax dollars forcing two levels of government to battle each other. How much will that add to the deficit of both levels?

The Globe and Mail reported in October 2018, “Ford government’s decision to cancel the province’s cap-and-trade system will lead to a loss of $3-billion in revenue over the next four years."

Does he seriously think we will forget it's he who scrapped the cap-and-trade program? He gave up billions in cash knowing well full the carbon tax would be levied upon citizens of Ontario.

And he knew the lost revenue cost would have to be picked up by everyone in Ontario who buys gas or home heating fuel.

Given this information, he must think we’re gullible as well. Otherwise, how can he force gas stations to post propaganda stickers proclaiming how much the carbon tax will cost us? It's the standard illusionist trick of misdirection.

Furthermore, the same day Ford announced he wants to cut OHIP coverage to anyone who travels outside of Canada, he promised "100 per cent support" for Muskoka flooding. He is abandoning citizens who may be in crisis, and who have paid into OHIP their whole lives, simply because they crossed over a line on the map, while at the same time funding other citizens in crises without any such insurance investment.

It's not that he shouldn't help flooding victims. It's simply a question of how can anyone with an intelligent brain not see the blatant contradiction in actions?

And his continuing download of services onto municipalities has not yet been analyzed. But one thing is certain - homeowners will be paying more property taxes. And voilà the illusion of the disappearing deficit is complete.