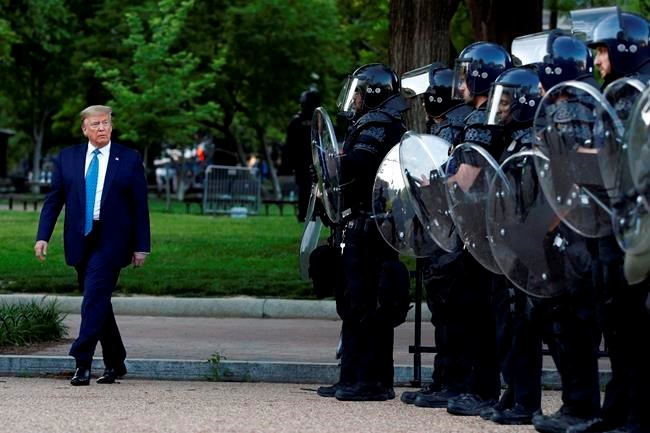 WASHINGTON — Press passes and television cameras, once powerful emblems of neutral non-combatants, are proving no defence for journalists covering the widespread public unrest in the United States.

The Nieman Journalism Lab, an offshoot of a fellowship program at Harvard University, catalogued more than 110 attacks on American journalists in just the first four days of the protests.

Social media platforms have been littered with images of police targeting reporters directly.

One widely shared image from Monday shows riot police using their shields and fists to lash out at a crew with cameras and microphones just outside the White House as they cleared a path through Lafayette Square for President Donald Trump.

Moments later, Trump — after promising to crack down on the violent protests and threatening to summon the U.S. military — strolled directly through the park on his way to a photo-op outside St. John's Episcopal Church.

Journalism scholars draw a direct line between the behaviour of police and the president's frequent rhetorical attacks on the mainstream media, but also note that cellphone cameras have blurred the lines between media and the public.