Salons and barbershops are starting to reopen in some parts of Canada with more on the way, but the industry says the measures needed to keep everyone safe while getting a haircut will mean a big financial hit
May 14, 2020 2:33 PM By: Canadian Press 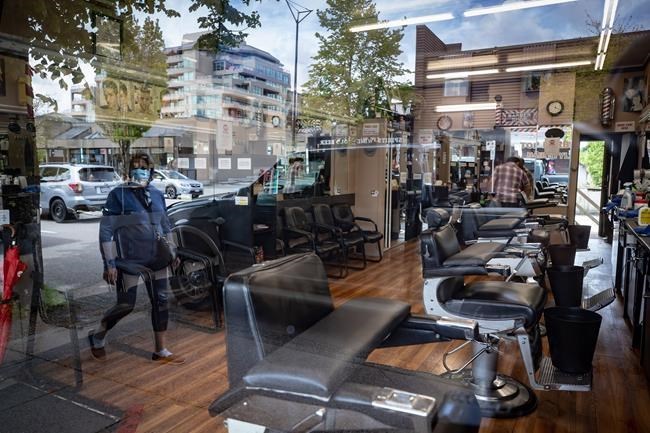 Salons and barbershops are starting to reopen in some parts of Canada with more on the way, but the industry says the measures needed to keep everyone safe while getting a haircut will mean a big financial hit.

Allied Beauty Association executive director Alain Audet said Wednesday that the necessary precautions will mean strain for an industry with a high proportion of self-employed workers and thin profit margins.

"It's not a very profitable business because it's service related, and a lot of that cost is staffing, so the profit margins are minimal."

The association, which notes the hairdressing and aesthetics sector employs about 300,000 Canadians, estimates an average of a 30 per cent loss of revenue as distancing measures limit shop capacity, and operators space out appointments to allow for more time to clean between clients.

Hair stylists also won't be able to double-book, such as slotting in a quick blow dry or cut while waiting on a colouring, while fixed chairs and wall outlets mean some operators won't be able to space out stations and may have to leave some empty.

But while it may be difficult to adapt, Audet said it's important that shops reopen if safe to do so, both to keep the businesses afloat and because the services can be helpful for personal well-being and self-confidence.

"There's a lot of emotional health that goes in there."

The association agrees that restrictions are important to keep everyone safe, and has put together its own suggested guidelines, though some provinces have gone ahead with their own regulations with varying degrees of latitude.

Manitoba, which started allowing hair stylists and barbers to reopen last week, requires staggered appointments to avoid congestion and food and drink services to stay suspended, though it doesn't require the use of masks and gloves.

Gerald Pankiw, a stylist and owner at The Loft in Winnipeg, said the salon has taken numerous precautions for their reopening such as wearing protective equipment, and temperature screening staff and clients, even if though the province's rules don't require it.

"[Manitoba's] protocols are quite weak in my opinion, but we went 110 per cent above and are wearing masks and gloves."

He said the salon is fortunate because at one of the biggest in the city at more than 4,000 square feet they have more space to spread out their stations, but spacing requirements still mean they only have about 10 stylists working at a time now compared with more than 20 before.

In response, the salon has extended its hours and may start opening Sunday to accommodate the strong demand that's seen them now booking months in advance.

"If you're a senior stylist and you're booking well into two months, it's really hard to squeeze someone in without overlapping on someone else's chair time."

Prince Edward Island, which will allow shops to reopen May 22, requires sanitizing all chairs, tools and capes between clients, that employees wear a mask and gloves, and has banned the use of neck brushes.

Saskatchewan is slated to allow the services to reopen May 19, with requirements similar to P.E.I., while Alberta may reopen services as early as Thursday with a variety of recommendations but few strict requirements.

This report by The Canadian Press was first published May 13, 2020.