Some major names have already ditched print for digital and this could be an opportune time for others to follow suit without angering customers, says one expert
Apr 14, 2020 1:27 PM By: Canadian Press 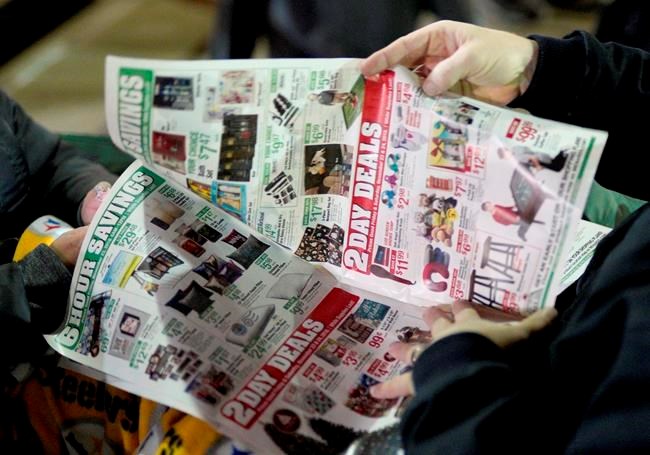 TORONTO — Brent Barr has a wistful affection for the weekend tradition of flyer browsing.

Every Saturday morning, he and his wife gather at the breakfast table to rifle through a stack of newsprint ads from the local grocery stores and retailers, on the hunt for an especially attractive deal.

"It's funny how it's become just part of what we do," said Barr, an instructor at Ryerson's Ted Rogers School of Management.

"We literally go through each one of the flyers."

But lately, that pile of weekly flyers is getting noticeably thinner as the ripples of COVID-19 affect the retail sector. Industry observers say it could be the global pandemic that finally sounds the death knell for the time-honoured marketing tool.

The decline of paper flyers has been ongoing since digital versions gained in popularity, but amid the pandemic some retailers are flirting with a wider phase-out of the format.

Last month, a number of brands owned by Loblaw Companies Ltd. pulled their in-store flyers as a preventive measure partly in response to concerns the newsprint could become a vehicle for the virus to spread.

Once that change took shape, the company went a step farther by announcing plans to permanently stop producing paper flyers for several of its chains, including No Frills, Real Canadian Superstore and Maxi.

Spokeswoman Catherine Thomas described the move as "transitioning" into a digital medium, as promotions shift to online spaces and through the PC Optimum app, which includes a weekly digital flyer.

Canadian Tire began testing the fate of its own flyers on Friday when it notified customers that it had "temporarily paused" distribution in Ontario, while shoppers outside the province would be handed single-use paper copies at stores upon request.

Walmart Canada paused its print flyer for two weeks early in the COVID-19 pandemic but has since resumed production.

Elsewhere, a representative for Montreal-based grocer Metro Inc. last week said the company plans to maintain its flyers. Sobeys and Safeway owner Empire Co. did not respond to requests for comment.

The decision by Loblaw to reduce its flyer production could influence others in the industry to reconsider how they allocate their marketing budgets, said Brynn Winegard, a marketing and retail analyst.

She pointed to a growing number of shoppers across all demographics who use their phones to compare competitor's prices while in a particular store, making the traditional flyer less effective from the perspective of retailers.

Add to that the financial uncertainties for businesses operating in a pandemic, and Winegard expects more retailers will adopt a "pivot or perish" instinct as they search for ways to eliminate costs.

"We haven't seen anything like this before — no one has in any industry," she said.

"But if you're not flexible and nimble in the way that you do business, you're not likely to survive."

Digital flyers have existed in the retail space for the better part of a decade, with online tools Flipp and Save.ca amassing a database of weekly editions from major chains, while web forums such as Red Flag Deals debate who has the best deals.

The cultural shift leaves industries that rely on the revenues of print production and flyer distribution, vulnerable ahead of what economists predict will be a devastating recession.

Newsprint producers count on retail advertisers to keep operations humming, while many of the country's newspapers stay afloat partly on the support of nationwide inserts from major chains.

Canada Post, which handles the weekly delivery of flyers through its direct-mail service, said it has seen a "notable decline" in this part of its operations "as companies re-evaluate their business priorities during this unprecedented time."

It's too early to determine exactly how many paper flyers will disappear in the coming months, but Barr suggested that if retailers are looking to exit the business without angering many customers, now could be an opportune time.

He pointed to elderly shoppers who might've been reluctant to adopt computers before COVID-19, but are now forced to communicate by digital devices to maintain contact with their families. He said that's opened up the likelihood they would entertain the thought of a digital flyer.

"I think most people will recognize that it's a requirement for now," he said, "and once they get used to it, they will not be that apprehensive in the future."

This report by The Canadian Press was first published April 13, 2020.