Ford says the front lines of the battle against the virus have shifted to seniors homes, with 93 outbreaks at such facilities across Ontario
Apr 15, 2020 9:24 AM By: Canadian Press 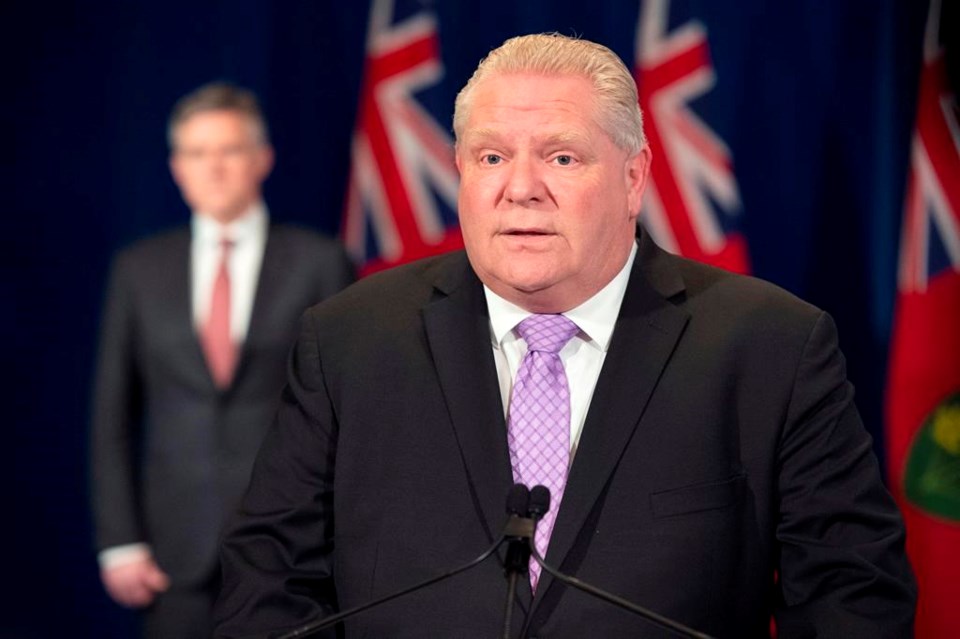 TORONTO — Premier Doug Ford opened the door Wednesday to systemic changes to Ontario's long-term care system, where a significant portion of the province's COVID-19 deaths have been recorded.

"There's cracks," Ford said after announcing additional testing and infection control measures. "We have to raise the standards...This is a wake-up call to the world, not just Ontario."

In the meantime, Ontario has issued an emergency order preventing long-term care staff from working at multiple homes. The province has acknowledged that some outbreaks in those facilities were the result of staff who work in two or three homes inadvertently bringing in the virus.

Though the government described it as a 14-day order, it takes effect April 22 and is only in place for six days. The government said it will likely be extended, as with its other emergency orders.

Long-Term Care Minister Merrillee Fullerton said it is an interim solution, and that Ontario will work with the federal government to address wages for those workers while they are prevented from working at more than one home.

"This is a temporary measure to allow for the reduction of the spread of COVID-19," she said.

Health-care worker unions have long raised the issue, saying staff often work at multiple facilities because they're unable to get full-time positions.

The NDP said the order contained a "giant loophole," which it said would allow temp agency long-term care staff to continue to work at multiple locations.

The president of the Ontario Nurses' Association echoed that concern and said the government has needed to take more decisive action to address the outbreaks for weeks.

"If they don't do something to curtail agency workers going from nursing home to nursing home, what's the point?" Vicki McKenna said. "This has to be top down. This should be all workers."

The ONA and the Registered Nurses' Association of Ontario have long been raising concerns about the continued practice of staff working in multiple homes.

Doris Grinspun, CEO of the RNAO, said she was pleased to see the government ban the practice for now but stressed that workers must be brought up to full-time hours or have their wages augmented.

"These individuals, 45 per cent of PSWs, they work in two or three places," she said. "We cannot just say to them, you can only work in one place. We have to say to the employers, give the full-time hours."

The government said it "encourages long-term care employers to offer full-time hours to their part-time employees during the COVID-19 outbreak."

The Ontario Long-Term Care Association said "while the long-term care action plan will take careful implementation," restricting workers to a single site — in addition to more testing, personal protective equipment and other supports — will be "fundamental to stabilizing homes."

Fullerton said before the pandemic she had been looking at ways to address personal support worker shortages in long-term care homes, and defended the government's actions so far to try to limit the impact of the virus in those facilities.

"This is an unprecedented tragedy and we acted swiftly months ago to make sure that there was proper screening, active screening, barring only essential visitors into the home," she said.

Ontario issued guidance to long-term care homes on active surveillance — meaning staff, volunteers, visitors and residents who may come and go are checked for symptoms and asked about travel history — in early March and non-essential visitors were restricted shortly after.

The province also announced Wednesday that it will test asymptomatic residents and staff in select homes, support long-term care homes with more public health and infection control expertise, provide additional training for staff working amid an outbreak, and redeploy staff from hospitals and home and community care.

"We owe it to our most vulnerable, we owe it to their families and loved ones to fight this terrible virus until the end," Ford said.

"We owe it to them to leave nothing on the table. Today we're throwing everything we've got at our long-term care homes."

That brings the total cases in the province to 8,447, including 385 deaths and 3,902 cases that have been resolved.

The total number of cases grew by just over six per cent, continuing a relatively low growth trend in recent days. And while there are now 795 people in hospital with COVID-19 in Ontario — 26 more than on Tuesday — the number of people in intensive care and on ventilators dropped slightly.

Modelling had predicted that in a best case scenario there would be about 1,100 people with COVID-19 in intensive care now, but that number has hovered around 250 for about a week.

"The way I read it is that we have been doing our duty as Ontarians, collectively, on the physical distancing and we are in fact bending the curve," he said.

Williams said Wednesday that new case numbers suggest that in terms of community spread, Ontario may in fact be past the peak, with a large number of new cases coming from long-term care homes.

The virus continued to spread in those facilities, with 98 homes reporting COVID-19 outbreaks that have killed at least 145 residents.

Testing has been expanded in long-term care homes, which the Ministry of Health says has increased the number of COVID-19 tests under investigation. That number doubled in the past day, to 4,429.

There were just over 6,000 tests completed in the previous day despite a promise from the government to do 8,000 tests a day by Wednesday.

This report by The Canadian Press was first published April 15, 2020.

— with files from Shawn Jeffords