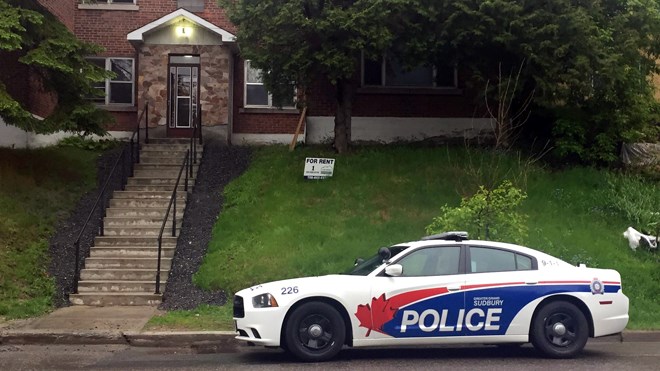 A GSPS cruiser is parked outside a Riverside Drive apartment building while officers search the apartment of Alexander Stavropoulos, the man arrested and charged with the Marcus Drive knife attack. (Sudbury.com)

SUDBURY - The health status of a mother who was stabbed in the neck in the parking lot of a Marcus Drive retail complex has been upgraded to stable, Sudbury.com has learned.

The woman was brought to Health Sciences North on Monday in critical condition after a man armed with a knife attacked her. Greater Sudbury Police believe the attack was entirely random and the victim and the attacker were not known to each other.

An infant, who sustained multiple bruises during the attack, is being cared for by family members, police said today.

Meanwhile the investigation into the attack continues.

On Tuesday, police they had arrested and charged Alexander Stavropoulos, 25, with two counts of attempted murder, two counts of possession of a weapon for a dangerous purpose and one count of breaching probation.

A bystander intervened in Monday's attack, tackling the man with the knife and pinning him to the ground until police arrived, while other eyewitnesses rendered first aid to the injured mother.

Since Tuesday, police had been stationed outside Stavropoulos' Riverside Drive apartment day and night, awaiting a search warrant. As of Wednesday afternoon, it seems the search had been completed and officers had left.

Stavropoulos is known to police. In April 2018, he was shot by police in the downtown transit terminal. You can watch video of that below.

On April 1, 2018, Stavropoulos, who is from Toronto, arrived at the downtown terminal with two knives and attempted to force his way into the security office.

After police arrived, he refused to surrender and charged officers, screaming and wielding the two knives, forcing officers to fire their weapons to stop him.

Stavropoulos was hit twice with a conductive energy weapon and was shot in the leg. He was yelling “white power” as police were arresting him.

In August 2018, he pleaded guilty to one count of carrying a weapon to commit an offence. His lawyer, Toronto-based Nicholas Xynnis, said he client was severely depressed at the time and the entire incident was an attempt at suicide – he hoped the cops would kill him.