They donated the stock from the Payless Shoe store to a program for hospital patients who need clothing
0
May 2, 2019 9:40 AM By: BayToday Staff 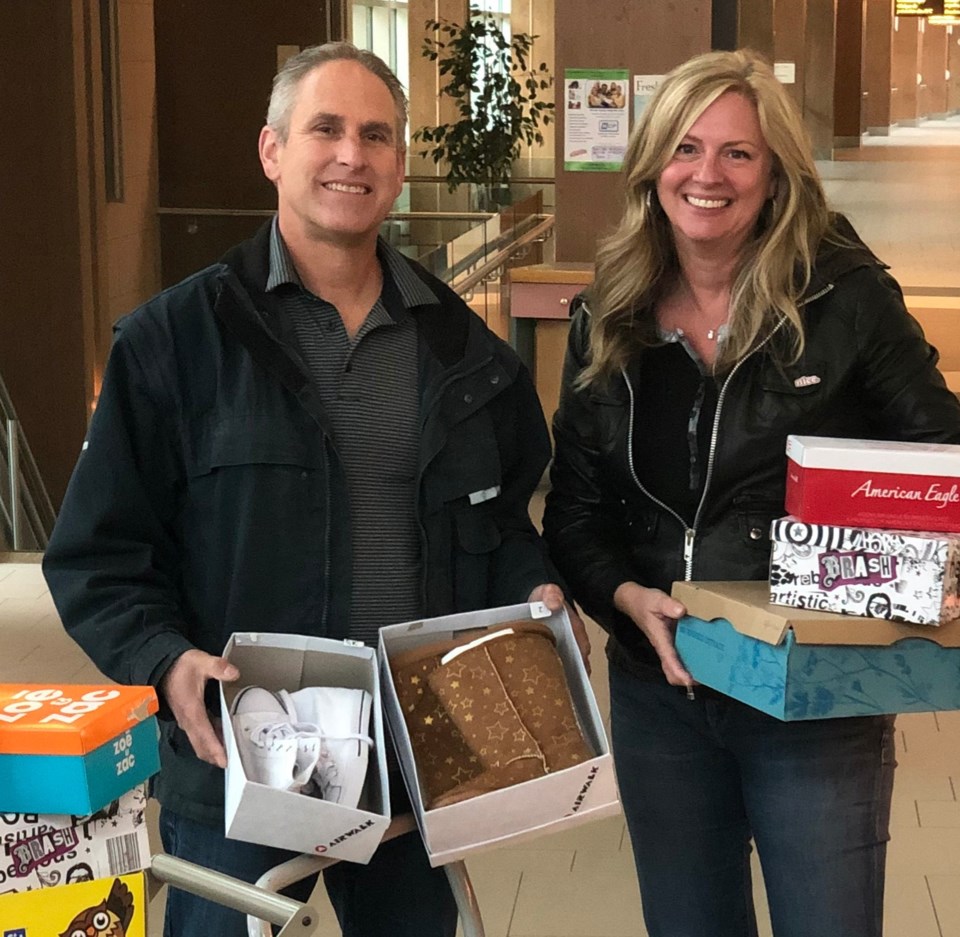 Laura and Norm Piche hold up a few boxes of shoes they purchased and donated to the North Bay Hospital Foundation. Photo submitted.

A North Bay couple got inspiration from a popular TV show to spread some kindness within the community.

Laura and Norm Piche purchased a large amount of heavily discounted shoes from the Payless Shoe store which is closing its doors at the Northgate Shopping Centre.

They were intrigued by an episode of the TV talk show Ellen, where a woman was being interviewed about buying shoes from closing Payless stores to donate to charity. The shoes were being sold at reduced rates, some as low as two dollars a pair.

“We both love the Ellen show and thought what a great idea and maybe we could do the same thing here,” said Norm. One of the Piche’s employees at Hume Paint Contracting also worked at Payless and helped facilitate the connection.

The Piché’s visited the store near the end of the closing out sale and purchased everything that was left for about $300 (total shoe value of approximately $2,400) allowing Payless to quickly finalize its closing process.

“We saw an opportunity to turn a negative into a positive and have donated 96 pairs of shoes to the hospital Foundation to help stock up the NBRHC clothing cupboard for patients,” said Laura.

“I serve on the Foundation’s Annual Giving Committee where I first learned of the need for new clothing and footwear.”

“Throughout the year, the North Bay Regional Health Centre treats patients who require clothing due to unforeseen circumstances. For example, patients who have suffered from various crises or trauma, arrive through the Emergency Department (ER). Appropriate clothing and footwear ensures patients who are discharged can leave the hospital safely and with dignity. We are grateful for this kind and generous donation!” said Tammy Morison, President and CEO of the NBRHC Foundation.

Laura says she has since tweeted the Ellen Show to comment how she and her husband were inspired by her program.

WATCH: 'We can't solve all of this overnight,' Trudeau says about systemic discrimination in Canada
Jun 5, 2020 2:50 PM
Comments
We welcome your feedback and encourage you to share your thoughts. We ask that you be respectful of others and their points of view, refrain from personal attacks and stay on topic. To learn about our commenting policies and how we moderate, please read our Community Guidelines.