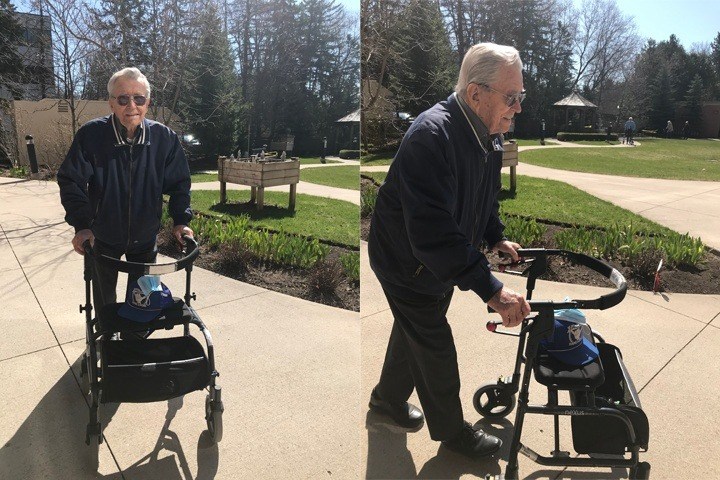 Newmarket resident George Markow is on track to surpass his goal of walking 100 km before his 100th birthday next April to raise $100,000 for Southlake and Sunnybrook hospitals. Supplied photo

Newmarket resident George Markow has been going around in circles for more than a month now to do his part to support the frontline health-care workers battling COVID-19.

The Second World War veteran, who celebrated his 99th birthday last month, is well on his way to meeting the challenge he has set for himself to walk 100 kilometres by his 100th birthday to raise $100,000 for Southlake Regional Health Centre and Sunnybrook Research Institute.

Since launching his fundraising initiative, inspired in part by his own grandson who is a paramedic in Muskoka, Markow has walked 50 kilometres, lapping the courtyard path at the Roxborough Retirement Residence, daughter Sylvia Perkins said.

Using his walker for assistance, he’ll walk that garden pathway more than 1,500 times to meet his goal, she added.

His GoFundMe campaign has raised more than $3,000 to date, and his friends and staff at the Roxborough are very supportive, Perkins said.

She’s proud of her “physically and mentally active” father, and the family is keeping in touch by phone and the occasional video chat due to the COVID-19 visitor restrictions at his home.

His effort and commitment are an inspiration to many during the pandemic.

“I donated because it’s a great cause, and George Is a Hero in my Eyes,” wrote donor Gerda Larson on his fundraising page.

“Go George Go! I am very honoured to support such an amazing man in his journey to support medical research. Thank you for having such a big heart,” wrote donor Aleksandra Leboeuf.

“You are an inspiration to all of us!” said donors Leanne and Michael McQuaid.

“If I can go past it, I will,” Markow said of his 100-km target, nonchalantly adding “since I’m halfway there now.”

He’s grateful for the care he and his wife, Lydia, who died at age 90, have received at Southlake.

“The hospital has been so wonderful,” Perkins said.

And Sunnybrook “literally saved his life” after he suffered a brain bleed caused by a car accident, she added.

He credits his long life, in part, to his commitment to staying healthy by walking and running throughout his life, and he hopes to inspire other seniors to stay active.

He’s saddened by the toll the coronavirus is taking on so many people, he said.

Perkins noted her father would never complain about anything, as he has faced much adversity in his life and “had never dreamed he could have such a wonderful life.”

“He’s very appreciative and very thankful for everything and that he was able to make such a wonderful life for his family,” said Perkins, an only child. “He always says, ‘I always chose the right fork in the road’.”

“If you only know how blessed we are, to live in a country like this,” Markow said.

Markow has written his memoir — “I scribbled what I could,” he said — titled My Not So Ordinary Life.

It is a remarkably detailed account that begins with his early years with his extended family in the small Communist Russian farming and fishing village where he was born on April 14, 1921.

“We had one horse, one cow, four sheep, one pig, and a dozen chickens that were our meat and milk supply for the whole year,” he writes.

“We lived in a house consisting of one living room with a Russian type of peshka (stove) and two cold rooms. Our whole family lived in one room — seven people — the other room we used for storage.”

There were no luxuries in his childhood, and often the basic necessities were hard to come by.

He was drafted into a communications unit in the Russian army at the age of 19, and was trained to operate a telegraph machine.

“On June 22, 1941, the telegrams were arriving so quickly that they couldn’t be delivered fast enough by just one guy, so I asked for help. Around seven at night I heard the horn sounding the alarm, so everybody had to assemble in certain places. But I had to stay on the job. Shortly after, I found out that the war had started — Germany had attacked Russia,” he writes.

He was ultimately captured by the Germans during the Russian army’s retreat, where he endured years of starvation and mistreatment.

“Conditions were so deplorable, prisoners were dying — I remember standing on dead bodies. Some prisoners, trying to escape during the night, were shot while climbing the fences, and their bodies were left hanging there,” he recalls.

He managed to escape in the spring of 1945 thanks to a French grape farmer, and with the help of friends and the use of a passport of a German who died in the war, he was able to survive until the war ended.

He finally made his way to Montreal in 1947, where his then-fiance Lydia had recently emigrated.

“The day came for me to board the ship. It was the second of March. The ship was a troop carrier named Cynthia. It was so huge, so tall, I was reassured that it could cross the ocean safely. I boarded the ship with all my worldly possessions: a blanket, a coat, a pair of boots, a hat, underwear, and a radio,” he writes.

Markow and Lydia started their life with very little, and eventually, he was hired to work at the  Ford plant in Oakville, starting with the “difficult, dirty, heavy work” he was used to, until retiring at age 66 after 32 years with the company.

“He’s truly remarkable for his age,” Perkins said. “Knowing my dad, he will surpass his goal and continue his invigorating walks, as long as the donations keep coming in.”

About the Author: Debora Kelly

Debora Kelly is NewmarketToday's community editor. She is an award-winning journalist and communications professional who is passionate about building strong communities through engagement, advocacy and partnership.
Read more