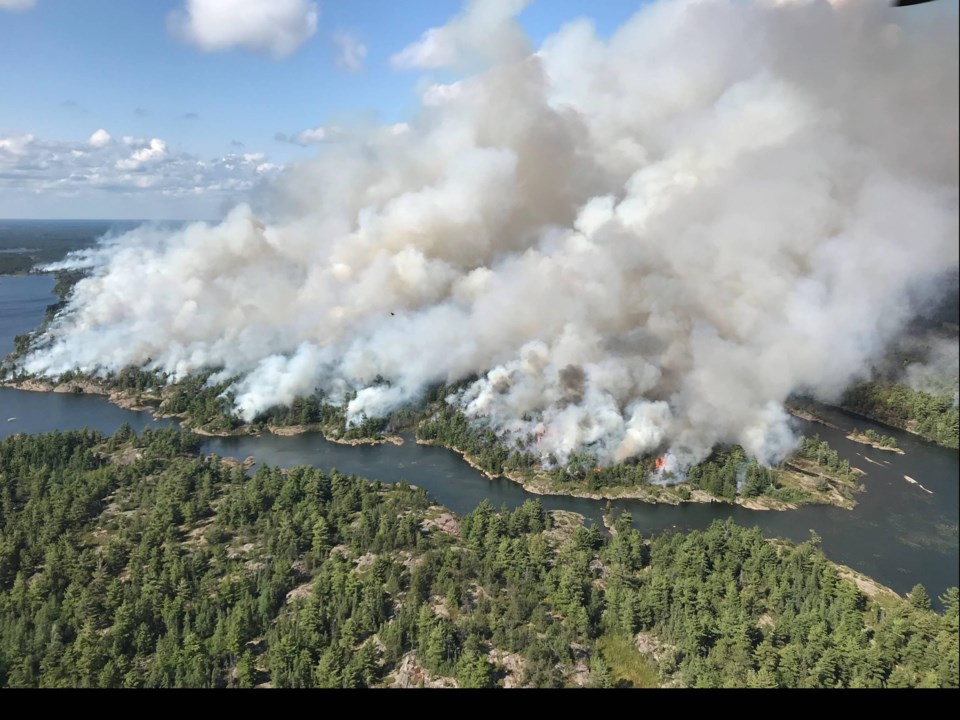 The Parry Sound 33 forest fire was discovered on July 18, and grew rapidly to more than 11,000 hectares in less than a month, forcing evacuations, road closures, and bringing in firefighters from around the country and beyond to help battle the blaze. (File)

A disabled vehicle in a remote area of Henvey Inlet was to blame for last summer's massive Parry Sound 33 forest fire, the Ministry of Natural Resources and Forestry said in a Feb. 22 press release, but the company who owned the vehicle has been found not to be at fault for causing the fire.

The MNRF said it has completed its extensive investigation into the Parry Sound 33 wildland fire.

The ministry's team of investigators found that the fire originated at the location of a disabled vehicle in a remote area of Henvey Inlet. Assistance was sought from a forensic fire expert.

While the investigation was able to determine the origin of the fire, no provincial offence under the Forest Fires Prevention Act was found to have been committed, the press release said.

The Parry Sound 33 forest fire was discovered on July 18, and grew rapidly to more than 11,000 hectares in less than a month, forcing evacuations, road closures, and bringing in firefighters from around the country and beyond to help battle the blaze.

It wasn't officially declared out until Oct. 31.

In a CBC article from last July, workers with the large wind-turbine project under construction on Henvey Inlet First Nation speculated that the project was to blame for the fire.

They said despite tinder-dry conditions and a fire ban, crews for the Henvey Inlet Wind Project continued to blast rock and use heavy machinery, setting off several small fires.

They told CBC they heard on a two-way radio there was an Argo (all-terrain vehicle) that broke down in the bush where the fire began.

"I think that the job should be shut down," the worker reportedly told CBC reporter Dave Seglins. "I think those that they knew the consequence of this (and) just kept going and ignored the problem at hand ... should be held responsible for this."

CBC also reported that forensic investigators seized a crew's Argo all-terrain vehicle that caught fire at the very spot Parry Sound 33 was believed to have ignited.

ONTARIO: Provincial budget deficit projected to jump to $38.5B in 2020-2021
Aug 12, 2020 1:15 PM
Comments
We welcome your feedback and encourage you to share your thoughts. We ask that you be respectful of others and their points of view, refrain from personal attacks and stay on topic. To learn about our commenting policies and how we moderate, please read our Community Guidelines.