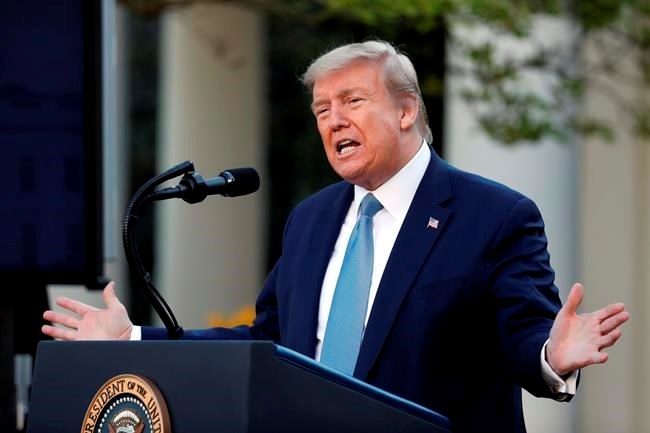 WASHINGTON — President Donald Trump signalled Wednesday that he's prepared to support easing travel restrictions along the Canada-U.S. border sooner rather than later — although the feeling may not be mutual, given the extent of the COVID-19 outbreak in the United States.

Canada is "doing well" in its efforts to control the spread of the virus, Trump said during his daily media briefing at the White House.

In the same breath, however, the president — who makes no secret of his urgent desire to see the American economy come roaring back to life — seemed to equate Canada's success with efforts in the U.S., a comparison sure to raise eyebrows north of the border.

"Our relationship with Canada is very good — we’ll talk about that. It will be one of the early borders to be released," the president said. "Canada’s doing well, we’re doing well — so we’ll see."

The two countries negotiated a mutual ban on non-essential travel in both directions in mid-March, an agreement that explicitly exempted the flow of trade and commerce, as well as vital health care workers like nurses who live and work on opposite sides of the border.

That agreement is currently due to expire early next week. Other travel restrictions, such as a U.S. ban on foreign nationals arriving from a long list of European countries, are likely to remain in place a while longer, Trump said.

"We have a lot of nations that are heavily infected — some are getting better, (but) some are still on the way up, unfortunately. We’re keeping very strong borders with those nations," he said.

"But with Canada, we are talking about different things."

If indeed the U.S. is anxious to lift the restrictions, the dramatic imbalance in the outbreak's severity in the two countries — the U.S. has more than 560,000 active cases, the most in the world, while Canada's caseload is just over 18,000 — could put the federal government in an awkward position.

Earlier Wednesday, Prime Minister Justin Trudeau made it clear that efforts to control the spread of the virus in Canada are likely to remain in place for several more weeks. And on Tuesday, the government tightened its self-isolation requirements for those arriving from outside the country's borders, making an extended hotel stay mandatory for anyone without a suitable quarantine plan.

Widespread testing and the ability to rapidly track down the contacts of infected people will be key to an eventual return to normal activities, Trudeau said.

"We have to be through this first wave sufficiently to be able to know we have the capacity to stamp out and restrict any future outbreaks as they come along," he said.

"That means technology, that means better testing capacity, that means continued vigilance — not just by governments but by all Canadians.... We're still a number of weeks away from that."

This report by The Canadian Press was first published April 15, 2020.