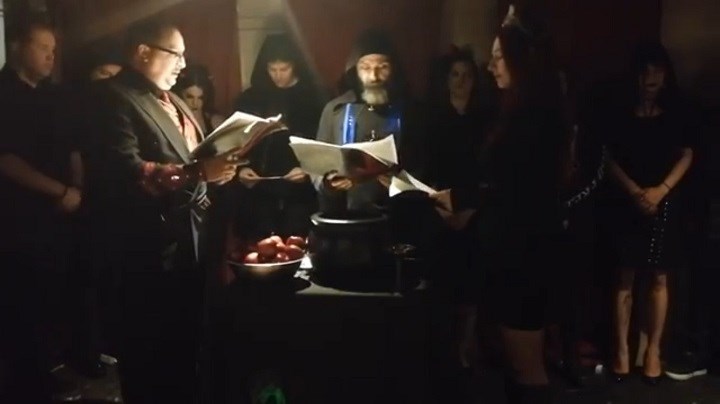 It’s a controversial ritual with a gruesome history, but Canadian members of the Satanic Temple say ‘black mass’ isn’t anything to be afraid of — calling it “an expression of personal liberty and freedom.”

“That freeing expression is found in the blasphemy,” explained Nicholas Marc, the national co-ordinator for the Satanic Temple in Canada.

He has been running the group out of Ottawa since 2016. Marc is also the organizer behind the ceremony, which will be held in the capital on Aug. 17.

“To (the Satanic Temple’s) knowledge this will be the first organized public black mass in Canadian history,” Marc told Global News.

What is ‘black mass’?

How to perform a ‘black mass’ depends on whom you ask, but there is one element that most experts agree on: At nearly every event, there is a desecration of Christian symbols.

“It’s not meant to be an attack on another group. It’s supposed to be cathartic for those who practice it,” said Marc.

“Essentially, it involves using traditional symbols and inverting them to create a ritual that is meant to be the opposite of traditional mass.”

But the history, legends, and rumors behind said ritual appear much darker. Dating back centuries, there are stories of demon worship, ‘deviant’ sex, consuming a black host, blood or urine in lieu of wine, and even child sacrifices.

According to British historian Richard Cavindish, who studied occultism and religion, ‘black mass’ was written about “more often in fiction than in real life.”

But it’s the first recorded black mass that may be the darkest. Dating back to the court of Louis XIV of France, he is said to have sacrificed a baby in hopes of preserving his love for his mistress,

READ MORE: The rise of the Satanic Temple in Canada

“There’s the use of symbols and Latin text, but we do not believe in harm to any being what so ever,” said Marc, adamant The Satanic Temple does not perform sacrifices.

Instead, the group’s mission is described as facilitating “the communication and motivation of politically aware Satanists, secularists and advocates for individual liberty.” Literature also states members of The Satanic Temple do not worship the devil.

“For the most part, they are using Satan as a symbol, as a metaphor,” said Cimminnee Holt, a lecturer at Concordia University in Montreal who specializes in modern religious Satanism.

“Most of them are atheists — not all. But even those that aren’t atheists still aren’t conceiving of Satan as a cosmic evil.”

Still, the idea of the black mass and Satanism stirs up controversy. In 2014, a Harvard University student group’s plans to host a black mass on campus were cancelled after public outcry.

Marc said the backlash is no surprise to him, adding he hopes people educate themselves before attending the ‘black mass’ in Ottawa.

“We want to make sure people come for the right reasons,” he said, noting he had to get approval from the Satanic Temple’s National Council to perform the mass.

With 50 spots for the ritual, he expects the event will sell out quickly. This comes as no surprise to the former Christian. In a Global News story from July, he said interest in the temple has exploded.

“We have to put a moratorium on new chapters because we literally have too much growth right now,” he told attendees at Ottawa heavy metal bar called The Koven, the same location where the ritual will be held.

In Toronto, member Jen Saxena said she is thrilled Canada will be holding a ‘black mass.’

“It’s pretty exciting honestly. It’s really cool that so many people are taking interest in this,” she said.

Saxena, who told Global News she has been a satanist since 1994, said modern ‘black mass’ is open for interpretation.

“It is customized to the group and the occasion. More frequently people are writing their own rituals and their own symbolism,” she said.

“These days people aren’t coming from (a Christian) background, and so forming a mass around that doesn’t speak to them.”

“I certainly hope to go to the black mass but if we can’t get to Ottawa, we will be pursuing own events in the future,” she said, adding she hopes the Toronto group, which has grown to 150 members, will soon become an official chapter.

Saxena said the decision will be up to Marc as well as the leaders of the temple.

“They are looking for steady leadership, group management, focus on community management and fellowship,” she said.

The rise of the Satanic Temple

What started out as a small, mostly virtual satanic group has since grown over the last six years into an international movement that boasts more than 100,000 members. It has 18 official chapters in the U.S. and is known for its provocative demonstrations for free speech, religious freedom and LGBTQ2 rights. Awareness comes through word of mouth and the internet, not through formal recruitment or proselytization.

The Satanic Temple’s headquarters is currently in Salem, Mass., in a restored Victorian home a mile away from Gallows Hill, the site where Puritans executed dozens of people accused of witchcraft in the 17th century.

The group abides by seven “fundamental tenets,” including that “one’s body is inviolable, subject to one’s own will alone” and “the freedoms of others should be respected, including the freedom to offend.”

Within a year of its formation, the Satanic Temple achieved notoriety for hosting a “pink mass” at the gravesite of the mother of Fred Phelps, founder of the anti-gay Westboro Baptist Church. The “pink mass” was an example of extreme trolling, and involved same-sex couples kissing over the grave as a ceremony to make Phelps’ mother “gay in the afterlife.”

The group grabbed international headlines and attracted hoards of new followers in 2015 when it unveiled its eight-foot-tall bronze statue of Baphomet, a winged goat creature of occult lore, in what was described as the “largest public satanic ceremony in history.”

Group members had unsuccessfully tried to install it next to a monument of the Ten Commandments at the Oklahoma Capitol in protest against the religious symbol on government grounds.

In the end, the Oklahoma Supreme Court ordered the Ten Commandments monument to be taken down as it violated state laws on the separation of church and state. The group saw it as a win.

In April, it was designated as an official tax-exempt church by the Internal Revenue Service in the United States.

“This acknowledgment will help make sure The Satanic Temple has the same access to public spaces as other religious organizations, affirm our standing in court when battling religious discrimination, and enable us to apply for faith-based government grants,” the group wrote in a post on Instagram.

As for whether the Satanic Temple has staying power, specifically in Canada, Holt said that remains to be seen. But because the Temple is tackling important and topical issues of the day, that will contribute to its longevity and relevance.

“A new religion always emerges as a response to negotiating the demands of modern society. They are emerging as something they see as lacking,” Holt said.

“They are always reflecting contemporary ideas. As long as they continue to be invested in challenging those issues, I certainly think they will have an audience for that. Whether or not that lasts five, 10, 100 years, no scholar knows.”

Meanwhile, the Satanic Temple in Canada continues to grow and Marc said his members are doing their part to give back to the community, supporting local charities, an effort continuing even at ‘black mass.’

“This also is a sock drive for the homeless shelter,” said Marc, who is asking attendees to bring a pair for $5 off the $20 admission.

This is something Saxena said she isn’t surprised to hear, explaining it’s the type of values the Satanic Temple wants to portray.

“They want to ensure we bring people together in a positive way,” she said.

Those hoping to attend the event will have to pre-register through the Ottawa chapter of the Satanic Temple’s Facebook group.