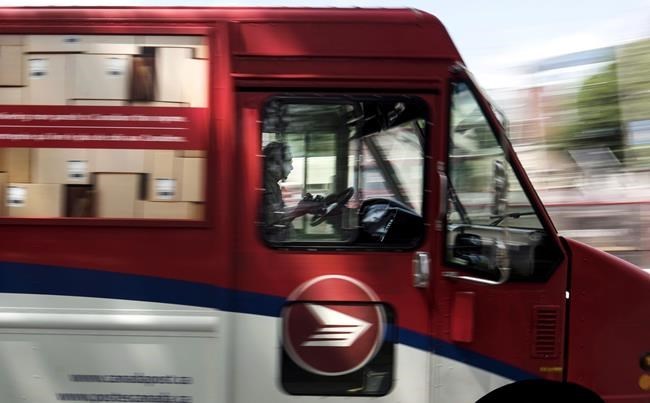 OTTAWA — Parcel delivery is booming, but Canada Post says it will struggle to meet its government-mandated goal of self-sustainability in coming years due to an ongoing decline in letter mail, higher employee costs and billions in needed capital spending.

In a corporate forecast quietly tabled in Parliament, the Crown corporation says it is expecting to achieve "modest" profits of between $10 million and $125 million from 2019 through to 2023 — but those will be driven primarily by its Purolator subsidiary, while the base Canada Post segment will post losses.

"Although Canada Post is in a financially viable position today, the forecasted growth in parcels revenue will not be enough for the Canada Post segment to achieve profitability throughout this plan's period, nor will it be enough to make Canada Post financially self-sustaining in the long term," the document says.

The "key strategic issue" for Canada Post is to chart a course to achieve sustainability goals the Liberal government identified in early 2018 after a review of Canada Post's mandate, it says, adding it will require government attention to do so.

The plan addresses several priorities from government, including the order to end the Harper Conservatives-era program (suspended during the review) to replace door-to-door deliveries with community mailboxes.

The document says Canada Post has spent about $4.7 million since last summer to dismantle 2,280 community mailbox sites in 12 municipalities where it had begun but didn't complete the conversion, including removing modules, pads and retaining walls and replacing curbs which had been cut to allow access.

The five-year plan estimates Canada Post will need to invest $3.6 billion to keep up with the growth of e-commerce shipping while modernizing to meet shipper and customer expectations and stay ahead of competitors.

Meanwhile, employee costs are rising, in part due to a rural pay equity ruling last fall identified as the main cause of an estimated $264 million loss in 2018.

The ruling is expected to add $140 million in annual costs going forward.

Canada Post says it expects to have to increase borrowing by about $500 million by 2023 to cover capital needs and to make special employee pension plan solvency payments, expected to start at over $500 million in 2020 and total over $1.8 billion by 2023.

It forecasts a post office sector loss of $22 million for 2019 as total revenue grows 3.5 per cent or $234 million to about $7 billion. It says a 13 per cent increase in domestic parcel volume will be offset by a drop in letter mail activity of about five per cent.

The Canadian Union of Postal Workers said it had no one available on Tuesday to comment on the corporate report.

Postal workers went on rotating strikes in late October, but about a month later the Liberals legislated an end to job action due to a growing backlog of parcels ahead of the holiday shopping period.

In January, Canada Post raised the price for an individual stamp on a letter sent within Canada by a nickel to $1.05, while imposing other increases for mail within the country by between a dime and 35 cents.

The new rates were the first increase since March 2014 and were expected to generate $26 million in new revenues.

- By Dan Healing in Calgary

ONTARIO: Province strikes deals with French-language, elementary teachers' unions
Apr 1, 2020 9:32 AM
Comments
We welcome your feedback and encourage you to share your thoughts on this story. We ask that you be respectful of others and their points of view, refrain from personal attacks and stay on topic. To learn about our commenting policies and how we moderate, please read our Community Guidelines.